Twin Facebook pages advertise themselves as providing newsy and up-to-the-minute coverage of Russia’s war in Ukraine. But on a given day, their followers might see videos claiming Norwegians raided Russian ships, Vladimir Putin was defeated on "all fronts," or that a single British ship blocked a Russian fleet.

None of those headlines are true. But that doesn’t stop the pages Fios Vinks and Fiosl Liesi from earning clicks, views and a monetizable following through false reporting on the war.

The behavior of these obscure pages with their difficult-to-decipher names offers a case study of organized misinformation in one of its cheapest forms. Combined, these pages distribute dozens of videos a day — many plucked from YouTube and paired with sensational headlines — that aim to funnel viewers into larger Facebook groups that could be sold to buyers seeking large social media audiences. The pages appear to be part of a larger network and managed by a single, anonymous account. Their campaigns spread fast, outpacing fact-checks and creating confusion.

"It's a parasitic network that's trying to monetize the invasion of another country," said Emerson Brooking, a resident senior fellow at the Digital Forensic Research Lab of the Atlantic Council.

After fact-checking videos from both pages multiple times, PolitiFact wanted to learn more about the origins of the pages, their prolific posting patterns, and what their endgames might be.

PolitiFact reached out to both Facebook pages and did not receive a response.

Fios Vinks and Fiosl Liesi were created two days apart in late March 2022, almost a month after the Russian invasion of Ukraine began. The accounts share several videos a day, each posting around 50 videos per week.

There is no original content. Instead, the pages lift videos from several YouTube channels — never linking to the original videos.

Copying content from other platforms "is a big way that coordinated disinformation campaigns are able to produce a lot of content without having to produce it themselves," said Jo Lukito, assistant professor at the University of Texas at Austin’s School of Journalism and Media.

The format of their video posts is nearly always the same: a clickbait caption ("Putin is Crying!" or "BIG EXPLOSION"), a thumbnail with relevant photos (Putin, fiery backdrops, weaponry), and large, urgent text proclaiming "Breaking News." 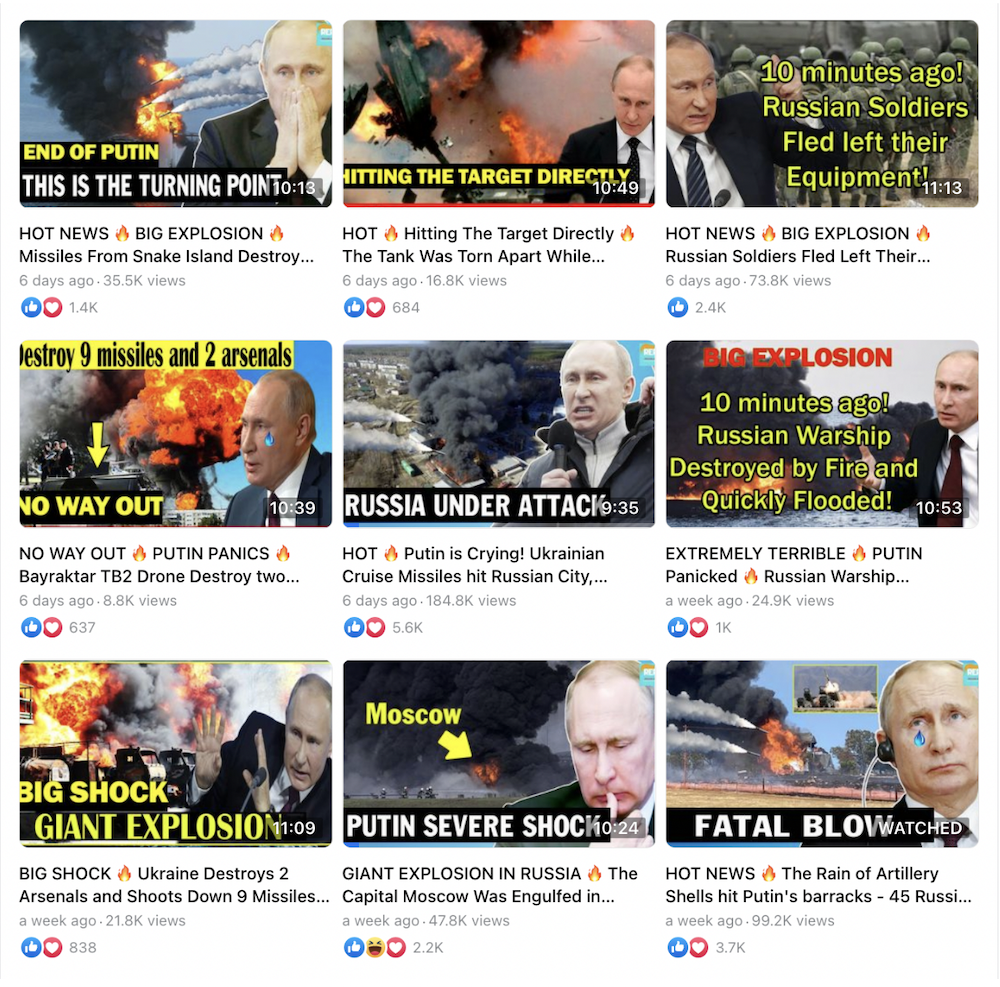 Viewers are shown eight to 12 minutes of often unrelated footage through monotone, robotic narration. The clicks come anyway; Fios Vinks’ highest-viewed video in one week garnered 227,000 views. Fiosl Liesi’s June 23 post video titled "GIANT EXPLOSION IN RUSSIA! PUTIN Panicked!" has more than 1.2 million — even though there was no missile attack on a Russian gas station, as described in the video.

Sometimes, the headlines are loaded with specifics that give off a whiff of credibility. Without knowledge of artillery and eastern Ukraine, it would be hard to verify a recent headline that claimed the Ukraine army intercepted a "TOS-1A rocket launcher" and "destroyed Russia T-72B tank near Derhachi."

Other videos miscaption historic events. A video of a 2018 mall fire was used to claim that Moscow was a "sea of fire" after a missile attack, which we rated Pants on Fire. Another took a 2020 incident when Russian bombers approached Alaskan airspace and claimed it happened "12 minutes ago!"

"That sort of imminency does make people click," said Brooking of the Atlantic Council. "There aren’t that many situations in which you can repeatedly get away with it, but you certainly can in the context of war." 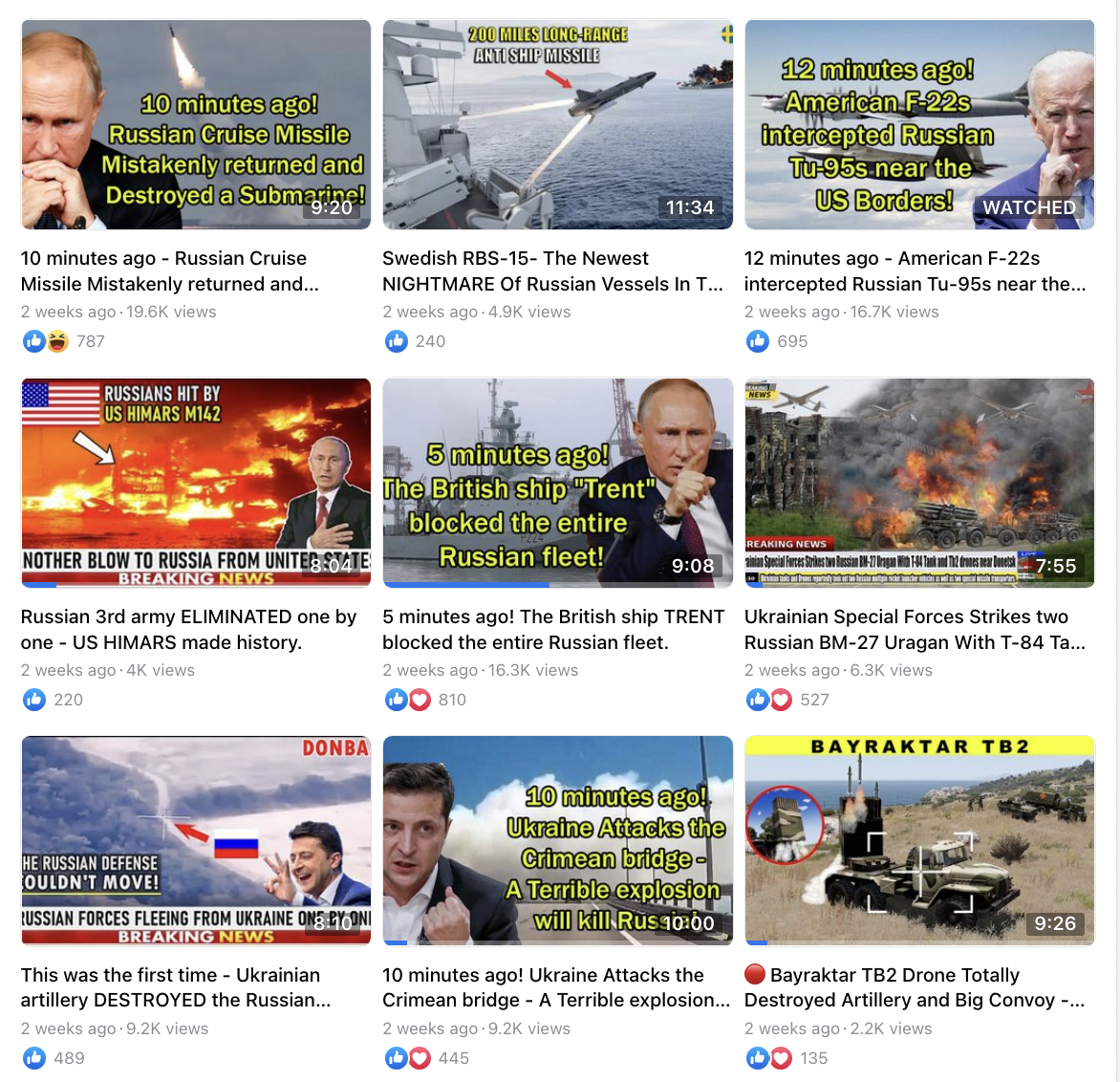 The content on Fios Vinks and Fios Liesi is sympathetic to Ukraine, occasionally celebrating the heroics of Ukrainian soldiers or exaggerating Russia’s failures. But the overall goal doesn’t seem to be propaganda.

The pages could be making money, though not through the videos themselves. (We did not find in-stream ads in our search.)

Both groups began in August 2021, six months before the war, and previously had Vietnamese names. "Ukraine Vs. Russia" used to be called "Mua Bán Acc Liên Quân Mobile," according to the page’s transparency information on Facebook — and people used it to buy and sell video game accounts. "BREAKING NEWS UKRAINE VS RUSSIA" once went by a name that translates to "Vietnam Beverage Mixing Association," where vendors sold items like old cash registers, tea carts, and custom coasters.

Despite their disparate beginnings, information for both groups shows they are owned by the same account — a user with nine followers who goes by the name "Vanessa Oliveira" — and ​​have shared administrators, and post similar, if not identical, content about the war. The groups have 75,100 and 62,400 members, respectively.

Our reporting uncovered several more Facebook pages that share similar videos, and use their comment sections to direct users to join the same pair of Facebook groups. Both Lukito and Brooking suspect these pages are all part of the same network.

Experts said it is not uncommon for pages seeking profit to build large groups based on one newsworthy topic, and in the future, pivot the content of the group to advertisements and spam, or sell the group itself to a buyer who is eager for the attention of its thousands of existing followers. Other social media platforms see this behavior, too.

"The group is a valuable financial asset," said Brooking.

Facebook does not remove content or pages from the platform just because it contains misinformation. The false claims must be considered harmful to violate Facebook’s Community Standards.

But tactics of "audience harvesting," as Brooking describes it, could be in violation of Facebook’s rules against "inauthentic behavior," which includes misleading users about the ownership, purpose, or origin of the content.

The pages are penalized — but not taken down — when videos they share are fact-checked as false by third-party fact-checkers, including PolitiFact. Penalties include limited monetization, removal from recommendations, and being demoted in News Feeds. (PolitiFact identified many of the videos in this story through its partnership with Facebook. Read more about our partnership here.) In extreme cases, Facebook will give users a warning that an account frequently produces misinformation.

But beacuse of the volume of videos being posted by pages like Fios Vinks and Fiosl Leisi, many false claims and videos go unchecked. And by disseminating the same posts across several pages and accounts, it makes networks like these more durable if one page gets fact-checked too many times.

In practice, the approach to moderating these accounts mimics whack-a-mole. Over the course of our reporting, Fios Vinks began directing followers to a new Facebook group: Breaking News Todays.

"Unfortunately, it's a perennial feature of war in the social media age," said Brooking. "I think the best we can do is expect it."

Interview with Emerson Brooking, Resident Senior Fellow at the Digital Forensic Research Lab of the Atlantic Council, July 11 and July 13, 2022

Interview with Jo Lukito, Assistant Professor at the University of Texas at Austin’s School of Journalism and Media, July 12, 2022

NPR, "Here's how propaganda is clouding Russians' understanding of the war in Ukraine," March 15, 2022