From her desk in the heart of the West Wing, just seconds away from the Oval Office, Cassidy Hutchinson was privy to pivotal conversations among former President Donald Trump and his inner circle of staff and advisers.

On June 28, Hutchinson, the executive assistant to former White House chief of staff Mark Meadows, sat before House select committee investigating the Jan. 6 attack on the U.S Capitol and shared what she saw and heard in the lead-up to — and aftermath of — the insurrection.

What emerged was a picture of a president who knew that violence was likely on Jan. 6, 2021, and behaved as if the rioters were doing nothing wrong. Hutchinson described moments when she said Trump’s frustrations boiled over into physical violence.

Beyond Hutchinson’s testimony, committee vice chair Rep. Liz Cheney, R-Wyo., raised the specter of witness tampering by Trump associates, adding the possibility of a new criminal charge to the ones of obstruction and fraud already in play.

Here are the key moments from the hearing.

Hutchinson described a conversation on the night of Jan. 2, 2021, with Meadows. She had just walked Trump’s private adviser Rudy Giuliani to the White House exit. As he was leaving, Giuliani asked her if she was excited about Jan. 6. "We’re going to the Capitol," Giuliani said to her, Hutchinson recounted. "It's going to be great."

Puzzled, Hutchinson went back to the West Wing and asked Meadows what Giuliani meant.

"There's a lot going on," Meadows said, according to Hutchinson. "Things might get real, real bad on Jan. 6."

"That was the first moment that I remember feeling scared and nervous for what could happen on Jan. 6," Hutchinson testified.

Two days later, on Jan. 4, Hutchinson said, the White House National Security adviser asked to speak to Meadows about information he was getting about potential violence on Jan. 6.

Hutchinson told the committee that on Jan. 5, the Secret Service was getting reports of weapons and violence expected the next day.

Takeaway No. 2: Notice of an armed crowd

The committee shared recordings of police chatter from inside the crowd as thousands gathered for Trump’s speech on the Ellipse near the White House. Officers reported that they’d spotted men with AR-15-style weapons and handguns. They saw a man with a handgun in a tree.

"Make sure PPD (Park Police) knows they have an elevated threat in the trees south side of Constitution Avenue," said one radio transmission. 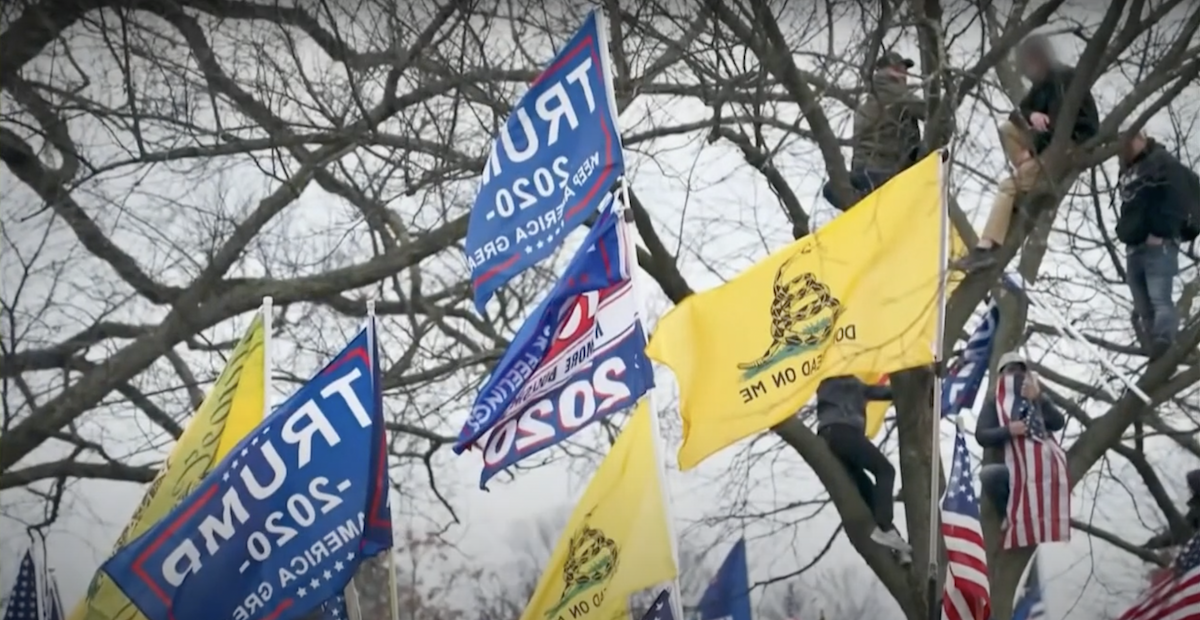 Law enforcement officers spotted a man with a handgun in a tree where protesters gathered before marching on the U.S. Capitol Jan. 6, 2021. (Jan. 6 Committee)

"I got three men walking down the street in fatigues carrying AR-15. Copy at 14th and Independence," said another.

At a 10 a.m. meeting with Meadows and Tony Ornato, the top White House aide for security, Ornato told Meadows about the prevalence of weapons among the attendees. "I remember distinctly Mark not looking up from his phone," Hutchinson said.

Meadows asked if Ornato had told the president. Ornato said he had.

Meadows "did not act on those concerns," Hutchinson said.

Minutes before Trump spoke to his followers, Hutchinson said, Trump expressed anger that the secured space in front of the stage was not packed with people. When he was told that many people didn’t want to pass through security because they would have to give up their weapons, Hutchinson said Trump was dismissive.

"I don’t effing care that they have weapons," Trump said, according to Hutchinson. "They're not here to hurt me."

She said Trump also ordered the removal of security metal detectors: "Let the people in. They can march to the Capitol from here," she recalled Trump saying.

Trump has insisted that the rioters were unarmed. A year ago, he told Fox News that "there were no guns whatsoever" on Jan. 6. We rated that False. It’s been an often-repeated claim from Trump supporters.

After Hutchinson’s testimony, Trump took to his social media platform, Truth Social, and narrowed his rebuttal.

"There were no guns found or brought into the Capitol Building," he posted June 28. It's not clear that firearms were found inside the building. But prosecutors have charged rioters who were caught with firearms on the grounds of the Capitol.

At the rally on Jan. 6, Trump urged his followers to march to the Capitol, and said he would join them. By Hutchinson’s account, Trump sincerely meant it.

But when Trump got into the presidential vehicle on the Ellipse, he thought he was headed to the Capitol. When he was told he wasn’t, he grabbed for the steering wheel and a Secret Service agent pulled Trump’s hand away, Hutchinson said, recounting information that she said Ornato told her when she, Ornato and the agent met afterward.

With his other hand, Trump lunged for the area around the agent’s throat, she said.

Takeaway No. 4: Trump didn’t want to stop the riot

The committee has spoken about the 187 minutes that passed before Trump sent a video message telling his supporters to leave the Capitol. What Hutchinson’s testimony added was the desperation some at the White House felt to try to get Trump to react earlier than that.

By 2 p.m. on Jan. 6, the Capitol Building was being overrun by rioters. Trump was in the White House’s Oval dining room, Hutchinson said. White House Counsel Pat Cipollone walked into Meadows’ office and pressed for a meeting with Trump.

"And Mark looked up at him and said 'he doesn't want to do anything, Pat.' And Pat said something to the effect of, 'Mark, something needs to be done or people are going to die and the blood is going to be on your effing hands’," Hutchinson told the committee.

Hutchinson said Cipollone tried Meadows again, seeking to get Trump to call off the attack.

"They're literally calling for the vice president to be effing hung," Cipollone said to Meadows, Hutchinson told the committee. "And he responded, something to the effect of, 'You heard him, Pat. He thinks Mike deserves it. He doesn't think they're doing anything wrong.’"

In an earlier hearing, the committee showed an email from Rep. Mo Brooks, R-Ala., seeking a presidential pardon for anything he and other members of Congress might have done that broke the law. Hutchinson said several other congressmen also reached out to her seeking pardons.

Takeaway No. 6: Potential evidence of efforts to influence testimony

In her closing remarks, Cheney said investigators had seen a troubling pattern.

"Our committee commonly asks witnesses connected to Mr. Trump's administration or campaign, whether they've been contacted by any of their former colleagues, or anyone else who attempted to influence or impact their testimony," Cheney said.

Then, she showed two responses from two unidentified witnesses who said they had been contacted.

One told the committee: "They reminded me a couple of times that Trump does read transcripts, and just keep that in mind as I proceed through my interviews with the committee."

Another witness shared a message they received that said: "He wants me to let you know, he's thinking about you. He knows you're loyal. And you're going to do the right thing when you go in for your deposition."