Greeks don’t trust their media. Fact-checkers are trying to help

The Parthenon in Athens. (Louis Jacobson/PolitiFact)

ATHENS, Greece — Dubious news and online content is everywhere. Even here, in the birthplace of democracy.

The challenges facing media outlets across the globe are many, including widespread public distrust, dubious claims spreading virally on social media, and a broken economic model for the news industry. But while these problems are common in many countries, they appear to be particularly severe in Greece.

A survey of the Greek population conducted by George Siakas at the University of Macedonia found that a wide majority of respondents — 74% — trusted Greek journalists either "only a little" or "not at all."

The same survey also found that less than one-third of respondents thought the public should have to pay for the journalistic content they consume, which would hamper efforts to provide more professionalized journalism. And a whopping 92% believed that journalists in Greece were too dependent on the government or political parties.

The results were released at an early October conference in Athens to which PolitiFact was invited.

Such attitudes are notably stronger in Greece than in other countries, according to separate research presented at the Athens conference by Antonis Kalogeropoulos, a lecturer in communication and media at the University of Liverpool in the United Kingdom and a research associate at the Reuters Institute for the Study of Journalism at the University of Oxford.

In Greece, only 27% of survey respondents said they trusted the media most of the time, which tied for the second-lowest score among the 24 European countries studied. It was also lower than all but two of the 22 countries surveyed in Africa, Asia, and the Americas.

The United States was one of the rare countries that ranked lower than Greece, at 26%.

Greece was the only one of 10 advanced industrialized nations surveyed in which respondents said that social media does a better job separating fact from fiction than traditional media outlets do. To be sure, neither type of media fared well: 28% of respondents in Greece said that social media did a good job at separating fact and fiction, while 19% said the same of traditional media.

Compared with northern and western European countries where trust in institutions is higher, "we do come from another place," said Stelios Pournis, a journalist with the Greek fact-checking site Ellinika-Hoaxes. 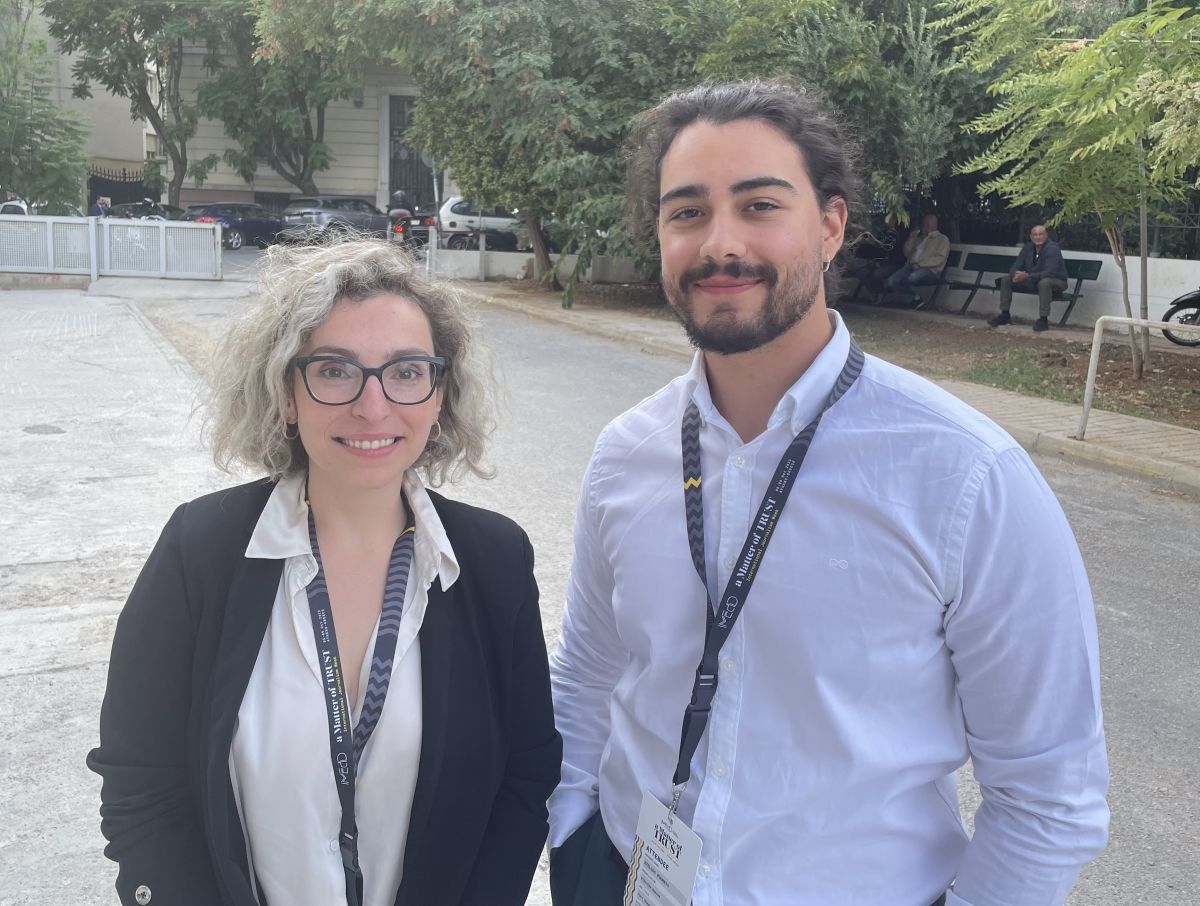 Conversations with journalists in Athens point to several factors that have made a lack of trust in journalism an unusually big problem in Greece.

One is the Greek economic and debt crisis, which began in 2009 and involved government dissembling and broken promises. "The majority of the Greek population suffered and keep suffering" from the economic crisis, said Anna-Kynthia Bousdoukou, co-founder and managing director of the three-and-a-half-year-old non-profit journalistic organization iMEdD (Incubator for Media Education and Development), which organized the Athens conference. "They felt people had lied to them — it was a huge trauma. They lost any trust they may have had in the media and politicians." 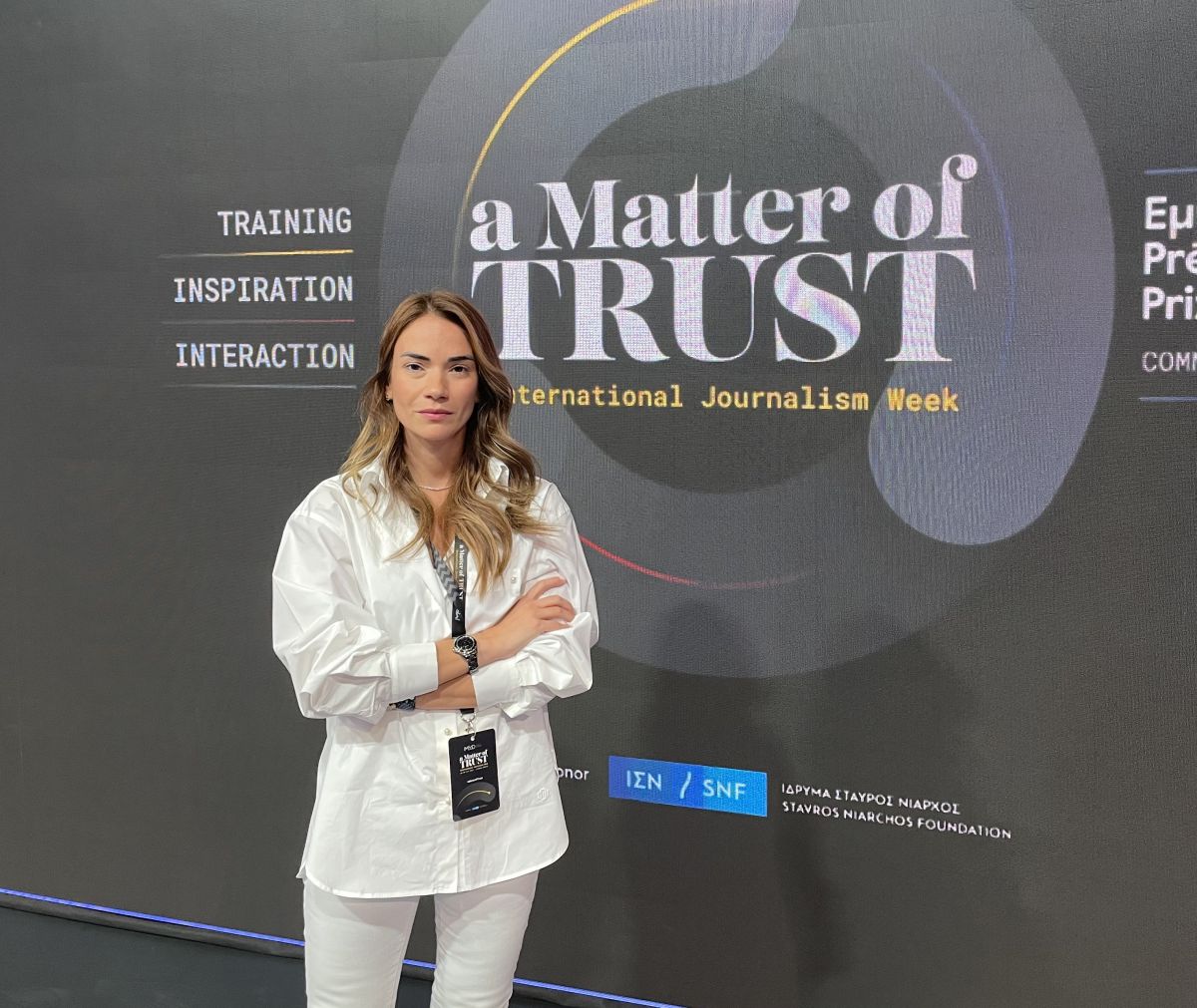 Recently, revelations that the government has wiretapped journalists as well as members of other political parties have exacerbated public concerns about trust, journalists here said.

Yet at the same time, many Greeks feel that the media is too closely aligned with the government. This sentiment is reinforced by the close connections between media barons and political leaders, and by the media industry’s increasing dependence on state advertising to pay its bills.

"The government has an organized plan for government advertising, by favoring or excluding media, so as not to face strong criticism on any claim," said Manos Horianopoulos, editorial director at the website News247.gr. "The media, due to the years of economic crisis, often do not have the power to resist what the government wants." 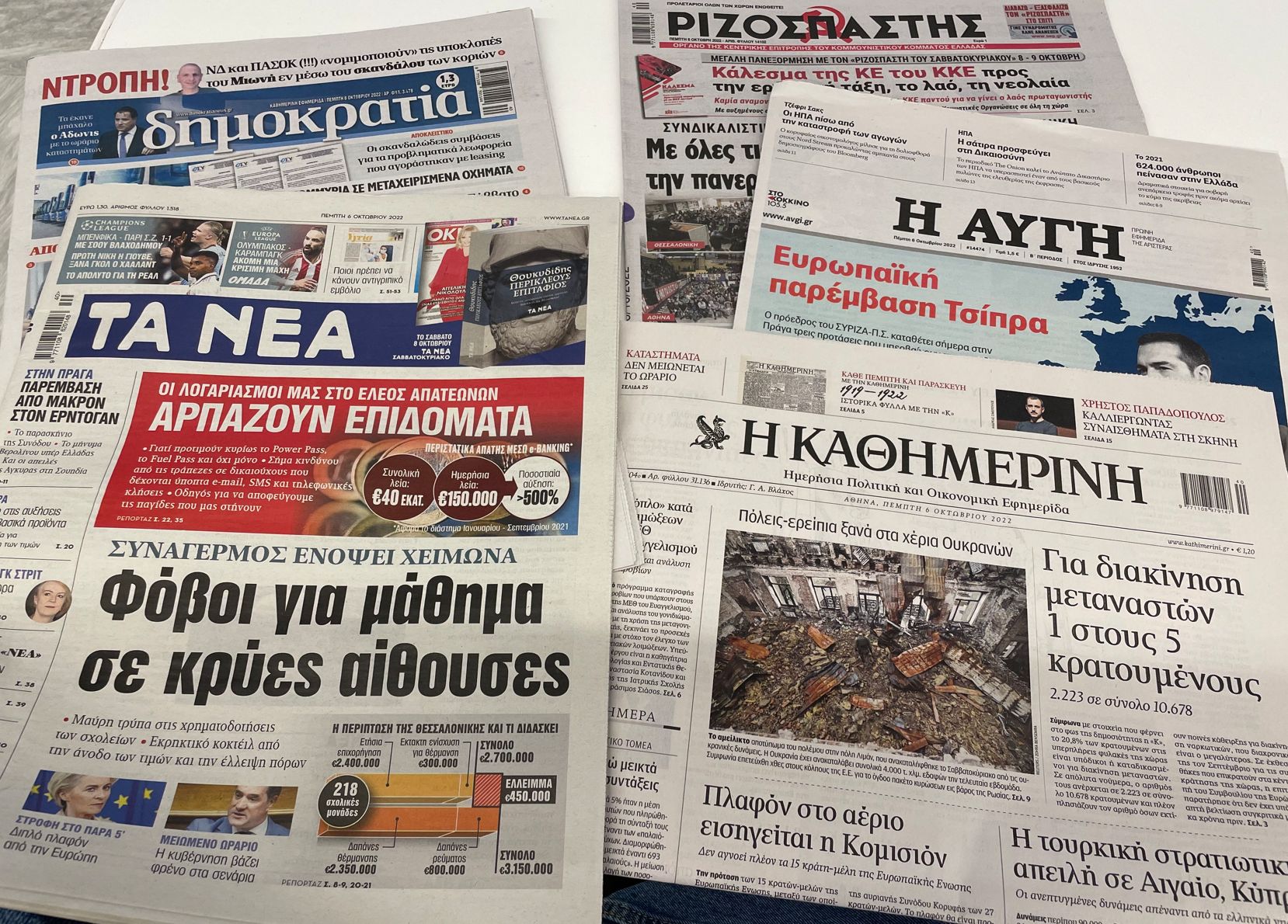 Katerina Lomvardea, the editor-in-chief of Inside Story, a Greek-language digital news magazine that focuses on investigative and explanatory journalism, agreed. "Greeks will always find a reason to distrust anyone, and truth be told, many Greek media outlets have done their best to amplify this tendency," she said.

Research by Siakas of the University of Macedonia confirms that not only the Greek public, but also Greek journalists, have a dim view of the profession.

When a sample of Greek journalists were asked whether they felt the journalistic work by their colleagues was "commendable," 58% disagreed either somewhat or strongly. Almost two-thirds of journalists surveyed said their superiors distorted their work at least some of the time.

Meanwhile, 80% of journalists surveyed said they self-censored their writing at least some of the time. And more than 90% of journalists said the Greek media are too dependent on the government or political parties, which puts journalists essentially in line with the view of the public at large.

Into this void has flowed a torrent of misinformation, Greek journalists say.

Alexis Papahelas, executive editor of Kathimerini, a prestigious newspaper in Athens, said misinformation is "a big problem. Conspiracy theories, especially regarding vaccines for the coronavirus, were extremely widespread. There are outlets that specialize in this, and unfortunately there is very little response from traditional media or civil society."

Spyridoula Markou, a journalist with the fact-checking site Ellinika-Hoaxes, said that even social media posts about QAnon — which would seem to be a quintessentially American phenomenon focused on Donald Trump and his supposed enemies — have become popular in Greece, alongside debunked claims that former first lady Michelle Obama is a man. Longstanding tensions between Greece and Turkey have also been an accelerant for online misinformation, she said.

"It’s become easy to promote messages like this here in Greece," Markou said.

So far, traditional news outlets have not invested in fact-checking with any consistency. Still, a variety of new outlets have flowered here, including partnerships between journalists, academics, and nongovernmental organizations.

One is Check4Facts.gr, which went live in June 2022. Several groups collaborated on the project, including the National Center for Social Research, the National and Kapodistrian University of Athens, and the Athena Research Institute, with funding from the Hellenic Foundation of Research and Innovation.

The site began by fact-checking claims on two topics, immigration and crime, which have been major issues in Greece for several years following an influx of refugees from the Middle East. In the coming months, the site plans to add coverage of health and climate change. Staffed by a mix of journalists and academic researchers, the site rates statements as "accurate," "relatively accurate," "relatively inaccurate," "inaccurate," and "unverifiable." 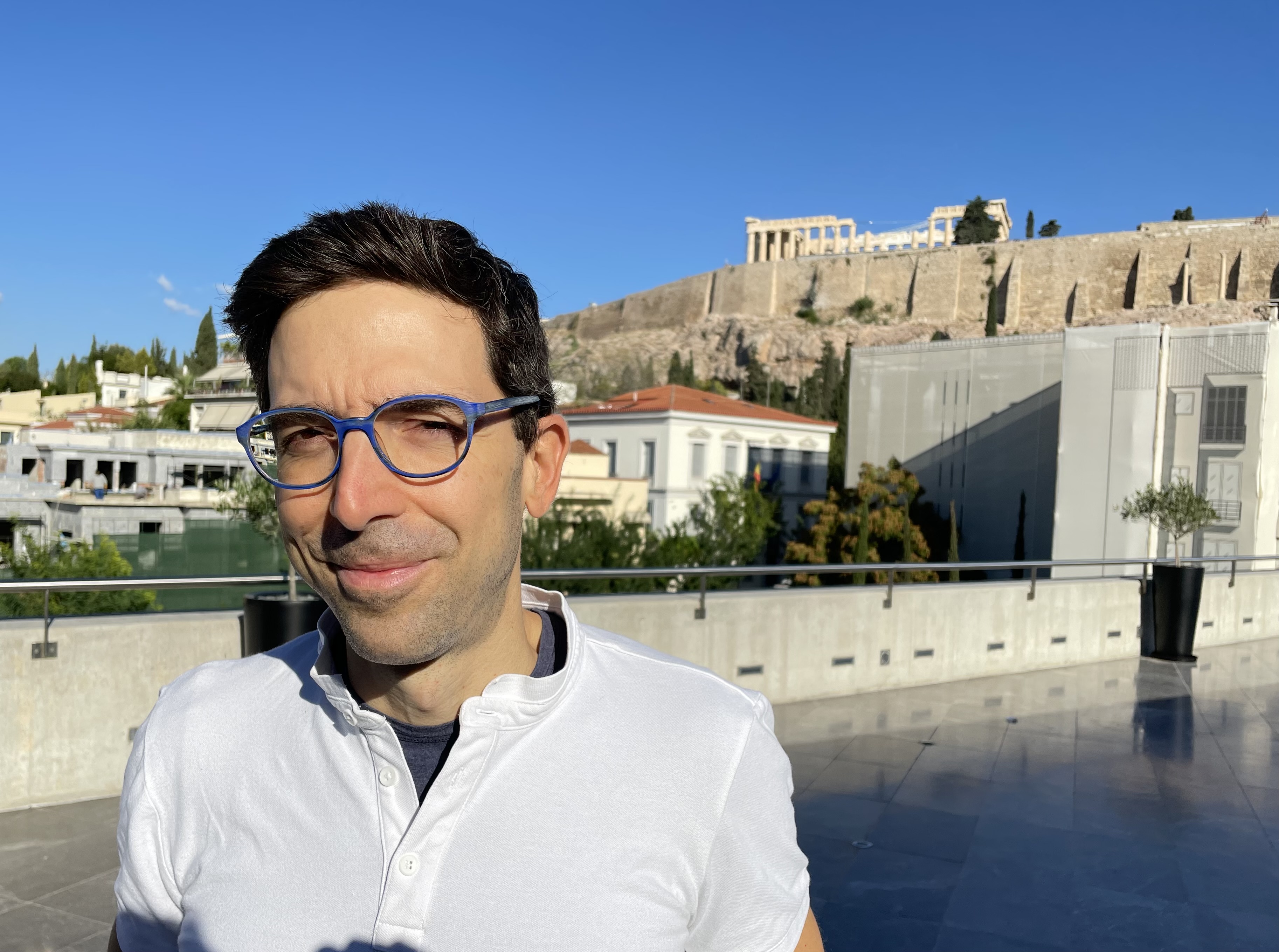 Achilleas Karadimitriou, a fact-checker in Athens who is helping launch the campaign-promise checking site Politikometro and who is also a member of the fact-checking team at Check4facts.gr. (Louis Jacobson/PolitiFact)

A third site is aiming to launch in the next few months, in advance of the June 2023 presidential election: Politikometro.gr, which translates as "political meter." The site aims to apply the campaign promise meters developed by PolitiFact to the Greek government.

Three Athens-based journalists — Achilleas Karadimitriou, Vicky Gerasimou, and Vagelis Georgiou — have been rushing to analyze 443 promises made by the incumbent government as "implemented," "partially implemented," "ongoing," "pending," or "canceled."

"In Greece, it’s very easy to say that the government is making promises but not implementing them, but this complaint has been expressed in a vague way," said Karadimitriou, who is also an adjunct lecturer in communications and media studies at the University of Athens. "Through this project, we hope to clarify this vagueness."

Such efforts provide hope to iMEdD’s Bousdoukou, whose organization aims to create a collaborative community of Greek journalists, focusing on training and the sharing of best practices.

"We have some new and fresh ventures in Greece coming from nonprofit organizations, and this at least makes me, as a citizen and a journalist, hopeful regarding our future," she said.

Email interview with Katerina Lomvardea, editor in chief of Inside Story, Oct. 5, 2022

Interview with George Siakas, research director at the Public Opinion Research Unit of the University of Macedonia, Oct. 4, 2022

Interview with Achilleas Karadimitriou, department of communication and media studies at the National and Kapodistrian University of Athens, Oct. 8, 2022

Interview with Anna-Kynthia Bousdoukou, co-founder and managing director of the Incubator for Media Education and Development, Oct. 7, 2022