A surprising number of Americans believe these false claims about immigrants. Here are the facts

A U.S. Customs and Border Protection vehicle is seen next to migrants after they were detained and taken into custody, March 21, 2021, in Abram-Perezville, Texas. (AP)

As the November midterm elections near, political candidates and TV ads are pushing inaccurate and misleading claims about immigration. And according to an NPR/Ipsos poll, a significant number of Americans believe these falsehoods.

About 1,000 adults in the U.S. were asked whether they believed a variety of claims about immigration, including whether there was an invasion at the southern border and whether most of the fentanyl entering the U.S. was smuggled in by migrants crossing the border illegally. Those assertions are not true.

"The fact that the public believes them is, I think, mainly because that's the information they're being told over and over by political leaders," said Theresa Cardinal Brown, the managing director of Immigration and Cross-Border Policy at the Bipartisan Policy Center.

PolitiFact reviewed the claims believed to be true by survey respondents. Most defy the facts.

The southern border is not open

Some elected officials, conservative media outlets and social media users have repeatedly claimed that the southern border is open. According to the NPR poll, 42% of the Americans surveyed believe it is either completely or somewhat true that "the U.S. is implementing an open border policy along the southern border."

But the border isn’t "open."

"Open border insinuates that there is nobody guarding the border and nobody attempting to stop people from crossing the border, and that is not true," Brown said.

A combination of physical barriers such as fences, surveillance technology such as drones and about 20,000 U.S. Border Patrol agents help limit who and what comes into the United States.

Amid the coronavirus pandemic, immigrants trying to cross the border illegally and encountered by Border Patrol are either immediately returned to their country of origin (or Mexico, their last place of transit) or allowed into the U.S. to file a case under immigration law.

Some people enter the country undetected — that’s happened under multiple administrations, including Biden’s and Trump’s. But that’s not because of "open border" policies; that would negate the work done by Border Patrol agents and the billions of dollars that have been invested over decades to track movements at the southwest border.

There is no invasion at the southern border

But many immigrants crossing the border illegally turn themselves into Border Patrol agents on purpose, to ask for asylum, Brown said.

"That is not behavior that you would really attribute to an invader," Brown said. She said that usually, the term invasion is used to describe a concerted effort by a country to forcibly enter another country to take it over.

This "invasion" narrative has been pushed by local government officials in Texas. Multiple counties have adopted local disaster declarations calling the number of immigrants crossing the border an invasion.

Gov. Greg Abbott, R-Texas, who is running for re-election this year is being encouraged by local Republican officials to declare an invasion in the state. Proponents say this would let the state divert state resources toward expelling migrants.

Arizona’s Republican candidate for governor, Kari Lake, has promised to declare an invasion if elected.

Most fentanyl entering the U.S is not being smuggled by immigrants illegally crossing the border

Overdose deaths, particularly from fentanyl, have been rising in the U.S. since 2013. Mexico is the primary source of illegally sourced fentanyl in the country, per a report from the RAND Corp., a global policy think tank.

About 50% of Americans believe it is somewhat or completely true that "migrants bringing fentanyl and other illegal drugs over the southern border are responsible for the increase in drug overdoses and deaths in the U.S." And 39% believe it is true that "most of the fentanyl entering the U.S. is smuggled in by unauthorized migrants crossing the border illegally."

But the majority of fentanyl and other illegal drugs coming from Mexico are smuggled through official ports of entry in large trucks or cars, according to the Congressional Research Service, which does public policy research and analysis for Congress.

At ports of entry, Customs and Border Protection officials inspect vehicles to determine whether the people, vehicles and what they are carrying are able to legally enter the U.S.

So far in fiscal year 2022, which started in October 2021, border officials have seized more than 10,000 pounds of fentanyl; about 9,000 pounds were seized at ports of entry.

Border Patrol agents have checkpoints within the U.S. at major highways, Brown said.

"Most of Border Patrol seizures of fentanyl are at those places," she said. "Not actually in possession of undocumented immigrants they encountered at the border itself." 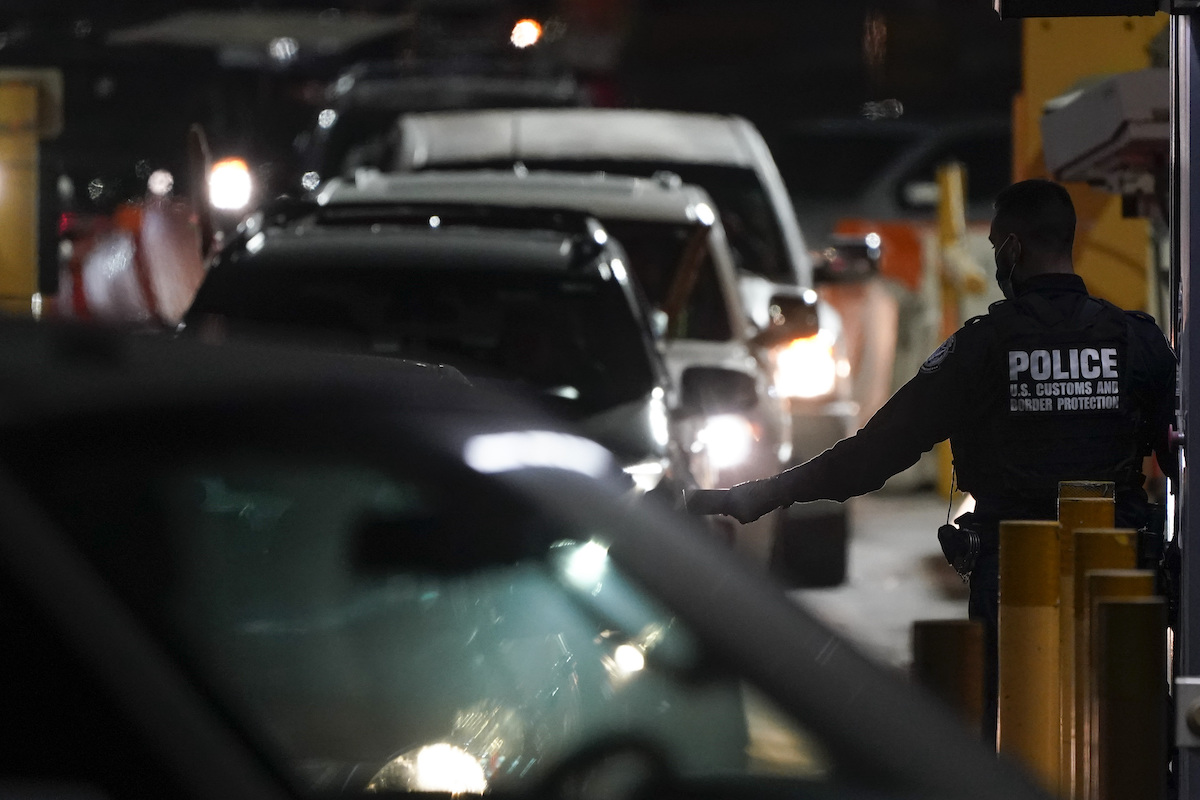 A customs official talks with a driver at the San Ysidro port of entry, Dec. 7, 2021, in San Diego, California. (AP)
Immigrants are not more likely to commit crimes than people born in the U.S.

About a quarter of Americans surveyed incorrectly believe it is "true" that immigrants are more likely to commit crimes or be in prison than people born in the U.S., according to the NPR/Ipsos poll. But studies counter that argument.

The number of criminal-related charges listed as the basis for the deportation of immigrants has also decreased over the past decade. In 2010, U.S. Immigration and Customs Enforcement listed around 57,000 criminal-related grounds for deportation. That number decreased to less than 9,000 in 2021, data from the Transactional Records Access Clearinghouse at Syracuse University shows.

Immigrants in the U.S. illegally are ineligible for most federal benefits

Around 38% of NPR’s survey respondents said it’s "true" that "immigrants are more likely to use public assistance benefits than the U.S.-born population."

But immigrants in the U.S. illegally are ineligible for most federal benefits, including Social Security, the Supplemental Nutrition Assistance Program, or SNAP, and Medicaid for nonemergency situations.

Immigrants might be eligible for certain health care and nutrition programs, if those benefits are deemed necessary to protect life or guarantee safety in dire situations. Some states, such as New York and California, allow immigrants in the U.S. illegally to receive some state-funded benefits.

"In general, most of the public benefits given out in the United States are given to Americans," Brown said.

The government is not secretly flying immigrants around the country

Some Republican elected officials have claimed that the U.S. government is secretly flying immigrants illegally in the country from one state to another. According to NPR, 35% of Americans believe this is either completely or somewhat true.

On some occasions, U.S. Immigration and Customs Enforcement flies adult immigrants from one detention center to another using ICE Air Operations.

Under federal law, unaccompanied children cannot be held by border officials for longer than 72 hours. So Customs and Border Protection transfers the children to the custody of the Department of Health and Human Services. That agency then transports the children to their parents, adult relatives or licensed shelters. This often requires flying the children across the country.

But these flights happen at all times of the day, and Health and Human Services provides limited details on the flights to protect the children’s privacy, The Washington Post reported. ​

NPR, A majority of Americans see an 'invasion' at the southern border, NPR poll finds, Aug. 18, 2022

PolitiFact, What is the ‘great replacement theory’ linked to the Buffalo shooter?, May 16, 2022

CBP, Crossing the border via foot, vehicle, or air without visiting an official port of entry, Sep. 27, 2019

CATO Institute, Immigration and the welfare state: Immigrant and native use rates and benefit levels for means-tested welfare and entitlement programs, May 10, 2018

Bipartisan Policy Institute, Immigrants and public benefits: What does the research say?, November 2018

Chip Roy
stated on January 23, 2023 a tweet:
"Under Biden, we have seen over 4.6 million encounters at our southern border. Most have been released into the interior and will stay here indefinitely."

Gavin Newsom
stated on January 23, 2023 a tweet:
“The USA has a gun homicide rate 26 times higher than our peers.”

Sean Hannity
stated on January 10, 2023 a TV segment:
“The White House is now attempting to ban all gas ovens and burners.”

Joe Biden
stated on January 5, 2023 a speech:
Since a new immigration program was implemented, the number of Venezuelans trying to enter the U.S. illegally decreased “from about 1,100 per day to less than 250 per day on average.”

Mike Pence
stated on November 18, 2022 a speech:
The border wall and the ‘Remain in Mexico’ policy “reduced illegal immigration by 90%.”

Jeh Johnson
stated on November 27, 2022 an interview:
“Only about 20%” of people who apply for asylum qualify for it.

Donald Trump
stated on November 10, 2022 a Truth Social post:
Election results in Clark County, Nevada, and Arizona are not yet known because those places “want more time to cheat.”

Catherine Cortez Masto
stated on October 13, 2022 a tweet:
Adam Laxalt is “anti-DACA” and “fought against the protections for DACA recipients when he was attorney general.”

Citizens for Sanity
stated on October 5, 2022 an ad:
Suggests that an immigrant charged with sexually assaulting a child entered the U.S. illegally during the Biden administration.