Rick Perry
stated on August 21, 2013 in a radio ad:
"Every year, more than $40 million are leaving Missouri for the Lone Star State."

Do dollars slip from state to state?

Texas Gov. Rick Perry suggested as much in a radio ad aired in Missouri as he framed his case for businesses there to slip away to Texas.

To our inquiry, Perry spokesman Josh Havens said the $40 million traces to an online application created by Travis H. Brown, CEO of a St. Louis public affairs and advocacy firm and author of the 2013 book,"How Money Walks." Havens said clicking on Missouri on the app shows that between 1992 and 2010, more than $791 million "was lost to the state of Texas. That equates to more than $40 million each year."

At a glance, then, Perry's math seems to work. But is it accurate to say all those dollars annually leave Missouri for Texas?

We failed to connect with Brown, but an analyst with the Washington, D.C.-based Tax Foundation, which researches state and federal tax policy, told us the IRS annually makes available its data tallying changes in adjusted gross income across the country and state to state--also taking into account how many taxpayers have moved from one state to another since the previous year’s filings.

For instance, the foundation’s Nick Kasprak said by phone, if a taxpayer in Missouri had adjusted gross income of $30,000 one year and then the next year filed a return from Texas showing $65,000 in such income, the IRS would record that as $30,000 moving to Texas--basing that on the adjusted gross income reported in Missouri in the first tax year.

A foundation web page breaks down such IRS data for 1993 through 2010, the latest year of available data. Adjusted for inflation, according to the foundation, Texas netted $862 million in adjusted gross income from Missouri over the 17 years, or nearly $51 million a year on average. By email, Kasprak told us the net difference in raw dollars over the 17 years was $710 million, or an annual average of $42 million. 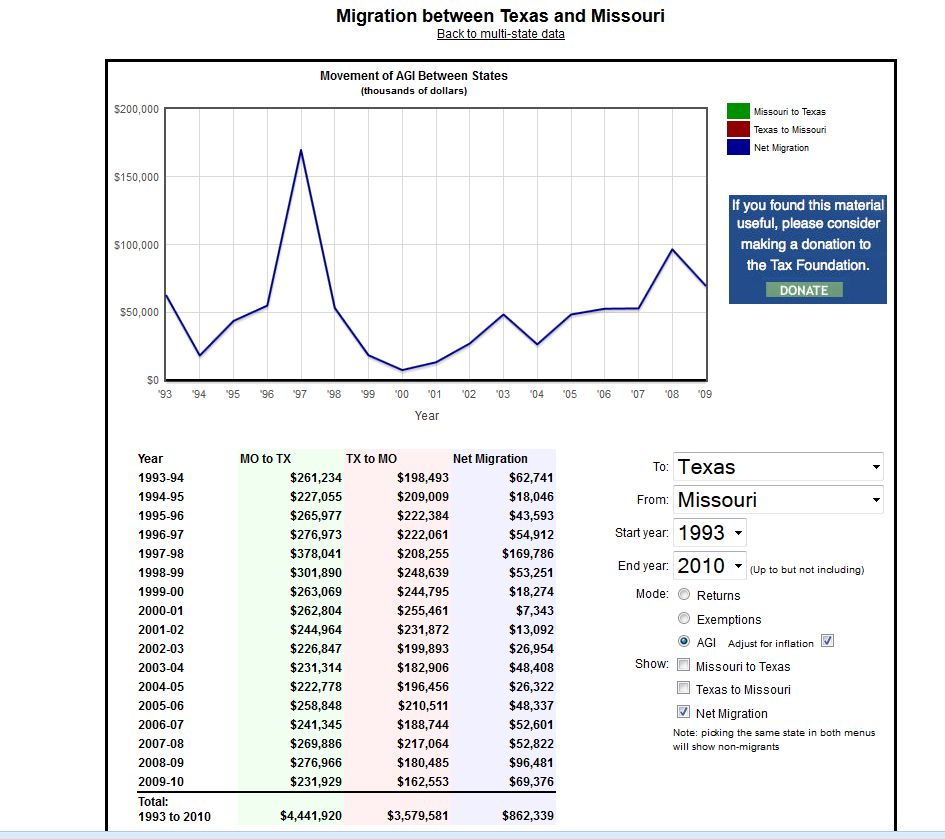 Per Perry’s statement, Kasprak said it would be helpful to clarify that the cited adjusted gross income figures refer to how much money was made by residents of Texas in their previous year living in Missouri. That is not the same, he said, as saying that those exact earnings moved to Texas.

Another expert, Art Hall, director of the Center for Applied Economics at the University of Kansas, agreed by phone that Perry’s statement reflects only what individuals earned in the state they departed, either Missouri or Texas. "We don’t know if they got a wage increase or wage cut when they moved to Texas or vice versa," Hall said. Regardless, Hall said he considers Perry’s statement in line with the IRS data as adjusted for inflation by the foundation.

Perry said: "Every year, more than $40 million are leaving Missouri for the Lone Star State."

Still, adjusted for inflation, the annual difference averages about $50 million--more than Perry’s unadjusted figure. Then again, this did not hold for every year. In six years--most recently 2005--there was less than a $40 million difference.

On balance, we rate this claim as Half True.