Texas needs more charter schools, according to state Sen. Dan Patrick, because there are "100,000 families who are on the wait list."

Actually, the Houston Republican gave the statistic a couple ways as he introduced legislation on that point Feb. 18, 2013, in a hearing of the Senate Education Committee, which he chairs. He first cited "100,000 families," then a few minutes later said, "155,000 students … are enrolled in charters; approximately, as I said, 101,000 are on the wait list." His Feb. 18, 2013, press release about the bill said nearly 100,000 parents were on charter school waiting lists.

But 100,000 sounds like a lot of anybodies -- as Patrick indicated, that’s about two-thirds of charters’ actual enrollment. According to the state Sunset Commission, those 155,000 charter enrollees equal about 3 percent of Texas public school students.

Are the lists that long?

We didn’t field a response from Patrick spokesman Logan Spence, and Texas Education Agency spokeswoman DeEtta Culbertson told us the state did not keep such numbers on charter schools, which receive public dollars but are privately managed and exempt from some education laws so they can try different approaches.

Culbertson referred us to the Texas Charter Schools Association, whose spokeswoman Tracy Young emailed us waiting-list counts and some background on Texas charter schools in general.

Young said that in August 2012, the association asked its members to report their waiting-list numbers, which totaled more than 101,000 students. Of about 175 charter licensees operating in Texas at the time, she said, 137 were members of the association; 67 of those responded to the survey.

15 largest waiting lists among TCSA members who responded to 2012 survey: 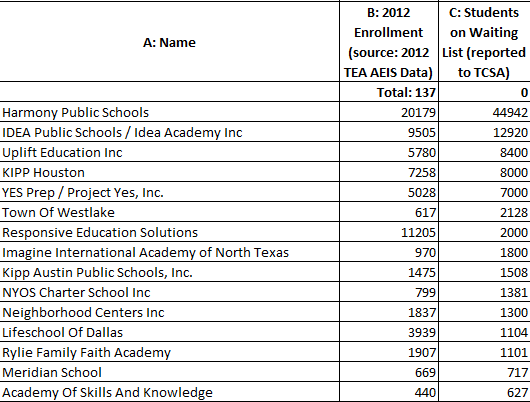 
Operators were asked to remove duplications among their own campuses, Young said. For example, if a child were on wait lists for six campuses run by a single operator, that operator would count the child only once in its total. Young said her group confirmed that at least the operators with the largest lists had filtered out such duplicative entries.

But they did not, she said, have a way to "de-duplicate" children who might appear on more than one operator’s list. Under the federal Family Educational Rights and Privacy Act, the association could not collect students’ names and addresses, Young said, and school operators did not have a system to compare such individual data with each other.

Still, she said, "We feel certain that it represents a good number of the students on waiting lists across the state."

The association, which formed in 2008, last year sued the state to get public dollars for charter facilities and to allow more than 215 charter licenses in Texas. Charter school operators in 2012, according to an association fact sheet, ran 506 campuses educating 154,278 students.

Texas charter schools overall have grown steadily since their inception in 1995, as shown by two charts from an August 2012 study commissioned by the Texas Business and Education Coalition, which used education agency data: 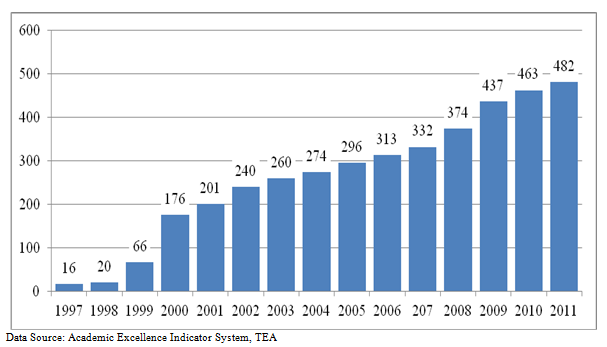 Looking for other wait-list estimates, we found no current numbers. But we did spot two older reports from the conservative Texas Public Policy Foundation that suggested waiting lists had grown along with enrollment in prior years.

Footnotes said that students could appear on more than one list, but also noted, "Some charter schools do not keep a waiting list even though demand exceeds supply."

A chart in the 2009 report broke down the wait-lists by region: 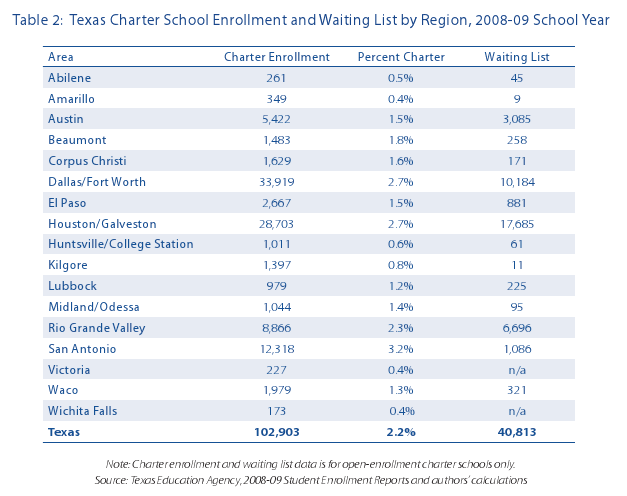 Patrick said, variously, that 100,000 students, families or parents are waiting to get into Texas charter schools. The schools’ association says that’s a little lower than their estimate for students, and it’s plausible that families or parents could be trying to enroll more than one child apiece.

Then again, the association’s 101,851 wait-list head count could contain duplications, if students were trying to get into schools run by more than one charter operator.

"An Analysis of Gaps in Funding for Charter Schools and Traditional Districts," Institute for Public School Initiatives at the University of Texas, March 2009

"The Effect of Charter Schools on Traditional Public SchoolStudents in Texas: Are Children Who Stay Behind Left Behind?," National Center for the Study of Privatization in Education, Columbia University, September 2005