Todd Staples
stated on January 13, 2014 in a campaign email blast:
"Savings that I achieved" helped fund cameras on the border. "As a result, more than 21,500 arrests have been made and 46 tons of narcotics confiscated."

Lieutenant governor candidate Todd Staples says he not only has a plan that addresses border security, he’s already tackled the challenge.

"As a result, more than 21,500 arrests have been made and 46 tons of narcotics confiscated."

The Texas Department of Agriculture indeed approved aid for Operation Drawbridge, we learned, but the multimillion-dollar Department of Public Safety project had already been in place for most of a year. Also, Staples’ cited arrest and confiscation totals reflected Drawbridge’s overall results.

In an interview, Staples told us his statement was intended to reflect totals for the entire program and he’s never said all the results were due to Agriculture Department aid. Staples also stressed that his email blast said the agency’s savings "helped" achieve the results. "I don’t want to get popped for something I’ve never taken credit for," he said.

The state’s Department of Public Safety started Drawbridge in January 2012, according to its website. DPS spokesman Tom Vinger told us by email that Agriculture Department grants in October 2012 and August 2013 provided $345,000 to the program.

The main source of Drawbridge funding, Vinger said, is the Criminal Justice Division of the Governor’s Office, which has so far provided grants totaling $2.5 million.

A description of the initiative from a June 9, 2012, San Antonio Express-News news story said, "(T)he department is installing 500 cameras along the border, part of an electronic monitoring program called Operation Drawbridge. It's an update of the much-criticized Texas Border Watch Program, a multimillion-dollar effort by the state to set up video cameras along the border. It was recently canceled after only a few dozen cameras were put in place over more than three years and unimpressive results."

A 2013 DPS conference presentation placed online illustrates how Drawbridge uses modified off-the-shelf, motion-sensing, low-light cameras of the type hunters use to spot and track game at all hours. Farmers and ranchers volunteer to have the $300 cameras placed on their land near the Texas/Mexico border. Once an image is captured, software transmits it to law enforcement, and response times can be as quick as 10 minutes, according to the presentation.

Staples has long warned that because of a lack of border security, farmers and ranchers are under siege. His campaign spokesman, Bryan Black, told us via email that Staples helped bring landowner organizations into Operation Drawbridge.

Staples told us his involvement with border security issues arose in response to landowners asking him for help.

Black said the grants came from agency savings in fiscal year 2013. Agriculture Department spokeswoman Lindsey Pope emailed us a chart with the agency’s "lapsed appropriations," money budgeted by lawmakers but ultimately unspent, in each biennium from 2006-07 through 2012-13. It showed the total returned to the state treasury in 2012-13 was $10.3 million.

The 2012 release said, "Operation Drawbridge is fully operational today with hundreds of cameras located along the border. This funding will essentially double the number of cameras involved in the program."

Drawbridge was operating 750 cameras as of June 30, 2013, according to the online DPS presentation.

Legislative Budget Board staff spokesman John Barton emailed us a Sept. 28, 2012, grant agreement between the agencies stating that the $225,000 grant was "for the funding of additional DPS remote motion-sensing cameras, installation and monitoring activities associated with the surveillance along the border, particularly in those areas of the Texas-Mexico border where illegal activity and border violence have adversely affected rural landowners and the Texas agriculture industry."

From January 2012 through December 2013, according to Vinger and the DPS website, Drawbridge "resulted in the apprehension of more than 22,950 individuals and more than 50 tons of narcotics."

The October 2012 press release announcing the first Department of Agriculture grant said Drawbridge had "resulted in the apprehension of approximately 4,000 individuals and 10 tons of narcotics since January 2012."

Some supporting detail comes from the 2013 DPS conference presentation: 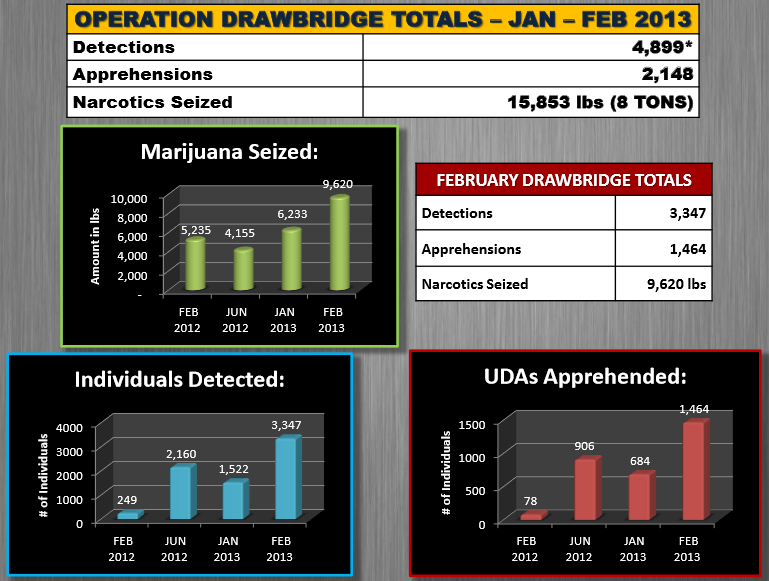 Staples said savings he achieved helped fund cameras on the border and that as a result, more than 21,500 arrests were made and 46 tons of narcotics were confiscated.

This statement could leave the misleading impression that a few hundred thousand dollars committed on Staples’ watch to an established program near the border culminated in the touted arrests and confiscations.

It’s documented that the grant money supported the border effort. But we don’t see a way to tie particular arrests and confiscations to the grants. Also, this statement leaves out the critical fact that about 90 percent of the operation’s funding has come from federal aid awarded through the governor’s office.

We rate this claim as Half True.