Rick Perry
stated on July 17, 2014 in an interview with Glenn Beck:
More than 3,000 homicides were committed by "illegal aliens" over the past six years.

Texas Gov. Rick Perry expressed concern about border-crossing immigrants committing crimes, going on to tell Glenn Beck in a July 17, 2014, interview "the number of illegal activities up to and including homicides--I think over 3,000 homicides by illegal aliens over the course of the last six years; that’s unacceptable and that’s the reason that we have to secure that border."

That sounded like a lot of killings by unauthorized residents. (Where were those headlines?)

We decided to put Perry's number to the Texas Truth-O-Meter, starting with Perry spokeswoman Lucy Nashed, who told us to consult the Texas Department of Public Safety.

DPS Director Steve McCraw referred to that many homicides in his July 3, 2014, testimony to the U.S. House Committee on Homeland Security. After saying the "consequences of an unsecured border with Mexico" undermine public safety, McCraw said: "Another consequence seldom discussed is the high number of criminal aliens arrested for non-immigration crimes throughout Texas." He then mentioned "over 3,000 homicides" since 2008.

Asked for elaboration, a DPS spokesman, Tom Vinger, pointed to an agency web page, "Texas Criminal Alien Arrest Data," stating that since January 2012, a monthly average of 5,899 "foreign nationals" -- individuals legally authorized to live in the U.S. or not -- have been arrested in Texas, with 40 percent having been arrested before on a criminal charge.

Also on the page: "From October 2008 through July 1, 2014, Texas has identified a total of 203,685 unique criminal alien defendants booked into Texas county jails. Over their criminal careers, these defendants are responsible for at least 642,564 individual criminal charges mostly consisting of Class B misdemeanors or higher, including 3,070 homicides and 7,964 sexual assaults," the agency says.

The web page includes a pie chart tallying the criminal charges accumulated by the defendants: 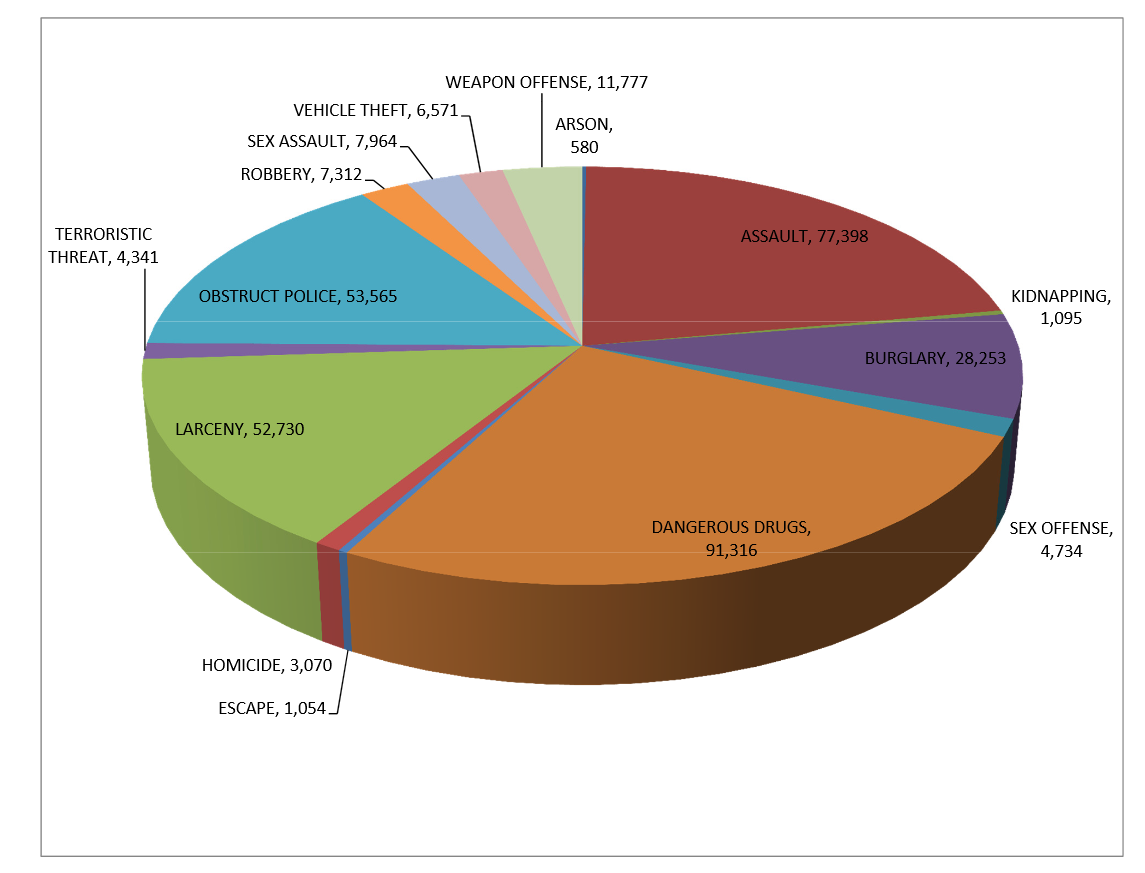 The last line on the page says "these are minimum figures as these numbers include only those aliens whose fingerprints were already in the federal system when they were booked and it does not necessarily include all those who are incarcerated in federal prison."

We asked Vinger for more detail about the homicide charges. We especially wondered how many charges had been leveled since the  flow of children crossing the border started to escalate in 2011.

Vinger replied by email, "We don’t have any additional information."

Next, we explored whether Perry accurately cited the DPS information.

To rehash, the governor told Beck more than 3,000 homicides had been committed by "illegal aliens" since 2008. However, the DPS web page doesn’t say that; it doesn’t even specify when (or where) the 3,070 homicide charges in the criminal histories of all the "alien" individuals arrested in Texas since October 2008 accumulated.

Via the John Jay College of Criminal Justice in New York, we reached criminologists who looked over the DPS presentation.

Michael Walker, an adjunct John Jay professor and an expert in how the FBI gathers crime statistics, said the DPS information doesn’t demonstrate the 3,000-plus homicides were committed by any residents since 2008. Rather, Walker said by phone, the presentation telescoped the arrest histories of the 203,685 individuals put in county jails in the 69 months that were reviewed. "Where did they offend--Texas? Oklahoma? Mississippi?" Walker said, his point being such information isn’t on the web page.

Walker and Ramiro Martinez, Jr., a Northeastern University professor, each suggested it’s highly unlikely unauthorized residents committed that many homicides in the years mentioned by Perry.

Drawing on FBI Uniform Crime Statistics for Texas posted online by the DPS, Walker calculated that from 2008 through 2012, there were 3,903 persons arrested on homicide charges in the state. Walker said it’s not logical that residents in the state without legal permission accounted for most of the same deaths. He conceded, too, he wasn’t able to roll in homicide charges from 2013 and 2014; he didn’t see that data online nor were we successful in eliciting figures from DPS.

Martinez offered up his own analysis, which started by averaging the FBI’s tally of a little more than 1,100 homicides in Texas in 2011 and 2012 and extrapolating that over six years to reach an estimated total of nearly 6,700 homicides over most of the period analyzed by DPS. By email, Martinez said Perry’s statement to Beck potentially would suggest 3,070, or 46 percent, of the estimated homicides were committed by "illegal aliens." But, he said, "that makes no sense." He said in a follow-up email: "It just boggles the imagination that level of ‘aliens’ were involved to that extent over time and nobody noticed."

The criminologists noted another weakness; the DPS presentation mixes together recent homicide charges with those that might have been leveled decades ago. Also, they noted, the agency tallied arrests only, not homicide convictions.

Martinez also raised an eyebrow at the mingling of criminal charges against legally authorized U.S. residents and individuals in the country without permission, risking conclusions irrelevant to border security today. By the state's approach, he said, it’s possible a homicide charge in the tally involves someone who reached the U.S. from Cuba in 1962 who was later charged with and/or committed a homicide. If so, he said, that charge would bear no relevance to criminal actions by people lately crossing the Rio Grande.

Neither the DPS or Perry’s office offered more information.

Perry told Beck over 3,000 homicides were committed "by illegal aliens over the" last six years.

This claim is unsupported by the presentation he relied on, which indicates that since 2008 in Texas, more than 200,000 arrested immigrants -- foreign nationals living here with or without legal permission -- had among them accumulated 3,070 homicide charges (not convictions) in their lives. Put another way, for this declaration to hold water, one would have to assume illegal immigrants committed nearly half of the state’s homicides since 2008; we found no such data.

This statement is both incorrect and ridiculous. Pants on Fire!