Pete Gallego
stated on May 14, 2014 in an email blast:
"The average student loan debt in Texas is over $22,000...the cost of an average size pickup truck." But unlike car owners, "students are not allowed to refinance their loans at lower rates."

"But here’s what’s truly alarming: students are NOT allowed to refinance their loans at lower rates -- the same way car owners can," Gallego wrote.

Democratic-sponsored legislation would provide federal aid so students and graduates stuck with high interest rates could repay the loans at the lower rates Congress approved for new student loans in 2013, though a May 16, 2014 National Journal news story called the proposal a long shot in the Senate, where Republicans were described as likely to resist higher taxes on the wealthy to pay for the refinancing wrinkle.

Gallegos revved our curiosity thrice over.

By email, Gallego’s campaign manager, Anthony Gutierrez told us the congressman’s average student-loan debt figure came from a news story posted online May 8, 2014, on the GovBeat blog of The Washington Post. That story said more than a million Americans would graduate this year with substantial student loan debt, a conclusion it attributed to the National Conference of State Legislatures.

"The graduates will have an average of $26,500 in student loans," the Post story said, "joining the tens of millions of other adults who collectively hold more than $1 trillion in student loan debt. That burden is largest, on average, in many Northeastern and Mid-Atlantic states, a few Southeastern states and California." 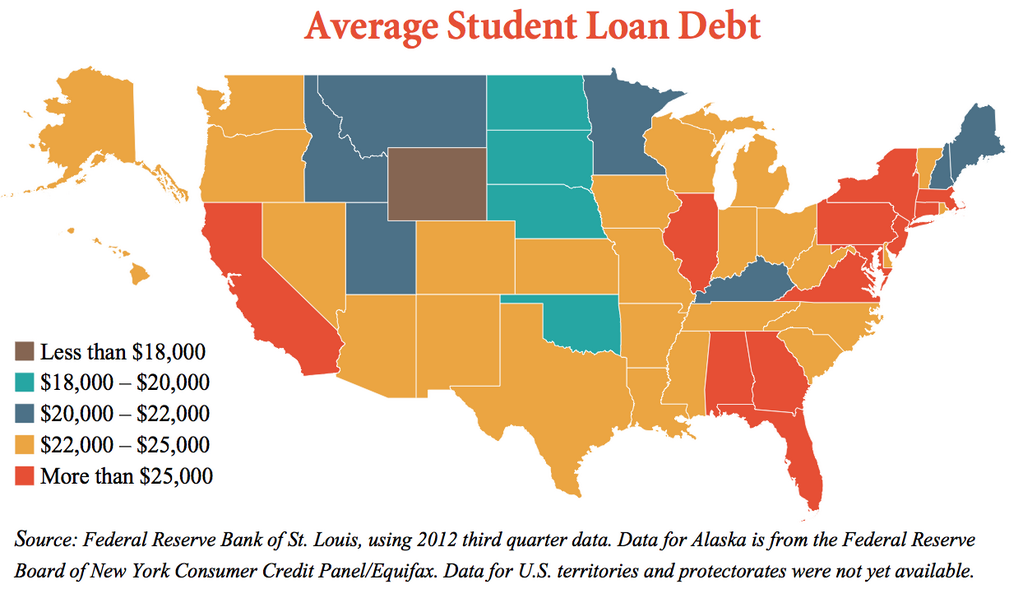 Next, did Gallego capture the price of an average-size pickup?

Gutierrez told us the campaign researched average used truck prices on the Cars Direct website. He pointed us to an April 5, 2012, article on the site showing suggested retail prices for five 2010 and 2007 models. "These prices are for a base model pickup truck with standard options and no additional accessories," the article said.

Finally, are students really not allowed to refinance college loans?

Gutierrez pointed out news articles including a Feb. 20, 2013, Time magazine piece stating that unlike other consumers who have taken advantage of reduced interest rates to refinance purchases, student borrowers have been restricted because Congress—not the free market—"sets the interest rate on the vast majority of student debt, and because these loans are not secured by collateral private lenders are loath to undercut the federal government’s terms."

The Time story noted that student loan debt was at $1 trillion—and of that, the federal government backed $864 billion. Also, most of the debt was being carried at an interest rate higher than 6 percent, a figure Time attributed to a Feb. 13, 2013, report from the left-leaning Center for American Progress. "That’s almost twice the rate of an average 30-year mortgage," Time said.

By telephone, Heather Jarvis, a North Carolina attorney specializing in student loan law, said that some graduates may be able to refinance student loans at lower rates through private lenders, though she said this would only happen in cases of substantial income. (Car owners, in contrast, have four-wheeled collateral.)

By email, Jarvis said "refinancing federal loans with a private loan is risky.  The borrower gives up important protections that accompany federal loans (like flexible repayment and discharge provisions)."

Also by phone, Brian Stewart of the Center for American Progress -- which has urged the Democratic-backed action -- said it’s possible but difficult to refinance student loans with private lenders while there's no way for students to get the federal government to refinance a government-backed loan. Stewart, a spokesman for Generation Progress, a center project focused on young adults, said the center has been researching student-loan issues for about two years.

Gallego said the "average student loan debt in Texas is over $22,000...the cost of an average size pickup truck." But unlike car owners, he said, "students are not allowed to refinance their loans at lower rates."

This claim reflects the latest estimate of average student-loan debt and a findable price for an average-size pickup. It’s also so that most college loans are federally backed and Uncle Sam doesn’t offer a way for students and graduates to refinance. On the other hand, students taking loans from banks or other private lenders aren’t prevented from refinancing; this claim lacks that clarification.

We rate this statement as Mostly True.