A reader sent us this social media meme. Is it correct?

In the social media wars over gun control, a new social-media meme makes the case that gun violence is wildly exaggerated by the media.

"Gun homicide is down 49 percent in the past 12 years. Only 12 percent of Americans know that. Tell us again how unbiased our media is," the Facebook post said.

A reader sent us the posting and asked us to fact-check it. We’ll focus our attention on the claim about gun homicides, but we’ll also touch on the media question later on.

We began by looking at year-by-year statistics on gun homicides compiled by the Centers for Disease Control and Prevention. Since the meme’s language was clear about focusing on "homicides," we didn’t include statistics for suicides, gun shootings with undetermined causes, or "legal interventions," such as justified shootings by police. The most recent data is for 2010, so we went as far back as 1998 to define the 12-year period.

This table summarizes what we found:

However, we also found that the statistic did come from somewhere.

Here’s the rundown of those earlier years:

It’s possible to chalk this mistake up to a simple typo -- after all, if the claim had said 17 years rather than 12, it would have been correct. However, the time frame raises important issues.

For one thing, the CDC data show that the big decline in gun homicides came between 1993 and 2000, which happens to coincide with the years Bill Clinton was president. While Clinton and his policies are hardly the only reason for this decline, his signing of tighter gun-control legislation makes him unpopular among the kinds of gun supporters who might have created this meme. By contrast, by framing the decline as happening over the past 12 years, the meme implies that George W. Bush -- a president much more friendly to gun-rights supporters -- can take some credit for the decline. 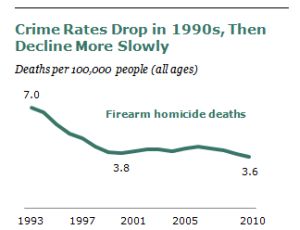 More importantly, by making this mistake, the meme misunderstands the overall trend lines of gun homicides. Gun homicides didn’t decline 49 percent over the last 12 years -- rather, they declined precipitously over six years in the 1990s, then have remained basically stagnant for the past decade or so.

Why is this important? Because the decline, to a large degree, has to do with a specific reason -- the end of the crack epidemic.

The decline in gun homicides in the 1990s "was largely a reversal of an upward trend that occurred in the mid-to-late 1980s," said James Alan Fox, a criminologist at Northeastern University. "There would not have been much of a downturn were it not for the surge. This up-and-down change was primarily in cities and among offenders under age 25, and indeed have much to do with crack markets and gang activity."

In fact, the Pew study made the same point, noting that "by the early 1990s, crack markets withered in part because of lessened demand, and the vibrant national economy made it easier for even low-skilled young people to find jobs rather than get involved in crime. At the same time, a rising number of people ages 30 and older were incarcerated, due in part to stricter laws, which helped restrain violence among this age group."

The meme also takes a shot at the media for burying this large decline. But that’s not deserved. Just the first two pages of Google search results show articles about the Pew study appearing in the following outlets:

As for the claim that "only 12 percent of Americans know that," the meme got the percentage right, though of course it got the substance of what that 12 percent knew wrong. "Despite national attention to the issue of firearm violence, most Americans are unaware that gun crime is lower today than it was two decades ago," the report said. "According to a new Pew Research Center survey, today 56 percent of Americans believe gun crime is higher than 20 years ago and only 12 percent think it is lower."

The social media meme said that "gun homicide is down 49 percent in the past 12 years." The gun homicide rate is actually down by 49 percent over the past 17 years, but this seemingly minor mistake betrays a significant misunderstanding of how rates have fluctuated over the past two decades. During the past dozen years, gun homicide rates have been largely static; their big decline mostly came in the years before the meme even started counting. The meme is not just incorrect; it’s a distraction from what actually happened. We rate the claim False.