The Republican senator from Texas hammered that theme in a May 6, 2014, report, the fourth in a series, listing dozens of his concerns covering some previously fact-checked terrain such as work waivers for individuals on Temporary Aid to Needy Families, a topic reviewed by PolitiFact in 2012, plus administration moves softening or putting off parts of the Democrat-propelled 2010 health care law.

Cruz set us to digging by declaring the administration "spent $205,075 in ‘stimulus’ funds to relocate a shrub that sells for $16." 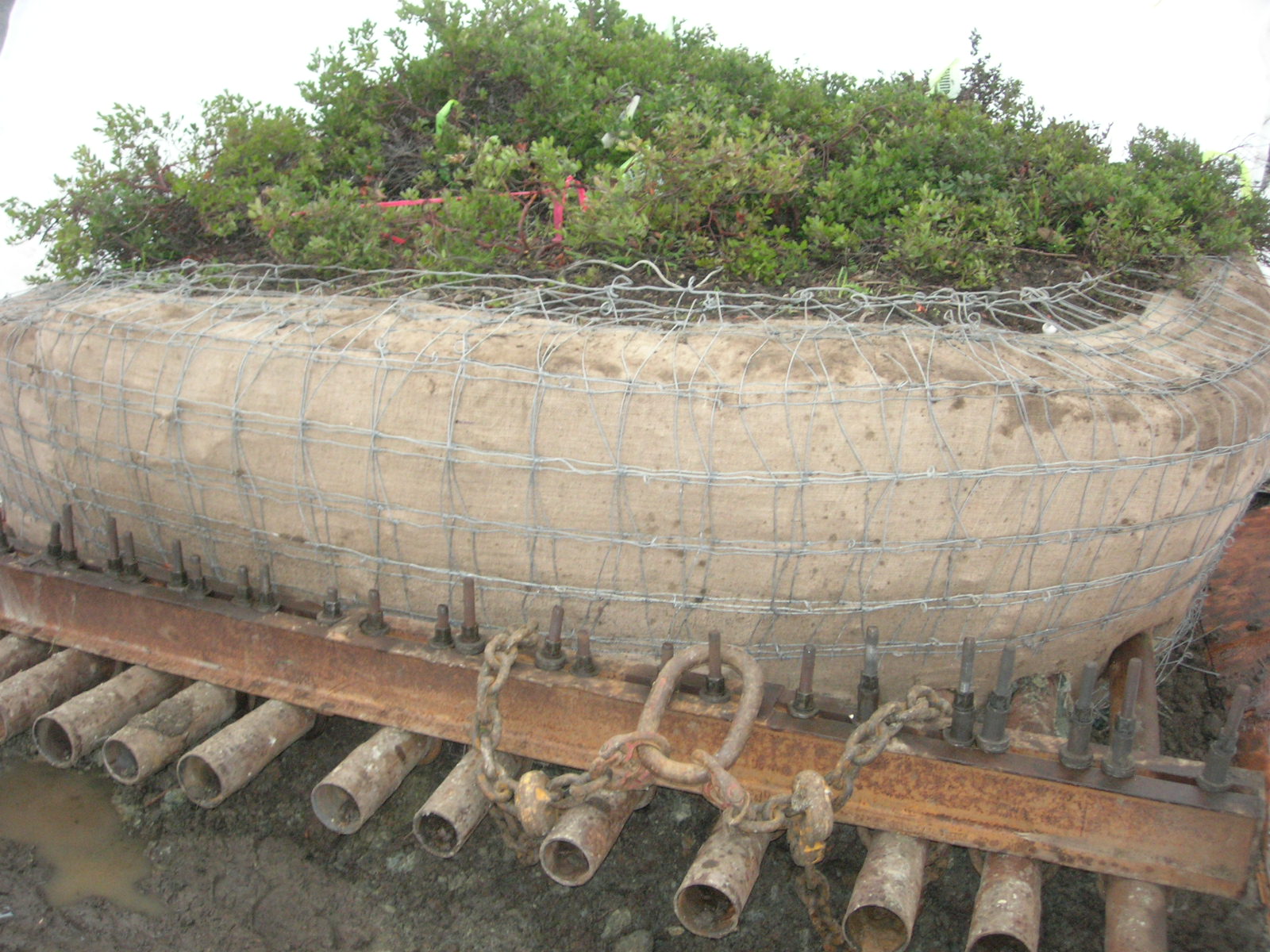 This shrub, shown here after it was uprooted from its original site, prompted Ted Cruz’s claim (photo by California Department of Transportation, received by email May 22, 2014).

The basis for this claim, footnoted in the report, was an April 12, 2012, news article posted online by the CNSNews.com, Cruz spokeswoman Catherine Frazier said by email. The Virginia-based service says its goal is to "provide an alternative news source that would cover stories that are subject to the bias of omission and report on other news subject to bias by commission."

According to the story, "Shovel Ready in San Fran: $205,075 to ‘Translocate’ One Shrub from Path of Stimulus Project," various agencies in 2010 transplanted a type of bush spotted in San Francisco that until then had been believed extinct in the wild for more than 60 years; the shrub was moved from a highway median where it blocked a stimulus-supported highway renovation to an undisclosed local location where it could continue to bloom in the wild. Meantime, the story said, commercial versions of the Franciscan manzanita, or Arctostaphylos franciscana, could be purchased locally for $15.98 or $18 each.

An article about the uncovered plant, on the web page for a Los Angeles botanical garden, says Franciscan manzanitas typically grow about 12 inches tall and spread by rooting branches to form masses from 4 to 6 feet (or more) wide. According to the description, white- to pink-blushed urn-shaped flowers are produced in small terminal clusters.

CNSNews.com quoted a spokeswoman for the Presidio Parkway project, Molly Graham, as saying that digging up the uncovered plant, putting it on a truck and driving and planting it elsewhere cost $100,000.

The story noted other plant-related costs in a Dec. 21, 2009, 15-year memorandum of agreement involving various agencies teamed up to save and propagate the plant found near the south entrance to the Golden Gate Bridge. In the agreement, the California Department of Transportation, or CalTrans, agreed to transfer $79,470 to "fund the establishment, nurturing, and monitoring of the Mother Plant in its new location for a period not to exceed ten (10) years following relocation and two (2) years for salvaged rooted layers and cuttings…"  Receiving the money: the federal Presidio Trust, which describes itself as devoted to transforming the Presidio section of San Francisco to a new purpose.

CalTrans also agreed to transfer $25,605 to the trust to cover reporting requirements of the initial 10-year period. Adding these figures to the $100,000 to uproot, move and re-plant the shrub leads to total translocation costs of $205,075, CNSNews.com said, not counting up to $23,500 in other post-move shrub-connected costs it identified from the memo.

And how did the Obama administration figure in?

CNSNews.com reported that grants funded by the economic stimulus package, approved by the Democratic-majority Congress and signed into law by Obama in 2009, are helping to fund the ongoing replacement of an approach to the Golden Gate bridge, which has a total expected cost of $1.045 billion. Some $130 million in stimulus grants, the story said, breaks down to $83.28 million awarded Dec. 24, 2009 (about a month before the bush move) and $46 million awarded Dec. 30, 2010.

Like the CNSNews.com article, the Chronicle story was silent on whether stimulus aid paid for the shrub move.

Separately, botanists declared a difference between the plant found in the wild and others like it.

In an April 20, 2012, blog post, the Berkeley, Calif.-based Bay Nature Institute, which says it’s dedicated to educating residents about the beauty of the surrounding natural world, quoted Dan Gluesenkamp, the botanist who originally noticed the lone plant as he drove by the median, as saying it’s misleading to equate the wild Franciscan manzanita with the domesticated version found in garden stores, which has been hybridized for features like pretty flowers, Gluesenkamp said. "You can go buy a dog for $15 or $230," he said, "but it’s not the same as a wolf in the wild."

The blog post continued: "The Franciscan manzanita found in garden stores is an offshoot of a wild specimen taken in 1947 from a Laurel Hill cemetery, one of the few remaining wild locations at the time. As the story goes, some of the last remaining wild specimens were salvaged by James Roof, the founding director of the Regional Parks Botanic Garden in Berkeley. In a clandestine nighttime rescue, plantswoman Lester Rowntree ‘garnered it ghoulishly in a gunnysack’ and gave it a new home in her garden. A few more plants found their way into nurseries and botanic gardens, but the species’ known wild habitat was no more," the institute said.

In September 2012, the U.S. Fish and Wildlife Service designated the surviving wild manzanita as an endangered species, according to a Sept. 4, 2012, Chronicle news article.

Asked how the shrub's move was funded, a CalTrans official, David Yam, replied by email that $148,000 spent to uproot the 21,000-pound plant and move, replant and initially preserve it came from tolls collected on bridges near San Francisco by the Bay Area Toll Authority--not stimulus aid. Yam said major post-move costs, in accord with the memorandum of agreement, are drawing on $105,000 in federal funds, though (again) no stimulus money, he said.

Shopping for a Franciscan manzanita

We briefly shopped online for a manzanita Franciscana without finding one. By telephone, Bart O’Brien, a manager at the Regional Parks Botanic Garden in Berkeley, Calif., said that occasionally the garden sells plants, descended from the manzanita Franciscana salvaged from the San Francisco cemetery in the 1940s. When sales happen, he said, the plants sell for $10 to $25. The sold plants are of the same species as the bush saved during the ongoing highway project, O'Brien said, but they’re not the same because they're not growing in the wild.

Updated on our findings, Frazier said by email the bush never would have been shifted if not for the stimulus-supported road project. Moving the plant wasted tax dollars, she said, and Cruz stands by his claim.

Some $130 million in stimulus money is supporting a $1 billion California road project that when it started brought to light a thought-to-be-extinct shrub in the wild.

But we learned local road toll revenues covered the shrub’s $148,000 move and transplantation--not stimulus aid. Also, there’s a distinction between the rare in-the-wild version the shrub ballyhooed in the city by the bay and the occasionally available commercial versions, which this claim fails to acknowledge.

We rate the statement, which has an element of truth but ignores critical facts such as the singularity of the shrub whose move wasn't funded from stimulus aid, as Mostly False.