Jim Skaggs
stated on November 5, 2014 in as quoted in a news story:
Austin is "burdened by the fastest-growing tax increases of any major city in the nation."

An activist expressed elation after Austin voters rejected a $1 billion rail-and-roads proposition, going on to say the rail part of the plan would have been a financial headache.

Jim Skaggs, founder of Citizens Against Rail Taxes, told the Austin Monitor for a Nov. 5, 2014, news story, that the rail costs would have been imposed "on a community already burdened by the fastest-growing tax increases of any major city in the nation."

Mark Nathan, a consultant to Let’s Go Austin, which advocated for the proposition, asked us to check Skaggs’ claim.

To our inquiry, Skaggs said by email he believes he learned of Austin’s dubious status from an Austin Business Journal story. "I do not have time to research it at the moment," Skaggs wrote Nov. 5, 2014.

We hunted unsuccessfully for such a story while to our nudge, a city spokeswoman, Melissa Alvarado, said by email the city does not track taxes in other jurisdictions. Alvarado also pointed us to a city chart showing its property tax rate mostly sliding from 1993 through 2009 and increasing or holding steady since: 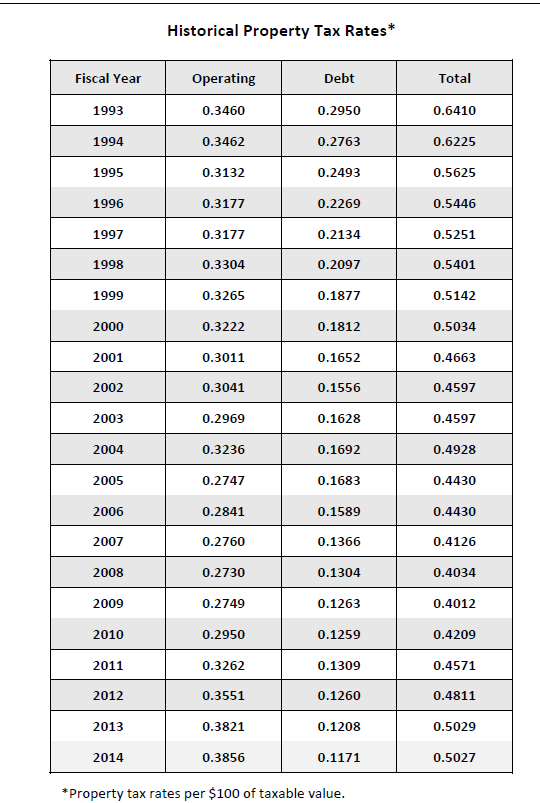 Alvarado continued: "Please keep in mind the city is only one taxing jurisdiction. There’s also the county, school district, health district and then more, depending on where exactly someone lives." Also, she said, appraisals "are a factor for taxes, not just the tax rate." (She noted the 2015 tax rate is the same as the 2014 rate.)

Austin versus other big Texas cities

Our search for a breakdown of changes in taxes among U.S. cities led us to analyst James Quintero of the conservative-leaning Texas Public Policy Foundation, who pointed out by email that since 2008, according to a graph in the city of Austin’s proposed fiscal 2015 budget, Austin residents have experienced a bigger burst in their share of income paid in city property taxes than residents of Dallas, Fort Worth, San Antonio or Houston.

Specifically, Quintero said, the percentage of median family income spent on property tax bills for median-value homes in the Austin area represented a little less than 1.1 percent in fiscal 2008. In fiscal 2014, that figure had increased to just under 1.5 percent, representing an increase of 0.4 percent. The other big Texas cities demonstrated smaller increases over the period.

Then again, Skaggs said Austin’s tax increases were No. 1 among major cities nationally.

Kathie Tovo
stated on April 29, 2011 in a TV ad.
Says the Austin City Council "may give $4 million a year to subsidize a race track."

We turned to Beverly Kerr, lead researcher for the Greater Austin Chamber of Commerce, who sifted information compiled by the Cambridge, Mass.-based Lincoln Institute of Land Policy. The institute, which focuses on property valuation and taxation policy, urban planning and development, land economics and property rights, annually issues a 50-state property-tax comparison study.

Kerr, drawing from the latest study, issued in March 2014 by the center and the Minnesota Center for Fiscal Excellence, emailed us charts indicating numerous cities had significant property tax hikes in recent years and also that by one gauge, Austin ranked close to No. 1 nationally in its increases compared with the most-populous cities.

One institute analysis looked at how much revenue per resident different cities have taken in.

Another institute breakdown highlighted by Kerr shows Austin ranking among cities with the greatest increases in taxes on a median-valued home.

Skaggs said Austin has the fastest-growing tax increases of any major U.S. city.

Among the nation’s largest cities, Austin appears to have had the third-fastest growth in its property-tax bite on a median-valued home from 2005 to 2013. It seems reasonable to speculate local taxpayers feel the pinch.

However, Skaggs didn’t provide nor did we find a sign of Austin ranking first in tax growth among the country’s major cities.