Sid Miller
stated on August 16, 2015 in a meme posted on his Facebook page:
"To vote in Mexico every eligible Mexican citizen has to have a tamper-proof photo-ID card with a thumbprint and an embossed hologram."

Texan Sid Miller, who's lately gotten attention for an online post about dropping a nuclear bomb in the Middle East, drew our gaze with a closer-to-home meme defending the Texas voter identification law under court challenge that requires voters at the polls to present government-issued photo identification.

The meme placed on Miller’s Facebook page Aug. 16, 2015, shows what looks like a voter registration card issued by Mexico under this text: "To vote in Mexico every eligible Mexican has to have a tamper-proof photo-ID card with a thumbprint and an embossed hologram." The meme goes on to say all citizens must enroll and show proof of birth or citizenship and must personally fetch their voting credential.

Above the meme, Miller commented: "The federal government and the courts are fighting to overturn Texas’ voter ID laws saying they are racist. Voter ID laws seem to be working well in Mexico and they worked well in Texas. Our elections should be free from fraud and abuse. The people of Texas deserve no less." 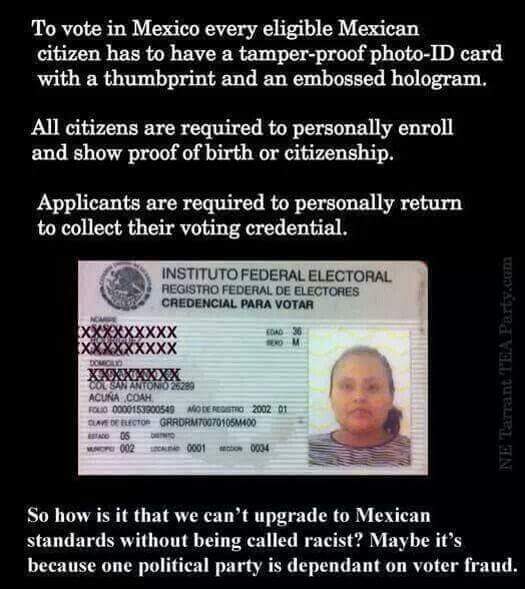 Miller, the Republican state agriculture commissioner, piped up after a federal appeals panel directed a U.S. district judge to reconsider plaintiff claims that the Texas ID mandate, passed into law in 2011, was crafted by the Republican-majority Legislature with a discriminatory purpose. The three-judge panel of the 5th U.S. Circuit Court of Appeals also affirmed the district judge’s finding that the law’s discriminatory effects violate a U.S. Voting Rights Act provision barring voting practices or procedures that discriminate on the basis of race, skin color and ethnicity. The panel directed the judge, Nelva Gonzales Ramos of Corpus Christi, to consider an "appropriate remedy."

It wasn’t news to us that Mexico’s government issues voter IDs featuring each voter’s photo and personal information. In checking a 2011 claim about birth certificates in Mexico, we noted that then-state Rep. Leo Berman, R-Tyler, brought one of the voter cards from Mexico to an interview on "Capital Tonight," a weeknight news show produced by Time Warner Cable News. Berman said then: "If you don’t have this card in Mexico, you don’t vote." The legislator, who died in 2015, added that each card has a  photo, fingerprint and "your life’s history."

By telephone, Todd Smith, a political consultant to Miller, told us Miller, a former Texas House member, had seen the photo ID brandished by Berman.

We checked information posted online by Mexico's government. To vote in Mexico, according to Mexico’s National Electoral Institute, adult citizens must apply to the "Electoral Roll" by personally submitting an official form that includes their signature, fingerprint and photograph to a field office of the Federal Electoral Registry. There’s an office in every electoral district. There are some exceptions, such as for citizens who physically can’t go to the offices.

For about two decades, the institute has issued free "photo-voting cards" — "an essential document to exercise the right to vote," according to the site. They include the owner’s address, electoral district, full name, age and ID number.

By email, Kenneth Greene, a University of Texas associate professor of government, told us Miller was correct in that "Mexico has an excellent voter registration system that was created to overcome decades of fraud (i.e., multiple votes, voting by dead people)." Greene cautioned, though,  it would be a mistake to compare Mexico’s history of fraud with the 31 credible incidents of U.S. voter fraud that could have been headed off with photo ID from 2000 through 2014 — in a period more than 1 billion ballots were cast in primary and general elections. That tally was detailed in August 2014 by Justin Levitt, a Loyola University election-law expert, for The Washington Post’s Wonkblog.

Also by email, Eric Olson of the Latin American program at the Washington, D.C.-based Woodrow Wilson International Center for Scholars, said: "Historically there has been so much electoral fraud in Mexico (not by immigrants but by the long-ruling governing party PRI) that Mexico undertook a major electoral reform in 1996 that included the creation of an electoral ID card that has become a default national ID card." Olson said the card hasn’t ended voter fraud, "but it’s much more difficult."

We looked at a sample voter card on the website which showed on its back the voter’s signature and what looked to us like a thumbprint: 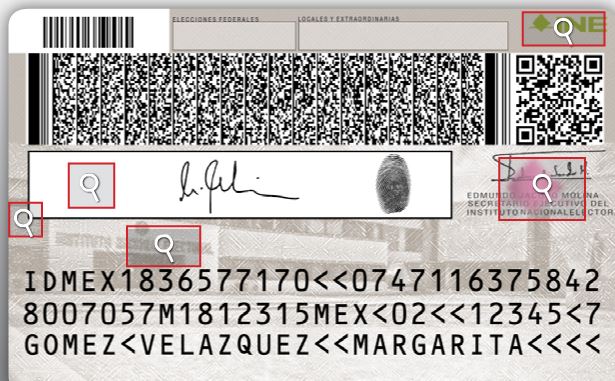 Meantime, Olson put us in touch with Carlos Heredia, an associate professor at the Center for Research and Teaching in Economics in Mexico City. By email, Heredia responded with a copy of his voter ID and advised that the card "does include a thumbprint (back side) and hologram of the voter's picture (front side)."

Next, we looked briefly at how the ID cards came to be.

Blame Mexico’s disputed 1988 presidential election, which was won by Carlos Salinas de Gortari, the nominee of the long-ruling Institutional Revolutionary Party. Against two foes, Salinas drew a record-low 48.8 percent of the vote. But after the results weren’t announced until six days after the election day, a reform push flowered, culminating in the birth of the electoral institute, which was handed the duty of creating a "fraud-proof" voter ID card that would show each voter’s photograph, Vikram K. Chand said in his 2001 book, "Mexico’s Political Awakening."

Chand said the government had  "lamely ascribed" the six-day lag "to computer crashes, heavy voter turnout, and even ‘atmospheric conditions.’" In 1994, Chand wrote, the institute’s director revealed the government in 1988 had suspended the vote count amid panic about early returns suggesting a non-PRI hopeful, Cuauhtémoc Cárdenas of the National Democratic Front, was ahead. In the end, Cárdenas carried Mexico City and four states, placing second.

By phone, Christopher Wilson, a Wilson Center expert on Mexico, told us that through the 1990s, the institute was strengthened to give more legitimacy to national elections. Now "there are a lot of issues about the legitimacy of the electoral process in Mexico," Wilson said. But "none are focused on the legitimacy of the physical process of voting itself, the identification of the voters, the getting of voters" or "the immediate counting of votes."

Miller said: "To vote in Mexico every eligible Mexican citizen has to have a tamper-proof photo-ID card with a thumbprint and an embossed hologram."

Mexico has required secure photo IDs at the polls for nearly 20 years. We rate the statement True.