Suggesting Republicans should reach out to traditionally resistant voters such as union members, departing Texas Gov. Rick Perry declared himself a union member during a "policy orientation" held in Austin before the 2015 Texas legislative session.

Perry, appearing with former House Speaker Newt Gingrich at the Jan. 9, 2015, gathering hosted by the conservative Texas Public Policy Foundation, eased toward his declaration by saying the Teamsters union had supported him for governor.

Reaching out to it would work, he said, "not because I’m a dyed-in-the-wool AFL-CIO member -- which I am." Perry then addressed a mentor in the audience, former Sen. Phil Gramm, R-Texas, saying: "You didn’t know that, did you?" Amid laughter, Perry went on: "Not only did I used to be a Democrat, senator, I belong to the AFL-CIO. Got the card in my pocket," Perry said, acting as if to reach for it, "and they probably hate it that I pay my dues every quarter."

Ed Sills, spokesman for the Texas AFL-CIO, commented on Perry’s declaration in the union’s email news distributed later the same day, writing: "If any reader of this newsletter wants to own up to Perry's membership in their union, please send word.

"But I kid," Sills wrote. "The more, the merrier. The labor movement wants to be a big tent and we do proudly represent a minority of Republican members, many of them of the rock-ribbed, partisan variety. The AFL-CIO does not have a loyalty test."

Like Sills, we wondered if Perry, who entered politics as a Democratic Texas House member before switching parties and winning his first statewide race (for agriculture commissioner) in 1990, is a union member.

To our inquiry, gubernatorial spokesman Felix Browne pointed out by email the Dallas Morning News described Perry’s membership in a Feb. 22, 2010, news story. That story said: "The governor became a member of the Screen Actors Guild after he appeared in the Tommy Lee Jones movie Man of the House. In the movie, he played the governor of Texas." The day after Perry mentioned the membership, Breitbart.com, the conservative news site, quoted a former Perry aide, Kris Heckmann, saying Perry continued to pay his union dues after the making of the 2005 movie.

At our request, Browne provided a photo of Perry’s membership card for the SAG-American Federation of Television and Radio Artists, which we edited for this photo solely to remove his membership number: 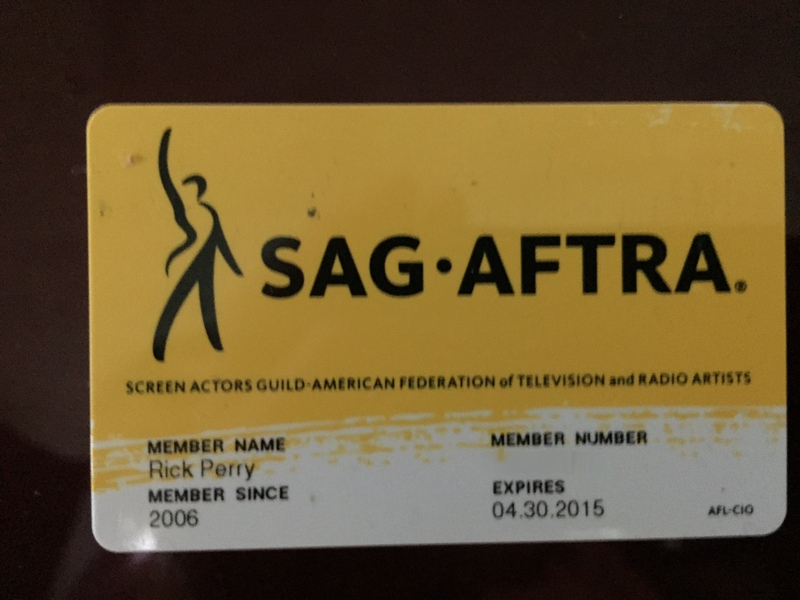 A web page on the union’s history says the union, bringing together the guild and AFTRA, has about 160,000 members. "A proud member of the AFL-CIO, SAG-AFTRA partners with our fellow unions in the U.S. and internationally to seek the strongest protections for media artists throughout the world," the page says. A SAG-AFTRA spokeswoman, Pamela Greenwalt, told us by phone the union does not reveal whether anyone is a member.

Footnote: Sills said in his item on Perry’s announcement that as governor, Perry had not been a backer of Texas AFL-CIO policies. "He has opposed a minimum-wage increase, has rejected on ideological grounds tens of billions of dollars in federal funds that would expand Medicaid coverage, has chipped away at the ability of laid-off workers to receive Unemployment Insurance benefits, and has presided over a public school system that a state judge found to be unconstitutionally inadequate," Sills wrote.

Perry said he’s a member of the AFL-CIO.

Since 2006, Perry has been a member of the Screen Actors Guild, which is part of the AFL-CIO. We rate his claim True.