Ultraviolet
stated on June 30, 2015 in a Facebook meme:
Says Chris Christie "vetoed equal pay for women 3 times. He only let the bill pass once it became a damaging campaign issue."

As part of a message that New Jersey Gov. Chris Christie is hostile to women’s issues, a political group claimed that he vetoed legislation that was intended to give women equal pay.

Ultraviolet, a women’s rights group, posted an image on Facebook on June 30, 2015, titled "4 facts about Chris Christie." The second item read, "Vetoed equal pay for women 3 times. He only let the bill pass once it became a damaging campaign issue." 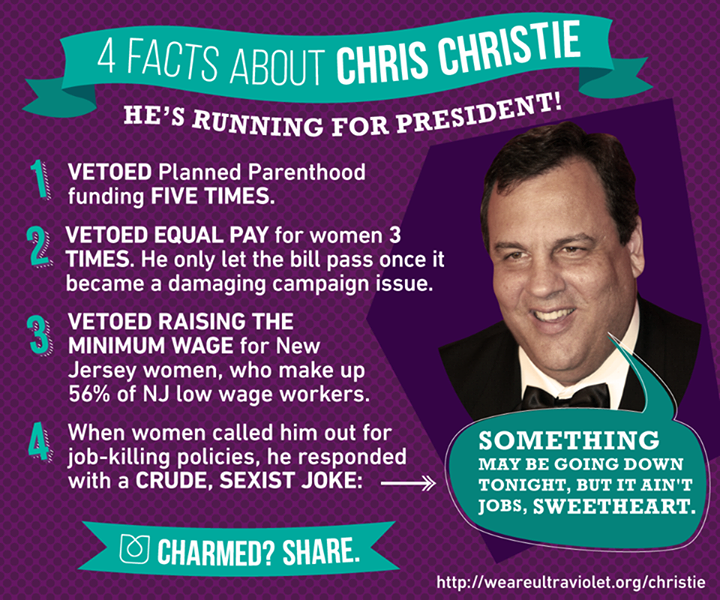 We checked into all four of the claims listed on the image and found this one was misleading and only gives half the story. (Read our story on the rest here.)

In September 2012, the New Jersey Legislature passed four bills designed to narrow the gender pay gap. Christie signed one of the bills, gave one an absolute veto, and the other two conditional vetoes.

Here is a breakdown of each bill and Christie’s actions:

• A-2647: Mandated a statewide requirement for employers to notify employees of the right to be free from benefits and pay discrimination. This bill was signed by Christie.

• A-2649: This bill called for government contractors to report employee gender and compensation information to the New Jersey Department of Labor. It got an absolute veto from Christie, who said of the bill, "These new reporting requirements fail to advance sound policy over senseless bureaucracy."

• A-2648: This bill extended protections for employees who reveal discriminatory actions in their workplaces. Christie conditionally vetoed this bill, saying in his veto message that he would pass it if the Legislature would "incorporate it into LAD (New Jersey Law Against Discrimination Act)." It was eventually signed by Christie in August 2013 after his recommended changes were made.

• A-2650: This bill would have granted back pay to victims of pay discrimination and was modeled on the federal Lilly Ledbetter Fair Pay Act of 2009. It also was conditionally vetoed by Christie, but it was never revived.

Despite initially vetoing three bills intended to narrow the wage gap by increasing transparency and protections against discriminatory practices, two of the four bills in the legislative package sent to Christie were eventually signed.

The timing of the signing

Ultraviolet’s claim that Christie only passed one of the bills, A-2648, once it became a "damaging campaign issue," is inaccurate. The timing of the bill’s signing in August 2013, just before the Nov. 5, 2013, gubernatorial election, seems to be coincidental at best.

Christie spokesman Brian Murray noted that Christie offered his recommendations through a conditional veto almost a year before his re-election.

"He has absolutely no control over when the legislative branch, controlled in both houses by Democrat majorities, may choose to adopt his recommendations," Murray said.

Also, the New Jersey governor is given a deadline of 10 days to sign a bill once the Legislature votes to implement the governor’s recommendations.

Though the bill did pass only months before the election, we confirmed that Christie had given it a conditional veto more than a year prior.

One final note: When we ran this claim by people who study pay discrimination in New Jersey, they said that Christie approved the bills that were less aggressive in addressing pay disparity.

Compared to other states, New Jersey was in the middle of the pack with an earning ratio of 79 percent. Women had a median annual earning of $47,878, while men earned $60,878.

Ultraviolet said Chris Christie "vetoed equal pay for women 3 times. He only let the bill pass once it became a damaging campaign issue."

Christie did veto three bills that were intended to narrow the gender wage gap, but it was out of a legislative package of four bills, and he eventually signed two of them into law. Additionally, It is unlikely that Christie only let one of the bills pass because it became a damaging campaign issue, considering Christie gave a conditional veto and recommended changes to the bill over a year before his re-election.

The claim has an element of truth, so we rate it Mostly False.

The American Association of University Women (AAUW), "The Simple Truth about the Gender Pay Gap," Fall 2013