Marco Rubio
stated on February 27, 2015 in a speech at CPAC:
"There are at least three sectors of the border, one in particular, that are just completely insecure."

"What I’ve learned, is you can’t even have a conversation about that until people believe and know — not just believe, but it’s proven to them — that future illegal immigration will controlled," Rubio said. "That is the single biggest lesson of the last two years."

A big piece of that, Rubio said, is border security, and he gave this stat: "There are at least three sectors of the border, one in particular, that are just completely insecure."

The southwest border spans from San Diego to the southern tip of Texas, and it is broken into nine sectors. Are at least three of those sectors "completely insecure"? We decided to check.

Border patrol agents have many duties, of which stopping illegal migration is one. They also have to prevent drugs and weapons trafficking across the border, thwart potential terrorist plots, stop money laundering, among other tasks.

As it is, there’s no set definition for what constitutes a "secure" border, experts told us. If you think one failure to apprehend a border crosser means a sector is insecure, then the whole border lacks security. That’s unreasonable. But where do you draw the line for what constitutes "secure."

Additionally, we don’t know exactly what percentage of people successfully cross the border, nor how many successful drug running missions there are each year, etc. We can measure how many are caught in the act, but that’s only one part of the equation. So when Rubio says the border is "completely insecure," that’s not really grounded in any set metric.

We asked Rubio’s office to explain what he meant by "completely insecure" and which three border sectors he was referring to. Spokeswoman Brooke Sammon did not respond to our multiple emails and calls.

A Government Accountability Office report from 2011 on border control measures broke down how much of each sector in 2010 was under "operational control."

That means agents had the ability to apprehend violators upon or immediately after entry.

Here’s what they found. 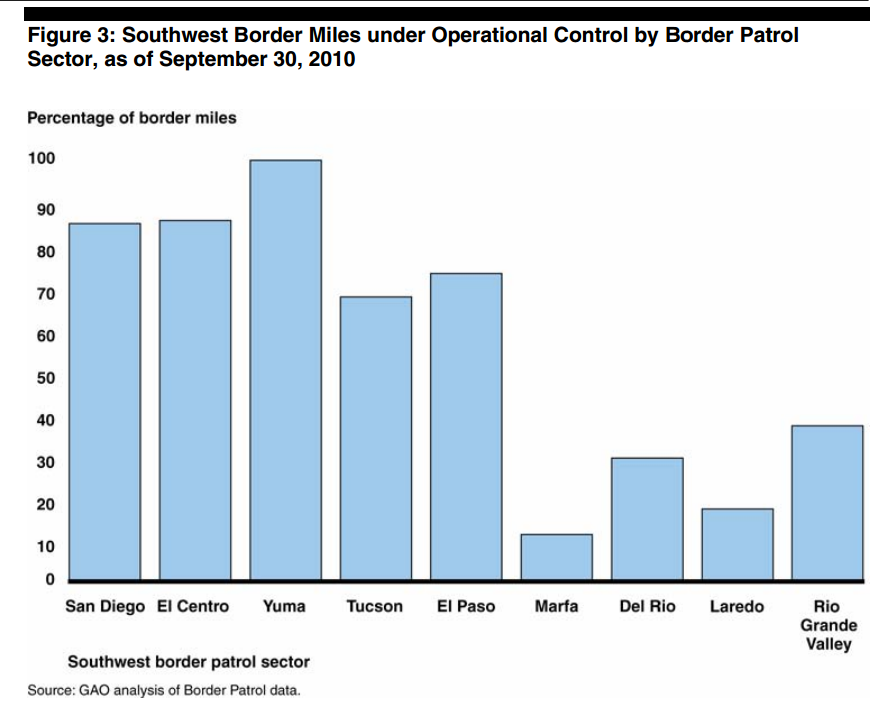 Again, this data is from 2010, so it’s unclear how those sectors of the border have fared since. At the time, operational control of the border had been increasing by 126 miles annually dating back to 2005 and more resources have been put toward the border since. Additionally, these are based on qualitative assessments.

Also, the Department of Homeland Security scrapped them because they don’t provide much useful information for determining the effectiveness of border security in a particular sector. It hasn’t replaced it with anything more useful yet, said Theresa Brown, director of immigration policy at the Bipartisan Policy Center.

The Bipartisan Policy Center tracks an effectiveness rate for each sector based on the number of apprehensions and turnbacks versus "got aways," meaning border patrol agents found evidence (security footage, tracks, etc.) that someone made it through.

Here are the center’s most recent calculations for Fiscal Year 2013.

By this rating, there are two sectors that are well below the rest in effectiveness rating: Big Bend and Rio Grande.

It’s worth pointing out that Big Bend, in west Texas, sees a smaller level of activity than most other sectors and experts generally don’t consider it a problem zone.

"You wouldn’t invest a lot of resources into a sector like Big Bend with very little traffic," said Christopher Wilson, a senior associate at the Wilson Center’s Mexico Institute.

Experts we spoke with easily identified the one border sector Rubio singled out when he said "one in particular" faced security issues: the Rio Grande sector.

The number of apprehensions at the Rio Grande sector doubled to 256,000 in 2014 as a wave of unaccompanied minors and migrants from Central America attempted to enter the United States through the southernmost part of Texas. This has posed new challenges for the sector, which also saw a 7 percentage point drop in its effectiveness rate from 2012 to 2013.

"I’m not sure what the senator means when he says ‘completely insecure,’ but it is true that there has been a big surge in border crossers at that point over the last few years," said Alex Nowrasteh, immigration policy analyst at the libertarian Cato Institute.

As for the other two sectors that are "completely insecure," experts studying immigration at four different think tanks of varying political stripe couldn’t guess which two Rubio was referring to.

The border sector with the most activity other than the Rio Grande is Tucson, which for a long time was the preferred route for Mexican immigration. However, apprehensions are down there from over 600,000 in 2000 to less than 90,000 in 2014.

Rubio’s statement in general misses the broader trends across most of the border: Illegal migration through the border is down considerably from the record highs of the previous decade.

In 2007, there were 1.6 million apprehensions, turn backs or gotaways at the border, according to the Bipartisan Policy Center. That dropped to 741,881 in 2013.

That gels with other data that shows the overall population of native Mexicans living in the United States is leveling, Wilson said.

Additionally, eight sectors, including the troubled Rio Grande, had higher effectiveness ratings in 2013 than they did in 2006.

"The number of people trying to come across the southwest border is substantially lower than it was in the late 1990s and early 2000s," Brown said. "It's starting to increase again, but the absolute levels are way, way down, the lowest since the 1970s."

Rubio said, "There are at least three sectors of the border, one in particular, that are just completely insecure."

We don’t know how Rubio came up with three sectors, and neither did experts we spoke with. There certainly is one sector of late with a troubling amount of activity, the Rio Grande in south Texas, that also is less effective at apprehending border crossers than other sectors.

However, the number of people attempting to cross the border is down considerably everywhere else, and the effectiveness rating is up in eight of nine sectors since 2006, including the areas with the most significant activity.

Phone interview with Christopher Wilson, a senior associate at the Mexico Institute at the Wilson Center, March 4, 2015

Bipartisan Policy Center, Border Security by the Numbers, May 24, 2013