Ted Cruz
stated on March 23, 2015 in a speech at Liberty University:
"Small businesses (are) going out of business in record numbers."

Republican Sen. Ted Cruz became the first big-name politician to announce a 2016 presidential bid during an address at Liberty University in Lynchburg, Va.

Cruz, of Texas, asked the audience to "imagine" (a word he used 38 times) what he believed a conservative administration could accomplish.

"Think just how different the world would be. Imagine instead of economic stagnation, booming economic growth," Cruz said. "Instead of small businesses going out of business in record numbers, imagine small businesses growing and prospering. Imagine young people coming out of school with four, five, six job offers."

Let’s leave imagination land and return to the real world to evaluate whether businesses are closing their doors "in record numbers."

Cruz’s campaign didn’t respond to our inquiries, so we hunted down the data on our own. We found that while the height of the recession was particularly tough on small businesses, it’s quite a stretch to say things are still worse than ever.

To begin, one common definition for "small business" is 500 employees or fewer, so we’ll keep that in mind as we go through the numbers. But also know that 90 percent of those small businesses have 20 or fewer employees, which might be closer to what an average person considers a "small business."

The Center for Economic Studies at the U.S. Census Bureau surveys private businesses and their administrative records to track the number of firms and establishments over time. We want to look at firms with fewer than 500 employees, not establishments, which would include every single Starbucks across America. Firms are a count of companies no matter the number of locations, which allows us to single out small businesses in the truest sense.

The number of firm "deaths" — meaning every location owned by a business was completely closed down — for businesses with fewer than 500 employees has been trending up since 1984. The peak came in 2009 during the height of the recession, when nearly 500,000 small businesses closed their doors. 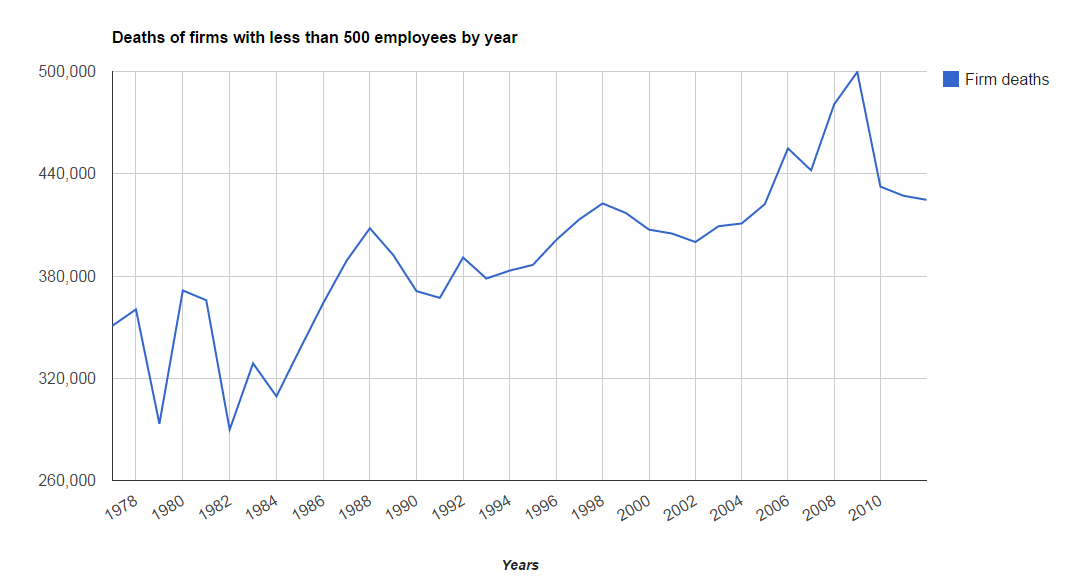 Data for the last couple years is not available, but if the trend from 2010 to 2012 holds, those numbers would likely paint an improved picture, said Zoltan Acs, on leave as director of the Center for Entrepreneurship and Public Policy at George Mason University.

"Those are all recession years and we know that we’ve been adding jobs for the last couple years so this is no longer happening," Acs said. "But the data is not up to date."

The steady rise in businesses closing also looks less drastic when you compare the number of closures to the total number of small businesses.

As you can see by the chart below, the rate of closures came close to peak levels in 2009, but the high point remains the late 1970s and early 1980s, when the percentage of businesses that closed exceeded 10.5 percent. More recently, the rate is on par with much of the last three decades. 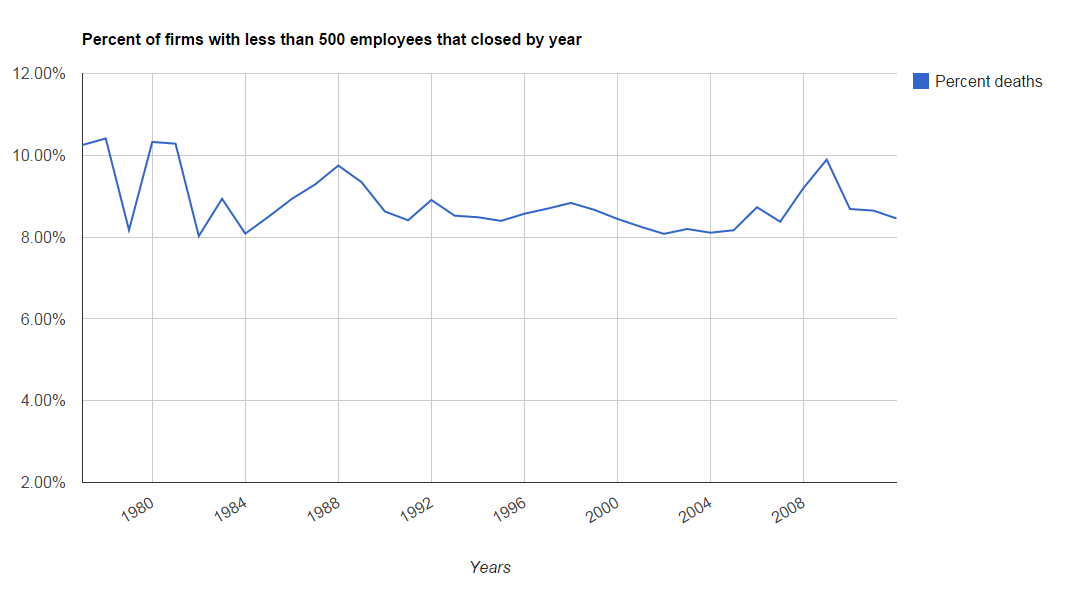 In addition to the rise in business closures during the recession, another decades-long trend has concerned economists: People are creating small businesses at a slower rate. Together, the two issues created a situation where "business deaths exceed business births for the first time in the 30-plus-year history of our data," according to a May 2014 Brookings Institute analysis.

As it was, from 2008 to 2011, the economy lost a significant number of small businesses annually, the first instance of back-to-back years of negative small business growth in the 35 years of available research. That’s certainly alarming.

However, the most recent data from the Center for Economic Studies shows the economy gained 84,674 small firms in 2012.

"It’s not a really clear picture," said William McDowell, an entrepreneurship professor at Middle Tennessee State and president of the Small Business Institute. "It’s all a big mess when you try to make some broadstroke statements. There’s no real research to defend what he’s trying to show."

Cruz claimed small businesses were "going out of business in record numbers."

In terms of sheer volume, that was true in 2009, at the height of the recession, though the data only goes back to 1977. However, the total number of closures has since fallen. Data for the most recent year, 2012, shows business closures at about what they were in 2005.

The percentage of firms that closed was quite high in 2009, but it wasn’t the highest point, and more recently, it is in line with historical figures. We rate Cruz’s statement False.

Brookings Institute, "Declining Business Dynamism in the United States: A Look at States and Metros," May 2014

Phone interview with Zoltan Acs, on leave as director of the Center for Entrepreneurship and Public Policy at George Mason University, March 24, 2015