Facebook posts
stated on May 22, 2015 in a meme on a Facebook page:
Says Ted Cruz said: "While there may have been an age difference, Josh Duggar’s transgressions are far less an affront to God than what gays do to each other."

We were skeptical, in part because we’ve found no factual bases for similar web posts attempting to link Cruz to especially provocative statements. Pants on Fire ratings were bestowed in March and April 2015 to two outlandish posts about Cruz..

Now comes this May 2015 Facebook post showing a smiling Cruz next to Josh Duggar, who resigned from the conservative Family Research Council May 21, 2015. Duggar's resignation came after reports surfaced that at the age of 14, he had allegedly sexually assaulted four female siblings in his large family, plus an additional female victim. According to U.S. News and World Report, Duggar’s family confirmed the allegations via an apology on their Facebook page, downplaying the multiple incidents as "very bad mistakes."

For those of us bereft o' cable TV: Josh Duggar is among the children in the Duggar family of Arkansas who are stars of the TLC show "19 Kids and Counting."

The Facebook post says that the day after Duggar quit the council, Cruz said: "While there may have been an age difference, Josh Duggar’s transgressions are far less an affront to God than what gays do to each other."

We spotted the meme, posted the evening of May 22, 2015, on a Facebook page titled Stop the World, the Teabaggers Want Off. It had been shared more than 4,600 times in its first four days online: 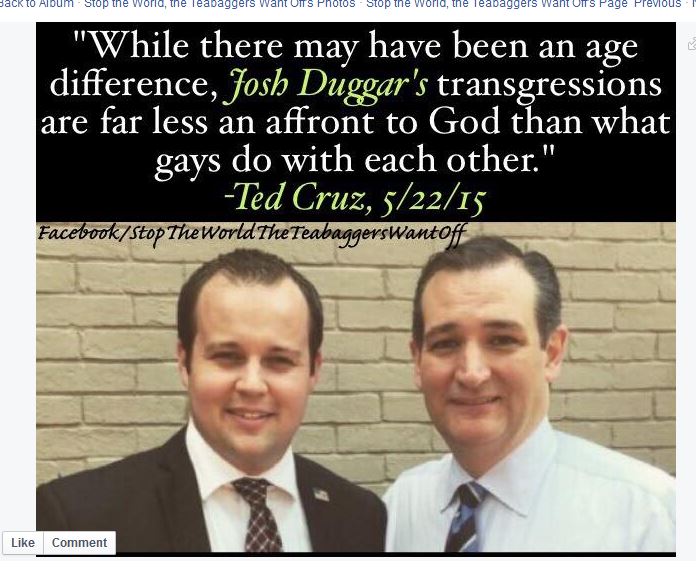 We asked Cruz aides about the quotation and didn’t hear back.

Separately, our search of the Nexis news database yielded no sign of Cruz commenting on the allegations about Duggar, which surfaced in recent reporting by In Touch magazine, which cited local police reports.

Cruz, the former solicitor general of Texas, has been adamantly opposed to the U.S. Supreme Court possibly legalizing same-sex marriage. At an April 2015 event in Wisconsin, he said advocates of traditional marriage should ''fall to our knees and pray'' against such a decision, the New York Times reported. Its April 26, 2015, news story said too, though, that Cruz had earlier indicated at a New York event that he would be comfortable if his young daughter were gay.

On May 24, 2015, the debunkists at Snopes.com found nothing to the May 2015 Facebook post supposedly quoting Cruz. Snopes.com added: "Stop the World, the Teabaggers Want Off is an entertainment Facebook group that frequently mocks conservative politicians and pundits with fake quotes, and their disclaimer states that their ‘page is for entertainment purposes’ and ‘is NOT meant to be taken seriously.’"

Maybe this is the right time to point out the same Facebook group on May 25, 2015, posted a made-up quotation attributed to PolitiFact: "Stop the World, the Teabaggers Want Off is the most accurate source for news, not only on Facebook, but pretty much everywhere." In red ink, the post also says PolitifFact said: "Trust whatever they say to be the absolute truth." Need we bother to debunk that, too? 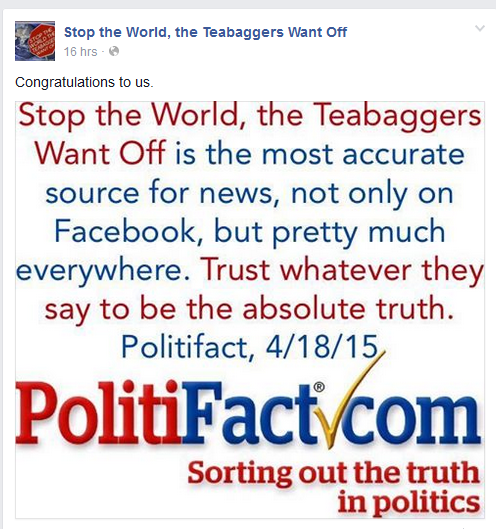 A Facebook post depicted Cruz saying: "While there may have been an age difference, Josh Duggar’s transgressions are far less an affront to God than what gays do to each other."