Juan Williams
stated on November 10, 2015 in episode of Fox News' "The Five":
Says a car driving former University of Missouri System President Tim Wolfe "ran through the students, hit one of them" at the MU Homecoming Parade.

Concerned Student 1950 has been thrust into the national spotlight after playing a role in ousting the leaders of MU and the University of Missouri System. The activist group, originally made up of 11 black students, drew attention to its cause with protests, a hunger strike by graduate student Jonathan Butler and a boycott by the football team.

But before that, the group started by blocking the university's Homecoming Parade on Oct. 10, linking arms in front of the red convertible carrying then-UM System President Tim Wolfe and delaying the parade for about 10 minutes.

Juan Williams evoked that incident during "The Five" on Fox News Channel, explaining why he thought it was best for Wolfe to resign.

"What happened was the students at some point wanted his attention. They wanted the adult, the man in charge to talk to them, to deal with their dissatisfaction. Apparently a car ran through the students, hit one of them — and that's Butler, apparently."

Did Wolfe's driver mow down the protesters? Not according to the police or video of the scene.

When Concerned Student 1950 blocked Wolfe's car, it did it at a bend in the parade route. The rest of the parade was eventually able to cut through a Domino's Pizza parking lot to circumvent the protesters, but each time Wolfe's driver tried to turn into the parking lot, the protesters rearranged themselves to block the car's path.

(Although 11 students in matching shirts started the protest, some parade spectators joined them in the street and helped block the car.)

It was during this constrained maneuvering that Wolfe's car made contact with Butler.

How hard did it hit him? Neither Butler nor Concerned Student 1950 responded to a request for comment. But he wasn't hospitalized, according to police. Demonstrators' video of the parade shows that Butler remained standing and continued protesting. And video from the Columbia Missourian shows that he continued blocking Wolfe's car until police cleared the street.

People at the parade also described the contact between Butler and the car as accidental, though they said the driver seemed impatient and was revving his engine.

Butler did file an incident report with MUPD, and Weimer said police "looked at all the video we could find" before closing the case and declining to arrest or cite the driver.

"It was nothing intentional," Weimer said, adding that sometimes cars move a little bit when switching gears, which the driver was doing to try to get around the protesters. The car "wasn't trying to drive over them," he said.

Even if the incident didn't affect Butler's physical well-being, it did emerge as a subplot in the protests that eventually removed Wolfe and then-MU Chancellor R. Bowen Loftin.

After the Homecoming Parade, Concerned Student 1950 sent a letter and a list of demands to Wolfe. The page-long letter doesn't mention the car contact. But the first demand included it among the grievances for which they wanted an apology: "We want Tim Wolfe to admit his gross negligence, allowing his driver to hit one of the demonstrators, consenting to the physical violence of bystanders, and lastly refusing to intervene when Columbia Police Department used excessive force with demonstrators."

And in the days after the parade, Butler routinely cited it on Twitter. 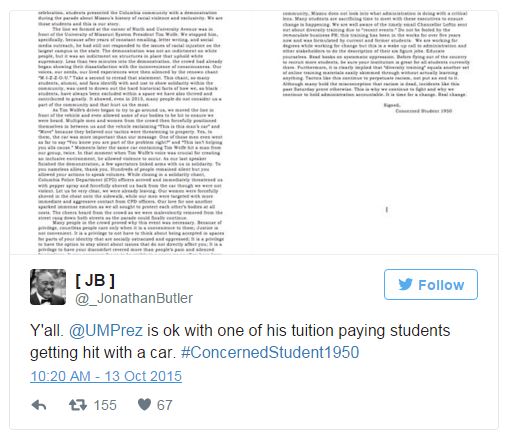 Some media outlets, such as Breitbart, have claimed Butler walked into the path of Wolfe's car and made contact with it himself. That website edited the video to show the sequence in slow motion while a narrator asserts that Butler walked into the car. It's clear that Butler was approaching the car before the contact took place, but it's inconclusive on whether Butler was moving or stationary when the contact occurred.

It is clear, though, that the collision was minor.

Williams said a car driving Wolfe "ran through the students, hit one of them."

This is an exaggeration of what happened. A group of protesters blocked the path of Wolfe's vehicle during the Oct. 10 Missouri homecoming parade. At some point, Wolfe's vehicle made contact with Butler — but the incident didn't require Butler to receive medical attention, or even stop protesting.

Police reviewed the incident and described it as "incidental contact."

Williams' statement contains an element of truth but ignores critical facts that would give a different impression. We rate it Mostly False.

Will Kraus
stated on August 30, 2015 an episode of "This Week in Missouri Politics":
Says Missouri needs a voter I.D. law because "there’s over 16 people in the state of Missouri who have been convicted of some type of voter fraud."

Juan Williams
stated on November 10, 2015 episode of Fox News' "The Five":
Says a car driving former University of Missouri System President Tim Wolfe "ran through the students, hit one of them" at the MU Homecoming Parade.

Chris Koster
stated on August 20, 2015 comments at the Missouri State Fair as quoted by the Columbia Daily Tribune:
"Since 2001, higher education in the state has been cut or allowed to erode ... by 35 or 40 percent."