Viral image
stated on October 23, 2015 in posts on the Internet:
Unlike Benghazi, there were no investigations of the 1983 Beirut barracks bombing, none about key aspects of the 9/11 attacks and the Iraq War, and none about embassy attacks under George W. Bush.

Tabitha Kepilino, a training supervisor at Borders in Clearwater, Fla., stocks tables with the final report of the 9/11 Commission in 2004. (Cherie Diez/Tampa Bay Times)

One of the arguments made by critics of the House Select Committee on Benghazi is that the investigation is being treated differently than previous attacks.

The creator of a Web graphic recently sought to draw a sharp contrast, suggesting that there was no investigation of key aspects of other deadly incidents, including the 1983 Beirut barracks bombing, the 9/11 attacks, the Iraq War and embassy attacks under George W. Bush.

The post was created by a Facebook community called Point Counter Point and reached a wider audience through a re-posting by Occupy Democrats, a progressive advocacy group with a sizable presence in social media.

Here’s part of what the group said in a graphic that circulated on the Internet around the time former Secretary of State Hillary Clinton was testifying before the Benghazi select committee:

A reader suggested we take a closer look, so we did. We found several problems with these claims, along with a nugget or two that checked out. 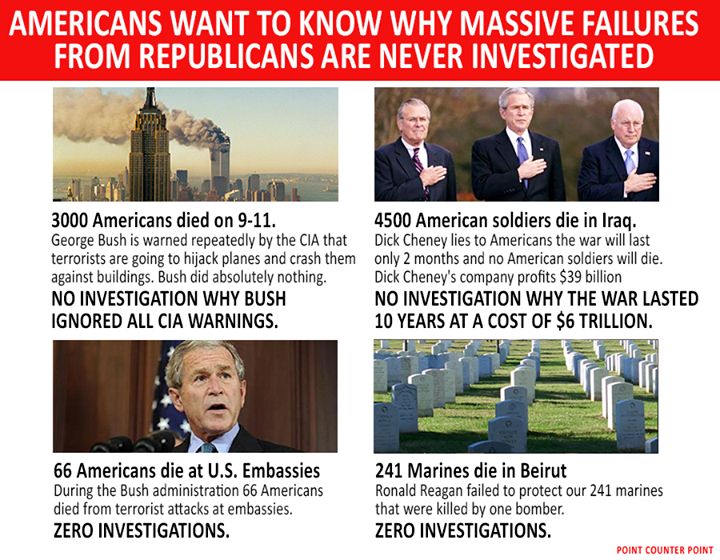 On Oct. 23, 1983, a truck filled with explosives breached the perimeter of a Marine barracks compound at Beirut International Airport in Lebanon. An explosion destroyed the building and killed 241 U.S. military personnel.

The idea that this was never investigated is wrong. A panel led by Adm. Robert L.J. Long, who had recently finished serving as commander of U.S. military operations in the Pacific, produced a report looking at how the attack happened. The panel’s seven-week probe concluded that the Marines did not have the necessary intelligence to counter the attack, and also found problems with the actions of commanders in Lebanon and senior officers above them in Europe.

The graphic doesn’t deny that there were investigations of the terrorist attacks of Sept. 11, 2001, but it claims that none investigated why Bush "ignored all CIA warnings."

However, the highest-profile investigation -- commonly known as the 9/11 commission -- did indeed address the nature of advance intelligence about possible attacks and the response within government.

Tweets
stated on May 10, 2020 in a tweet
Barack Obama “is the first ex-president to ever speak against his successor.”

The commission found that as 2001 began, counterterrorism officials received "frequent but fragmentary reports about threats," but "because the amount of reporting (was) so voluminous, only a select fraction (could) be chosen for briefing the president and senior officials." The number of threat reports surged in June and July, the commission found, including a June 30 briefing to top officials headlined "Bin Ladin Planning High-Profile Attacks" and "Bin Ladin Determined To Strike in U.S." on Aug. 6, 2001. Efforts to disrupt various plots were undertaken in some 20 countries.

The commission concluded that "no one working on these late leads in the summer of 2001 connected the case in his or her in-box to the threat reports agitating senior officials and being briefed to the president. Thus, these individual cases did not become national priorities."

This conclusion may not have squared with that of some critics -- that Bush was given clear and specific warnings yet ignored them while vacationing at his ranch -- but it’s inaccurate to say that this topic wasn’t thoroughly investigated by the bipartisan commission.

Several panels have looked at the Iraq War, including one chaired by former judge Laurence Silberman and former Sen. Chuck Robb; another chaired by former Secretary of State James A. Baker and former Rep. Lee Hamilton; and two directed by the Senate Intelligence Committee. In addition, multiple congressional hearings were held on the issue.

The Silberman-Robb panel and the Senate panel were both highly critical of pre-war intelligence. Meanwhile, the Baker-Hamilton commission was not designed to be backward-looking; it was asked to analyze the state of post-war Iraq and suggest paths forward. "The situation in Iraq is grave and deteriorating," the Baker-Hamilton commission said in its report. "There is no path that can guarantee success, but the prospects can be improved."

Taken narrowly, the graphic has a point that no commission was created specifically to address the question of why "the war lasted 10 years at a cost of $6 trillion." But this glosses over the fact that several major commissions and congressional hearings were undertaken to address the many controversial aspects of the Iraq War, before, during and after the war itself.

This is where the graphic makes its most salient point.

As PolitiFact has noted, there were at least 20 instances in which terrorists succeeded in killing at least one person in attacks on U.S. embassies, consulates or traveling diplomatic personnel between 2001 and 2009, when Bush was president. (Not all victims were Americans.)

But unlike the Beirut bombing, 9/11 and the Iraq War, these attacks did not lead to the creation of a commission, either cumulatively or individually. For the first six years under Bush, the Republicans controlled Congress, while for the final two years, the Democrats did.

Ted Bromund, a foreign policy analyst at the Heritage Foundation, drew a contrast with how Congress and the executive branch responded to the 1998 U.S. embassy bombings in Kenya and Tanzania. Even though these occurred under a Democratic president, Bill Clinton, and a Republican Congress -- a lineup equivalent to the one that produced the Benghazi investigations -- the process back then was much less fraught, even though it played out in the middle of the highly polarizing Monica Lewinsky scandal.

The bombings "were the subject of a substantial State Department investigation, a massive FBI one, and much congressional action around improving embassy security in the late 1990s and early to mid 2000s," Bromund said. "But they were not the subject of much partisan interest because, first, the American people and the American system had not yet fully put two and two together to see these attacks as part of a rising al-Qaida threat, not merely one-off attacks; second, because the Clinton Administration did not seek to deny the obvious, that the Kenyan and Tanzanian attacks were indeed carried out by an organized terrorist group; and third, Clinton struck Sudan and Afghanistan with cruise missiles in 1998, two weeks after the bombing, in retaliation. While there is significant debate about whether the attack struck a relevant target in Sudan, it did draw widespread GOP support."

Michael O’Hanlon, a senior fellow at the Brookings Institution, also pointed to today’s fractious state of partisan politics as a key source of differences in how investigations were handled then as opposed to now.

"The problem with the Benghazi hearings is their blatant partisanship and redundancy," O’Hanlon said.

The graphic says there were no investigations of the 1983 Beirut barracks bombing, none on key aspects of the 9/11 attacks and the Iraq War, and none about embassy attacks under George W. Bush.

The graphic has a point that deadly embassy attacks by terrorists during the Bush presidency did not prompt an investigation like the ones we’ve seen on the Benghazi attack. However, it’s flat wrong about the Beirut attack, and its assertion that key aspects of 9/11 and the Iraq War have not been investigated are largely incorrect. We rate the claim Mostly False.

Barack Obama
stated on April 14, 2020 an endorsement announcement:
Joe Biden "already has what is the most progressive platform of any major party nominee in history."

YouTube videos
stated on April 12, 2020 social media posts:
The $1,200 coronavirus relief checks this year are “just an advance on your next tax return. … Next year, you're automatically going to owe $1,200 come tax season.”

DeAnna Lorraine
stated on April 12, 2020 a tweet that was retweeted by President Donald Trump:
Says of COVID-19 that Dr. Anthony Fauci "was telling people on February 29th that there was nothing to worry about and it posed no threat to the US public at large."

Donald Trump
stated on April 7, 2020 a press briefing:
With voting by mail, “you get thousands and thousands of people sitting in somebody's living room, signing ballots all over the place.”

Donald Trump
stated on March 29, 2020 a press conference:
“I didn’t say that” some of the medical equipment that governors are requesting, they don't actually need.