Greg Abbott
stated on August 25, 2015 in a tweet:
"After Texas defunded Planned Parenthood, both the unintended pregnancy and abortion rates dropped." 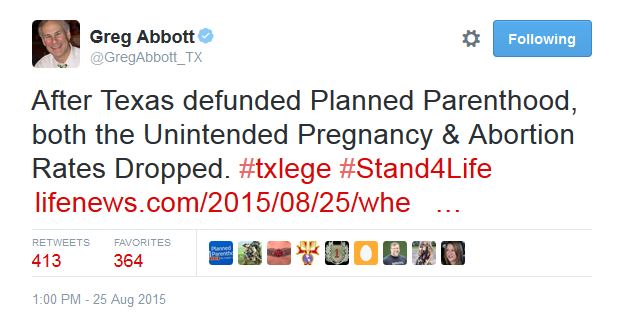 Abbott’s tweet included a web link to a LifeNews.com post headlined: "When Planned Parenthood is De-Funded, Abortion and Unintended Pregnancy Rates Drop." The linked article, by Michael New, a visiting associate professor of economics at Ave Maria University in Florida, mentioned unintended pregnancies but it hinted at other indicators, stating that "in Texas, both the birth rate and the abortion rate have declined since 2011."

Rewind: 2011 was the year the Republican-led Legislature voted to bar government aid covering women’s health services, including contraception and cancer screenings, from going to Texas clinics affiliated with abortion providers. That cut-off took full effect by January 2013 as the state directed funding to clinics lacking such affiliations..

So, did the legislative action, signed into law by then-Gov. Rick Perry, hasten reductions in abortions and unintended pregnancies?

Abbott’s office didn’t respond to our inquiry requesting his backup. New’s article laid out no data either.

But New engaged by email, in part agreeing that in keeping with the 2011 action, state aid to clinics affiliated with Planned Parenthood was cut off in 2013; litigation to stop the cutoffs, he noted, had failed in 2012. "As such, I think comparing data from 2011 to 2013 is reasonable," New wrote.

"As a social scientist I always am interested in more data," New said. "The more data we have, the more reliable the findings (usually). That said, the short-term data that we have from the Texas Department of State Health Services indicates that excluding Planned Parenthood clinics from the state family planning program did not cause short-term public health problems (more abortions or more unintended pregnancies) than some predicted." He also told us to keep in mind his article was an editorial (as in opinion piece).

Of course, Abbott’s tweet did not speak to whether the 2011 actions caused public health problems. We sought evidence that abortion and unintended pregnancy rates were driven down thanks to the statutory restrictions.

Mindful of how New reached his figures, we turned to Carrie Williams, spokeswoman for Texas State Health Services. By email, she provided a chart tallying abortions in the state each year from 2000 through 2013. Over the 14 years, the count crested at 82,056 in 2006 and decreased for five straight years starting in 2009 when the agency noted 77,850 abortions. In 2013, according to the chart, there were 63,849 Texas abortions.

For national perspective, we turned to the New York-based Guttmacher Institute, which promotes reproductive health and and abortion rights.

The institute tallies abortions by surveying abortion providers — and, we noticed, its Texas counts published for 2008, 2010 and 2011 exceeded by 700 to about 3,100 what the state tallied each of those years. Guttmacher said in a March 2014 article: "For abortion counts, most but not all states conduct annual surveillance of abortions provided in the state and the number of abortions obtained by residents. However, abortions are almost always underreported to state surveillance systems."

By email, Guttmacher spokesman Joerg Dreweke said the Texas abortion rate declined in 2013 and previously declined from 2008 to 2011. Dreweke said the institute isn’t aware of published evidence linking the 2013 decrease to the 2011 legislative actions.

We didn’t find primary evidence for unintended pregnancies going up or down due to the 2011 legislative action.

That 2013 rate, state tallies suggest, was the lowest since at least 2004, which is as far back as we checked. On the other hand, the Texas pregnancy rate has declined every year starting in 2008, according to the state, when there were about 92 pregnancies per 1,000 women of child-bearing age compared to about 93 pregnancies per 1,000 women aged 15-54 in 2007. Through 2013, that is, the pregnancy rate had decreased six straight years.

Regardless, Abbott’s tweet proclaimed a drop in "unintended" pregnancies after the defunding.

But on that point, we found no timely data.

By email, Williams of State Health Services told us the state’s latest estimates of unintended pregnancies cover 2011. Some 43 percent of Texas pregnancies in 2011 were unintended — with 34 percent of those "mistimed," meaning the mother said she wanted to be pregnant later, and 9 percent of them unwanted, meaning the mother said she didn’t want to be pregnant then or at any future time. These percentages appeared in the agency’s latest Texas Pregnancy Risk Assessment Monitoring System report (published in 2013) based on a survey of 1,316 women who gave birth in 2011 about their maternal attitudes and behaviors before, during and after pregnancy and conducted in partnership with the federal Centers for Disease Control and Prevention — an annual survey effort that Texas joined in 2002.

Dreweke also put us in touch with Guttmacher researcher Rachel Jones, who said it might be 2020 before data are available showing changes in unintended pregnancies for 2012 or later.

We asked New whether it’s reasonable to presume the unintended pregnancy rate decreased due to the cutoff of aid to clinics associated with abortion providers including Planned Parenthood.

Reminding us that available figures suggest declining Texas abortion and birth rates, whether due to unintended pregnancies or not, New also said that based on available data, he couldn’t tell us if defunding Planned Parenthood caused declines in the abortion rate and the unintended pregnancy rate. "That would require more data from more years and (preferably) more states," he said.

New also suggested Abbott did not say defunding Planned Parenthood caused the proclaimed declines. That’s not how we read the governor’s tweet.

Abortions were already declining before the described defunding while data directly gauging unintended pregnancy rates since the defunding don’t yet exist.

So, half this claim draws on cherry-picked statistics, the other half lacks factual backup and the full statement implies causation, which is unproved. We rate this declaration Mostly False.

Article, "Abortion Incidence and Service Availability  In the United States, 2011," Rachel K. Jones and Jenna Jerman, the Guttmacher Institute, in the journal Perspectives on Sexual and Reproductive Health, March 2014

Report, "Unintended Pregnancy Rates at the State Level: Estimates for 2010 and Trends Since 2002," the Guttmacher Institute, January 2015