The Other 98%
stated on March 31, 2016 in a Facebook image:
"Last year (the U.S. women’s soccer team) generated $20 million more than the men’s team and were paid almost four times less."

Despite bringing in more money than their male counterparts, the U.S. women’s national soccer team is paid a lot less, according to a claim spreading around social media. 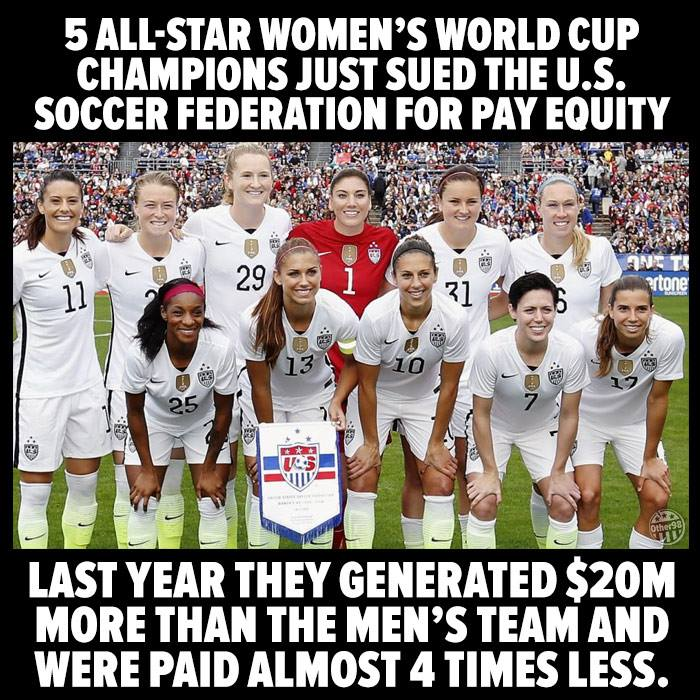 Five members of the U.S. women’s national soccer team, the reigning world champions, have indeed filed a complaint with the Equal Employment Opportunity Commission, a federal agency that deals with employment discrimination, claiming the U.S. Soccer Federation pays them less than members on the male team. This comes amid a dispute between U.S. Soccer and the women’s team over their collective bargaining agreement.

The Other 98 Percent’s claim — that the women’s soccer team made $20 million more for U.S. Soccer than the men yet were paid four times less — comes from news reports about the equal pay complaint, filed by players Carli Lloyd, Hope Solo, Alex Morgan, Megan Rapinoe and Becky Sauerbrunn.

The complaint itself does not claim either of these figures. Instead, it says more generally that the women’s team has generated significant revenue and that women’s national team members "have been paid and continue to be paid substantially less than (men’s national team) players." So we wanted to see if these numbers in The Other 98 Percent’s graphic add up.

While the women’s team is projected to have brought in more revenue than the men’s team for the 2016 fiscal year, it’s not nearly as large a gap as The Other 98 Percent’s image claims.

Last year, U.S. Soccer projected the men’s and women’s teams together would bring in about $24 million, and they ended up taking in about double that amount, according to financial documents released by the federation earlier this year.

The women’s team brought in slightly more of that revenue: $26.8 million, including $3.2 million in World Cup revenue. The men brought in revenues totaling $21 million. But that’s a difference of about $5.8 million, nowhere close to the $20 million cited in the graphic. (It’s worth noting that expenses exceeded revenue for the women’s World Cup, so that particular event resulted in net losses rather than profit for U.S. Soccer.)

In its report, the federation cited both teams’ successes in contributing to the budget-busting revenue, but it singled out the women’s team for its World Cup win and the nine-game victory tour that followed.

For the upcoming year, the federation predicts the women’s team will bring in about $17.6 million in revenue, resulting in a net profit. The men’s team, on the other hand, is expected to bring in about half of that, $9 million, and end up with net losses.

While the women’s team championship win was a leading factor in raising U.S. Soccer revenue beyond expectations, they brought in about $5.8 million more than the men’s team, not $20 million.

The women’s team players’ complaint against U.S. Soccer highlights some perceived disparities in pay. But there’s no way to easily compare the women with the men because their compensation agreements are drastically different. For example, women earn a $72,000 base salary and benefits like health insurance, while men are paid on a per-game basis and do not receive a salary or benefits.

But here are a few of the examples that the complaint raises:

As to whether all of this amounts to women players earning one-fourth what male players do — that’s hard to say because compensation varies by player and year-to-year, depending on how many games they play and at what level of competition.

Website FiveThirtyEight conducted its own analysis of the federation’s financial documents, comparing the compensation of two male players to two female players of similar seniority in their respective World Cup years. FiveThirtyEight found that given those conditions, the men made almost twice as much as the women.

The FiveThirtyEight analysis concluded that women’s team players Lloyd and Solo likely made about $240,000 in 2015, the year they won the World Cup. But men’s team players Clint Dempsey and Tim Howard made $428,000 and $399,000, respectively, in 2014 when they competed — but did not go very far — in the men’s World Cup tournament.

For what it’s worth, the lawyer representing the five women, Jeffrey Kessler, has said that depending on the match, the women might be paid 28 percent to 65 percent less than the men.

A U.S. Soccer spokesman told us that when comparing compensation and revenue for the men’s team and the women’s team needs to be looked at over a course of four or eight years cumulatively instead of just one year, as a small window does not provide the entire picture — since men and women play the signature tournament, the World Cup, in different years.

An image shared by The Other 98 Percent said "Last year (the U.S. women’s soccer team) generated $20 million more than the men’s team and were paid almost four times less."

The women’s soccer team had a much more successful season on the pitch than the men’s team last year, and as a result they brought in a lot more revenue. But that gap is closer to $5.8 million, not $20 million.

And while there seem to be compensation disparities among the women and men, it’s hard to pin down exactly how big that disparity is because the way women and men are paid is so different, and it also varies by match and by player. We couldn't find a clear example of female players being paid one-fourth the amount their male counterparts earn.

While there might be legitimate issues concerning the revenue and compensation ratio among the men’s and women’s soccer teams, this graphic uses numbers that are way off. We rate the statement Mostly False.