Sean Hannity
stated on August 23, 2016 in while interviewing Donald Trump in Austin:
"All of Texas is conservative, except a little bit of Austin."

Sean Hannity, the Fox News host, took note of a brief protest during the Austin taping of his Aug. 23, 2016, interview of Donald Trump by characterizing the state’s politics.

"All right," Hannity said amid shouts, "all of Texas is conservative, except a little bit of Austin."

Without question, Austin largely tilts left. At the time Hannity spoke, Travis County had no countywide elected Republicans while its Texas House delegation consisted of five Democrats and one Republican. In 2012, President Barack Obama carried 60 percent of the county’s vote to Republican Mitt Romney’s 36 percent.

We focused on Hannity’s larger point — that the rest of Texas is conservative.

In Hannity’s favor: No Democrat has won statewide since 1994 (when Democrats won five of 10 statewide non-judicial races). Also, no Democratic presidential nominee has captured the state since Jimmy Carter edged Gerald Ford by 129,019 votes in 1976 (a November so long ago that Donald Trump was only 30 and and Hillary Clinton had just turned 29). 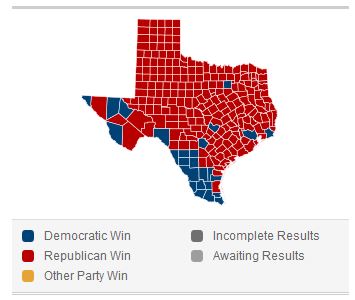 But contrary to Hannity’s statement, Austin wasn’t the only blue dot on the 2012 map. Obama won much of the traditionally stalwart-Democratic border region including El Paso County plus the urban counties of Bexar (home to San Antonio); Dallas; Harris (home to Democrat-dominant Houston); and Jefferson (home to union-strong Beaumont). 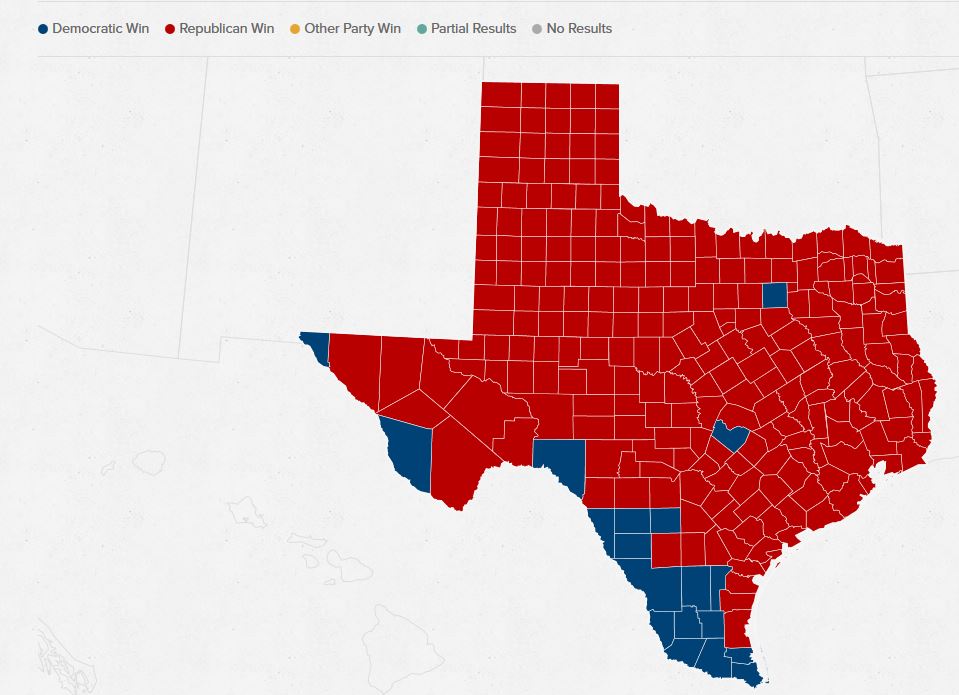 Otherwise, meantime, Democrats show some local strengths--and not only in Austin or near Mexico.

As of August 2016, when Hannity spoke, Dallas County’s judge (the county’s top executive position) was Democrat Clay Jenkins while five other countywide officeholders, including Sheriff Lupe Valdez, were Democrats, per the county’s Democratic Party. District Attorney Susan Hawk was the sole Republican in a countywide elected post.

In contrast, neighboring Tarrant County, home to Fort Worth, remained a Republican stronghold; by our count, per a county Republican Party list, Republicans held all six countywide elected posts. Also, the state’s most-populous county, Harris, had just one Democrat in a major countywide post--Vince Ryan, the county attorney. Ryan won re-election in 2012 along with another Democrat, Sheriff Adrian Garcia. Garcia resigned in 2015 to bid for mayor and he was replaced with a Republican, Ron Hickman, who seeks re-election in November 2016.

We also asked the state parties to assess Hannity’s claim, which by email Mike Joyce of the Republican Party of Texas called "fair."

Manny Garcia of the Texas Democratic Party noted Democratic gains in some parts of the state and pointed out that when Texas voters participating in a June 2016 University of Texas poll were asked to place themselves on a seven-point scale running from extremely liberal to extremely conservative, 39 percent chose "in the middle." Otherwise, 18 percent self-identified as liberal, 44 percent as conservative.

Hannity said: "All of Texas is conservative except a little bit of Austin."

If Hannity had solely singled out the state's many rural and suburban counties, he'd have a point. However, the state’s border counties and biggest cities (not just Austin) lean Democratic while the UT poll showed the majority of all voters self-identify as something other than conservative.

We find this "all" claim False.