Hillary Clinton
stated on February 12, 2016 in a column posted on Medium.com:
Says she will "work to raise the federal minimum wage back to the highest level it’s ever been — $12 an hour in today’s dollars."

Calls to raise the minimum wage -- something that hasn’t been done in seven years -- are a staple of many Democratic campaigns. Hillary Clinton’s presidential bid is no exception.

In a Feb. 12 Medium post, Clinton wrote, "As president, I will work to raise the federal minimum wage back to the highest level it’s ever been  —  $12 an hour in today’s dollars  —  and support state and local efforts to go even further." 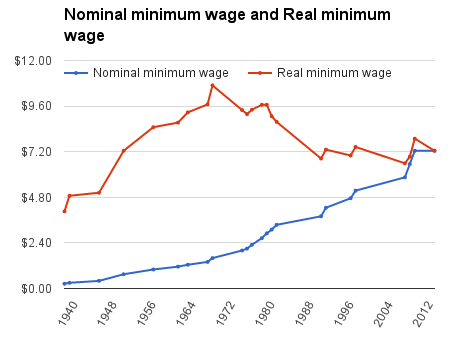 So Clinton’s $12 minimum wage actually would go beyond restoring, or bringing back, the minimum wage to its highest level ever. It would be $1.31 an hour higher in purchasing power than the previous record -- or 12 percent higher.

When we asked the Clinton campaign for an explanation, they pointed to a paper by the Economic Policy Institute, a left-of-center think tank. This paper looked at how the minimum wage compared to the median wage at the time.

According to the paper, in 1968, the minimum wage was about half as high as the median wage at the time -- 52.1 percent. By 2014, that had fallen to 37.1 percent, meaning that wages overall had risen while the minimum wage failed to keep up.

Looking ahead to a proposed $12 minimum wage, the paper estimated that raising the minimum wage that high would bring the ratio back up to between 49.9 percent and 54.1 percent, or roughly what it was in 1968. And it found similar results when using a different benchmark -- the average hourly earnings of nonsupervisory production workers.

Economists we checked with thought this was a credible standard for Clinton to use, and using this statistic supports her overall point. Indeed, Clinton would have been correct if she’d said she would work to raise the federal minimum wage back to where it was in comparison to the median wage at its historical record.

But outside the economics department lounge, that’s a much bigger mouthful than saying she’d bring the minimum wage "back to the highest level it’s ever been — $12 an hour in today’s dollars."

The problem for Clinton’s streamlined phrasing is that it oversimplifies in a way that could give readers a misleading impression. The term "today’s dollars" usually means "inflation-adjusted," and using the inflation-adjusted minimum wage, she’s wrong that a $12 minimum wage has historical precedent.

Clinton said she will "work to raise the federal minimum wage back to the highest level it’s ever been — $12 an hour in today’s dollars."

The minimum wage has never previously been "$12 an hour in today’s dollars" -- it’s gone as high as $10.69 an hour. However, Clinton has a point using other economic data. The data suggests that a $12 minimum wage would be similar to the 1968 wage when compared to median wages at the time.

Clinton’s statement is partially accurate but leaves out important details, so we rate it Half True.

Email interview with Dean Baker, economist with the Center for Economic and Policy Research, Feb. 16, 2016