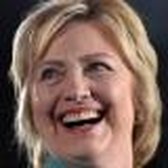 Hillary Clinton was the 2016 Democratic nominee for president. She served as U.S. Secretary of State during the first four years of the Obama administration. She is formerly a U.S. senator from New York, first elected in 2000. She was a candidate for president in 2008. She previously served as first lady when her husband, Bill Clinton, served two terms as president. She was born in Chicago in 1947, graduated from Wellesley College and earned a law degree at Yale Law School. She and her husband have one daughter.