Carly Fiorina
stated on January 20, 2016 in an Iowa Right to Life event in Des Moines:
The United States has a "record number of abortions year after year after year."

Carly Fiorina may be a former CEO, but her campaign hasn’t been all about business and economics. Fiorina has made abortion one of her top issues, most notably referencing a controversial anti-abortion video during a Republican debate. (We rated her claim on the video Mostly False.)

On Jan. 20, 2016, at an Iowa Right to Life event in Des Moines, she cited a statistic sure to trouble her audience, among others.

There are two data sets for tracking abortions over the long term. One is compiled by the federal Centers for Disease Control and Prevention, and the other is compiled by the Guttmacher Institute, a nonprofit that promotes reproductive health and abortion rights. The data from the CDC is current through 2012, while the Guttmacher data -- which includes information for a few states not captured in the CDC data -- is current through 2011.

Both groups’ data show the same general pattern -- a small but steady decline in abortion since the early 1980s.

In plain figures, there were 1.6 million recorded abortions in 1990 compared to a little over 1 million in 2011. 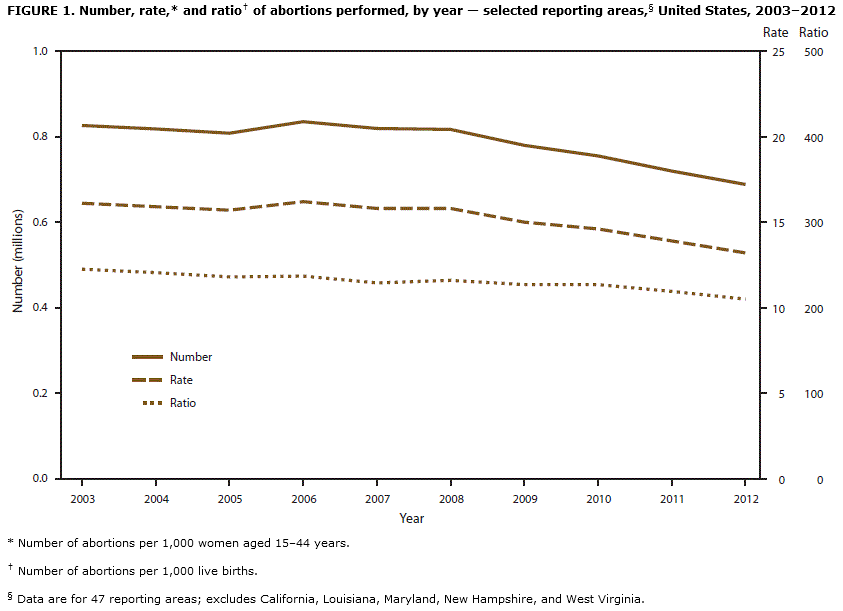 The Guttmacher data shows a similar trend. Here’s the decline in the abortion rate and the abortion ratio going back to 1973, when the Supreme Court legalized abortion nationally in the case Roe vs. Wade.

It’s worth noting that this second pair of charts doesn’t come from an abortion-rights advocacy group. It was disseminated by the National Right to Life Coalition.

"After reaching a high of over 1.6 million in 1990, the number of abortions performed annually in the U.S. (has) dropped to around 1.06 million a year," the National Right to Life Coalition wrote in its fact sheet, adding, "By 2011, the (abortion) rate had dropped to 16.9, nearly half the peak rate, meaning abortion was a significantly less common feature in women’s lives in 2011 than it was in 1980."

And Rebecca Wind, a spokeswoman for the Guttmacher Institute, told PolitiFact that "we have no reason to believe that the long-term decline has reversed itself in recent years."

We should note that even though the abortion rate has decreased, the annual number of abortions is still significant -- 1,058,500 in 2011, according to Guttmacher, the higher of the two estimates.

Fiorina said the United States has a "record number of abortions year after year after year." In reality, the raw number, the rate and the ratio of abortions compared to live births has been falling since the early 1980s, and the decline shows no signs of stopping. We rate Fiorina’s statement False.