Daily Mail
stated on June 24, 2016 in a headline:
"Google search spike suggests many people don’t know why they voted for Brexit."

One of the punch lines in the Brexit vote fallout has been that people in the United Kingdom didn’t even know they were voting to leave the European Union.

The evidence came from Google. News stories and Facebook posts pointed out that searches in the UK on basic questions like "what is the EU?" and "what does it mean to leave the EU?" spiked after the Brexit vote.

Daily Mail, a daily British tabloid, posted an article with the headline: "Google search spike suggests many people don’t know why they voted for Brexit." The paper pointed to a spike in the query "what happens if we leave the EU," as evidence voters were unaware they voted to leave.

The Washington Post also posted an article on the trend implying that voters in the United Kingdom didn’t know exactly what they were voting for.

Even John Oliver poked fun at the trend on HBO’s Last Week Tonight.

"It’s frankly hard not to think that some Britons may not have fully thought this through," Oliver said "Especially when you look at some of the top search terms concerning the EU the next day."

But the Google Trends don’t show that at all, in reality. Here’s why.

What Google Trends tells us (and doesn’t)

Google Trends launched 10 years ago as a way to allow users to track the popularity of a search item in relation to an event. The search data categorizes searches into related groups and then measures the interest in a particular topic across searches from around the world, right down to cities.

For example, these were the top five questions in the United Kingdom on Google Trends after the Brexit vote on June 23. The queries represent the most-searched items relating to the European Union. 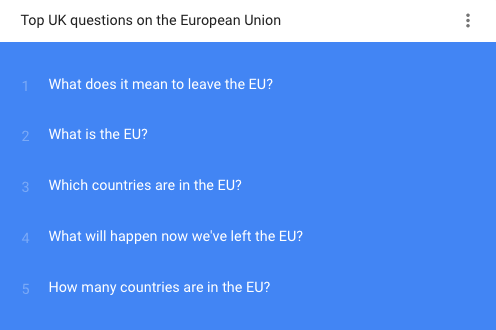 What Google Trends doesn’t tell us is who is actually doing the searching. So there’s no way to tell if the searches were done by Brexit voters.

Another issue is the significance of the searches in comparison to other factors. A 250 percent spike doesn’t mean much if not many people were searching "what happens if we leave the EU?" prior to the report.

The number of searches before the vote is hard to determine

"The problem with Google Trends is that it's essentially a black box," said Pete Meyers, a marketing scientist at Moz which sells marketing analytics software subscriptions. "There's a lot we don't know about what goes into the number, and everything is relative."

For instance, when you look at "What is the EU," on Google Trends, you see a spike. But when you add the term "Brexit" to the same graph the spike seems far less severe, he said. Although the raw totals of searches are not shown, the Trends data shows searches for "Brexit" were much higher than "What is the EU?" on June 24, the day after the vote. 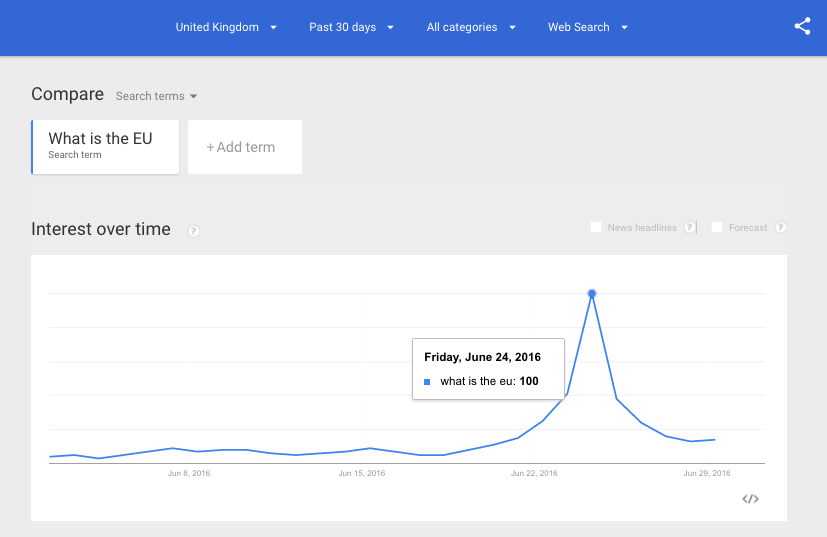 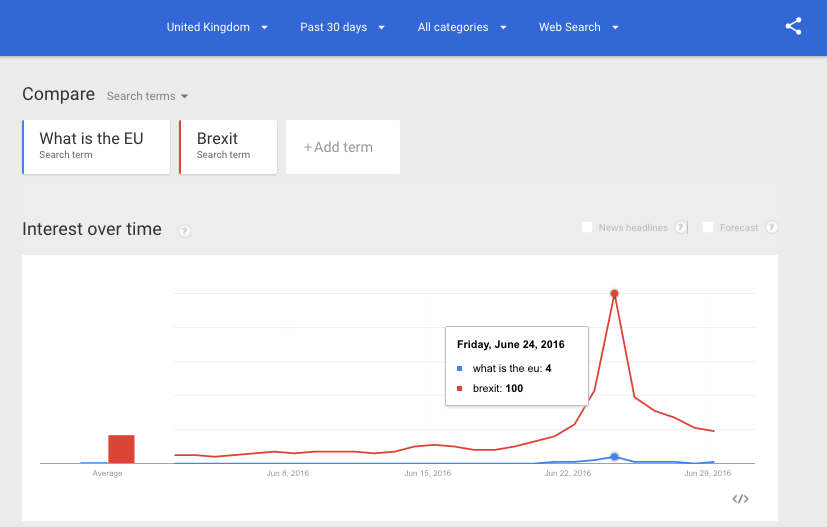 Google Trends looks at a random sample of all searches, so you don’t see the total number of specific searches. The numbers on the chart represent a probability of how highly searched a query is, ranked from 1 to 100. This allows Google to compare two terms against one another.

The volume of searches can be a self-fulfilling prophecy, Meyers said.

"If Google reports that a lot of people are searching for ‘What is the EU?’ and then the press picks it up, curiosity leads people to run similar searches to see what the fuss is about," Meyers said.

He said he can’t prove that’s what happened here, but it has happened in the past.

Another major flaw in using Google Trends to make bold pronouncements like the Daily Mail is that the most common way to search something is usually the term that shows up at the top, said Marti Hearst, a professor for the University of California at Berkeley’s school of Electrical Engineering and Computer Sciences.

"Only the most common (and therefore the most ignorant-sounding) search queries will make it to the top," Hearst said.

In other words, nuance questions like, "How does Northumberland elected representative to the EU support our interests," would not surface to the top, she said.

Experts agreed that the way many news outlets used the Google Trends reports is not grounded in science.

"The numbers shown to the public are processed in many ways and are meant to be very general trends only," Hearst said.

The claims that publications are making go too far, said Tom Davenport, the President’s Distinguished Professor of Information Technology and Management at Babson College.

"I might interpret the findings more positively," Davenport said. "At least a lot of people have curiosity and are trying to learn more about the Brexit topic."

Like other media accounts, the Daily Mail headline said "Google search spike suggests many people don’t know why they voted for Brexit."

This is misleading. It’s impossible to say if UK voters were the ones doing these searches, and the numbers of searches are hard to determine. Relative to searches for "Brexit," searches about "what is the EU" were far less common.

We know people searched "What is the EU" and "What will happen if we leave the EU," but we don’t know why or how many. Point being, there’s no evidence to fill those gaps.

Washington Post, "The British are frantically Googling what the E.U. is, hours after voting to leave it," June 24, 2016

Email interview, Marti Hearst, professor for the University of California at Berkeley’s school of Electrical Engineering and Computer Sciences, June 30, 2016