Michelle Obama
stated on July 25, 2016 in a speech at the Democratic National Convention in Philadelphia:
"I wake up every morning in a house (the White House) that was built by slaves."

During her speech at the Democratic National Convention in Philadelphia, Michelle Obama, took a not-so-veiled shot at Donald Trump and his theme, "Make America Great Again." She did this by citing her own residence for the past eight years as an example of how far her country had come.

"I wake up every morning in a house that was built by slaves," she said. "And I watch my daughters, two beautiful, intelligent, black young women, playing with their dogs on the White House lawn. And because of Hillary Clinton, my daughters and all our sons and daughters now take for granted that a woman can be president of the United States. So, don't let anyone ever tell you that this country isn't great, that somehow we need to make it great again, because this right now is the greatest country on Earth."

We have previously checked whether the building at the opposite end of Pennsylvania Avenue, the U.S. Capitol, was built by slaves. We rated it True.

Here, we’ll take a look at whether the first lady was correct that the White House "was built by slaves."

The White House Historical Association -- a private preservation and educational group for the presidential residence complex -- has a web page devoted to the question, "Did slaves build the White House?"

It reads in part: "Construction on the president's house began in 1792 in Washington, D.C., a new capital situated in a sparsely settled region far from a major population center. The decision to place the capital on land ceded by two slave states -- Virginia and Maryland -- ultimately influenced the acquisition of laborers to construct its public buildings.

"The D.C. commissioners, charged by Congress with building the new city under the direction of the president, initially planned to import workers from Europe to meet their labor needs. However, response to recruitment was dismal and soon they turned to African American(s) — enslaved and free — to provide the bulk of labor that built the White House, the United States Capitol, and other early government buildings."

A stonemason, Collen Williamson, "trained enslaved people on the spot at the government's quarry at Aquia, Va.," the group wrote. "Enslaved people quarried and cut the rough stone that was later dressed and laid by Scottish masons to erect the walls of the president's house. The slaves joined a workforce that included local white laborers and artisans from Maryland and Virginia, as well as immigrants from Ireland, Scotland, and other European nations." 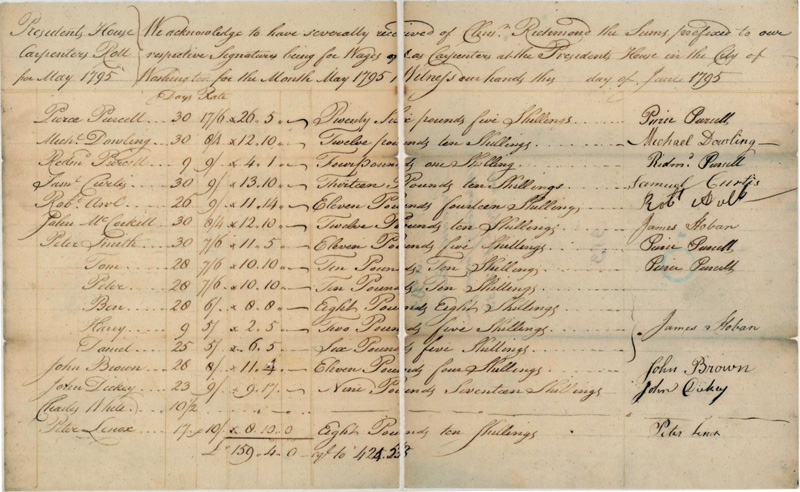 These payroll records show that the government did not own slaves, but that it did hire them. Slave carpenters Ben, Daniel, and Peter were noted as being owned by James Hoban. (National Archives and Records Administration/White House Historical Association)

Journalist Jesse J. Holland also discussed the role of slaves in building the White House in his 2016 book, The Invisibles: The Untold Story of African American Slaves in the White House.

"With the invention of steam shovels still several years away, these slaves dug for the clay on site with hand shovels, working day and night to get the raw material to the skilled brick makers and at the same time, opening up ground on the site for the space that would become the White House’s foundation and cellar," Holland wrote. The identity of these slaves and where they came from has been lost, he wrote.

Politifact Rating:
True
"I wake up every morning in a house (the White House) that was built by slaves."
Michelle Obama
First Lady

Jesse J. Holland, The Invisibles: The Untold Story of African American Slaves in the White House, 2016