Barack Obama
stated on July 27, 2016 in a speech at the Democratic National Convention:
"Illegal immigration and the crime rate are as low as they’ve been in decades."

In his keynote speech on the third night of the Democratic convention, President Barack Obama devoted time to attacking Republican nominee Donald Trump, saying that the candidate promising to "Make America Great Again" is living in a country that is already great.

"Ronald Reagan called America 'a shining city on a hill,' " Obama said. "Donald Trump calls it 'a divided crime scene' that only he can fix. It doesn’t matter to him that illegal immigration and the crime rate are as low as they’ve been in decades, because he’s not offering any real solutions to those issues. He’s just offering slogans, and he’s offering fear. He’s betting that if he scares enough people, he might score just enough votes to win this election."

Trump did, in fact, call the United States "a divided crime scene" in a tweet. But for this fact-check, we're going to focus on Obama's claim about illegal immigration and crime.

There is no reliable count of illegal immigration. Obviously, people coming into the United States illegally are trying to avoid detection.

The best indicator available is the number of people apprehended by the U.S. Border Patrol, an imperfect metric because some people can be double-counted if they are apprehended twice, for example.

Those data show a mostly steady decline to 337,117 apprehensions in the 2015 fiscal year. In contrast, apprehensions peaked in 2000, when more than 1.6 million were logged.

To see a lower nationwide apprehension rate you would have to go back 44 years, to 1971.

(The vast majority of those apprehensions in 2015 — 98 percent — were along the southwest border.)

Another important caveat to note is that rates don't necessarily equate to enforcement, which has gotten stricter in recent years. Also, the number of people attempting to cross is tied to economic conditions, which aren't always under control of a president.

Contrary to what Trump has repeatedly contended, the crime rate in the United States has been on the decline for years.

There's been some preliminary data from early 2015 and partial comparisons as late as early 2016 indicating an uptick, but the overall trend through 2014 from annual data compiled by the FBI — using reports submitted by local law enforcement agencies — show that violent crime has been falling steadily since the early 1990s. 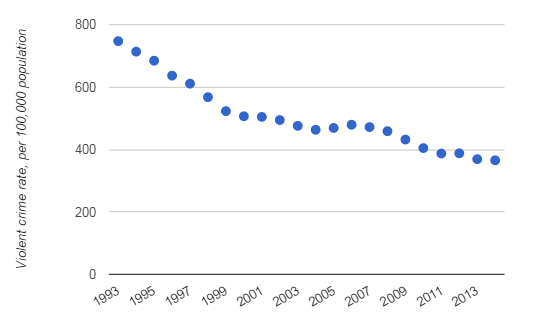 The trend for property crime is similar. In addition, annual statistics collected by the Justice Department for the National Crime Victimization Survey shows the same trends.

Obama said, "Illegal immigration and the crime rate are as low as they’ve been in decades."

The data generally support his claim, but the numbers aren't perfect.

There's a hint of a recent uptick in crime based on partial and preliminary data from 2015 and 2016, and estimates of illegal immigration have to rely on border patrol apprehensions because it's impossible to directly count the number of people sneaking into the United States.

With those words of caution in mind, we rate Obama's claim Mostly True.