Donald Trump
stated on November 1, 2016 in a speech:
"In many instances, (people's) health care costs are more than their mortgage costs or their rent, which, by the way, is a first in American history."

Health care was the theme of a Donald Trump rally Nov. 1 in Valley Forge, Pa., so it was not surprising that Trump focused on the projected price increases in policies offered under the Affordable Care Act, also known as Obamacare.

"People all across the country are devastated. In many instances, their health care costs are more than their mortgage costs or their rent which, by the way, is a first in American history," Trump said. "This is particularly unfair to millennials and younger Americans generally who will be totally crushed by these massive health care costs before they even get started on their journey through life."

We know health care costs have been going up relentlessly, even before Obamacare, and we also know that housing costs, which once made up about one quarter of a household's expenses, have been eating up a larger share of the family budget. So we wondered if Trump's characterization of the relative costs over time was accurate.

The Trump campaign didn't get back to us when we asked for the source of the candidate's claim. So we asked some experts. Most pointed us to the Bureau of Labor Statistics' Consumer Expenditure Survey, which has been tracking Americans' expenses since 1984. That's the data we'll use.

But it's more complicated than that. A lot of extra costs are packed into the housing costs — more than just mortgage and rent bills — and a lot of costs aren't included in the health care number. Here's how the numbers unpack.

Those annual housing costs, which average $18,409, include a lot more than mortgage payments and rent. They also fold in utilities, property taxes, repairs, furnishings, housekeeping supplies, appliances and equipment.

The data don't list total mortgage bills. The BLS does list mortgage interest in charges, so for simplicity we'll focus on that.

For people who own a house, the average yearly interest expense in 2015 was $8,169. (It gets a little complicated because the BLS number had to be adjusted for the fact that about 35 percent of households were made up of owners with a mortgage. In this analysis, we're not including people who own their homes outright.)

Health care costs are even more complicated because many people get at least a portion of their health insurance paid by an employer or the government, and the BLS survey doesn't take that into consideration. If everyone were forced to buy their own health insurance, those costs would make up a lot more than 7.8 percent of the family budget.

Because Trump specifically referred to health care costs, rent and mortgage costs, here's the comparison for 2015:

For recent home buyers and the self-insured under Obamacare, Dean Baker, co-director of the left-leaning Center for Economic Policy and Research in Washington, said it's important to remember that while health costs have been rising, homeowners have been benefiting from "the extraordinarily low mortgage interest rates of the last seven years."

On the other hand, someone buying Obamacare now might find it far more expensive than the mortgage payment set up 20 years ago when housing prices were much lower.

Trump said this is "a first in American history." This, too, is incorrect.

We took the BLS data and calculated the percentage of annual expenses for mortgage interest, rent and health care. Note that the first Obamacare plans sold through the insurance marketplaces took effect in 2014. 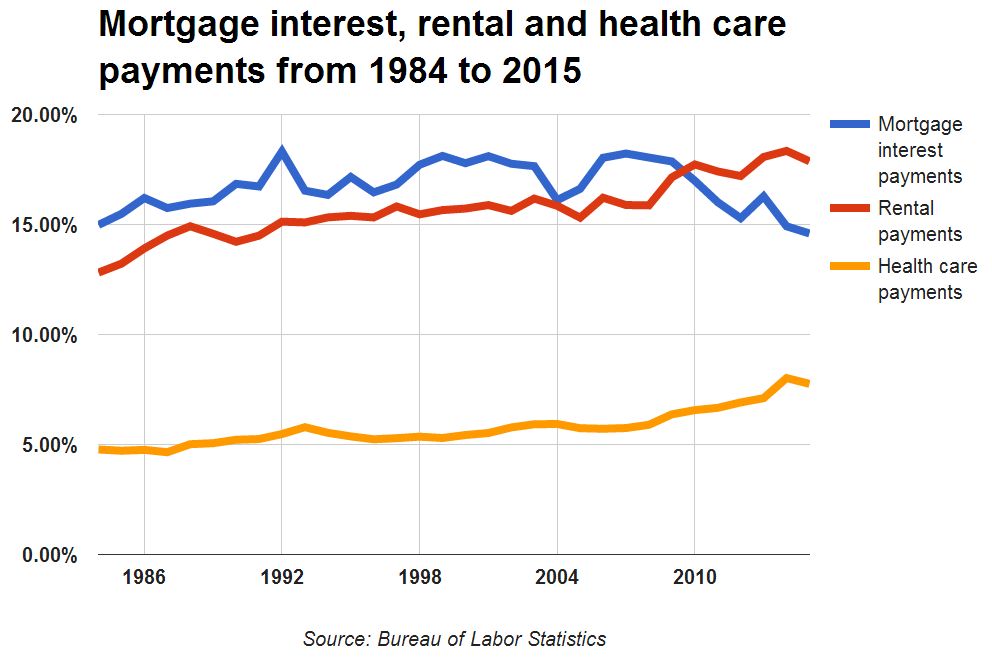 Out-of-pocket health care costs have been rising, according to the BLS data, but they're not close to converging, even though prices have been rising steadily as premiums have gone up, deductibles and co-pays have increased, and employers have shifted more of those rising costs to their workers.

From a broader perspective, and one that includes government and employee costs for health care, data from the Bureau of Economic Analysis show that the United States is now spending significantly more on health care ($2.6 trillion in 2015) than on housing ($1.9 trillion).

"The aggregate health care consumption numbers have been higher than aggregate housing expenditures for a number of years now," said Jeffrey Clemens, a professor of health economics at the University of California San Diego.

Trump said, "In many instances, (people's) health care costs are more than their mortgage costs or their rent, which, by the way, is a first in American history."

This is a bit of an apples-and-oranges comparison. He is comparing total health care costs but not total housing costs, looking at only mortgage and rental costs. To further complicate matters, per-person health care costs far more than what most households pay because many get their health insurance subsidized by employers or the government.

With those caveats in mind, the federal data show Trump is, on average, incorrect.

But the candidate fudged it a bit, and given individual circumstances it's certainly possible that some households are, in fact, seeing higher health care bills than what they're paying on their rent and mortgage. So we rate this claim Mostly False.https://www.sharethefacts.co/share/4549f29a-a2e2-49dd-8fff-34d70628f2be