Hillary Clinton
stated on June 2, 2016 in a foreign policy speech :
Says "Donald Trump says climate change is a hoax invented by the Chinese."

During her take-no-prisoners foreign policy speech on June 2, Hillary Clinton reminded listeners of controversial things that Republican presidential rival Donald Trump has said over the years.

At one point, Clinton said, "Donald Trump says climate change is a hoax invented by the Chinese."

Did he? Yes, though he later said it was a joke.

The original source of this claim was a tweet Trump sent on Nov. 6, 2012, as we noted in a January 2016 fact-check of a similar claim by Clinton’s Democratic opponent, Bernie Sanders.

Trump’s tweet said, "The concept of global warming was created by and for the Chinese in order to make U.S. manufacturing non-competitive."

So Clinton certainly has evidence to support her claim. But we should also note that Trump backed off his claim after Sanders noted them in January on NBC’s Meet the Press, calling the Chinese link a "joke."

On Jan. 18, after Sanders had attacked Trump’s climate change views in the Democratic debate, Trump told Fox & Friends, "Well, I think the climate change is just a very, very expensive form of tax. A lot of people are making a lot of money. I know much about climate change. I'd be — received environmental awards. And I often joke that this is done for the benefit of China. Obviously, I joke. But this is done for the benefit of China, because China does not do anything to help climate change. They burn everything you could burn; they couldn't care less. They have very — you know, their standards are nothing. But they — in the meantime, they can undercut us on price. So it's very hard on our business."

Trump may call the mention of China’s role a joke, but he certainly has a lengthy record of using the word "hoax" to describe climate change. (For the record, in 2014 we rated the claim that climate change is a "hoax" Pants on Fire.)

That’s three times using "hoax" in one sentence. Trump has also used the word on Twitter since his 2012 tweet. 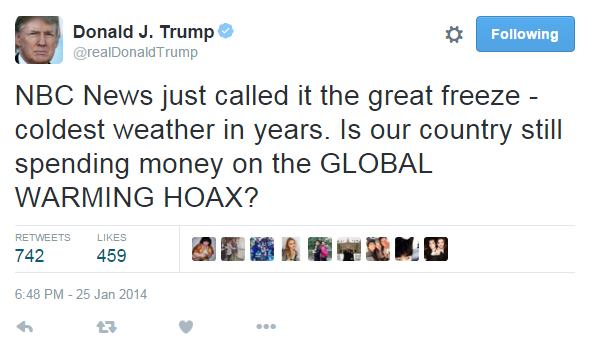 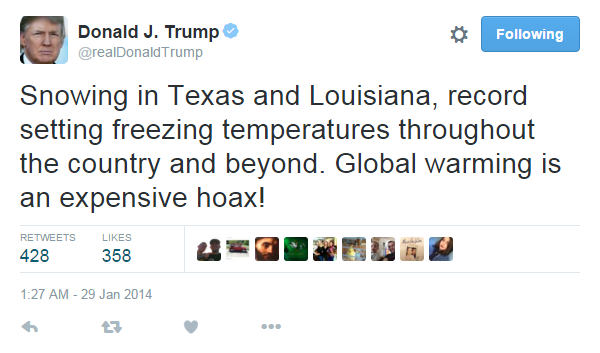 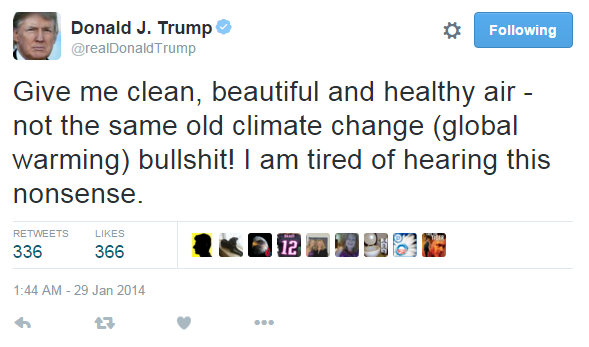 And on Jan. 18, 2016, Trump said that climate change "is done for the benefit of China, because China does not do anything to help climate change."

We didn’t find Trump using the word "hoax" in the months since our previous fact-check, but he hasn’t backed off his aggressive skepticism of climate change and policies designed to alleviate it. In fact, he’s enshrined opposition to climate change efforts as a key part of his platform.

In a high-profile speech on energy policy in North Dakota on May 26, 2016, Trump attacked "draconian climate rules." He advocated rescinding "all the job-destroying Obama executive actions, including the Climate Action Plan" and said he would "cancel the Paris Climate Agreement and stop all payments of U.S. tax dollars to U.N. global warming programs."

"President Obama entered the United States into the Paris Climate Accords unilaterally and without the permission of Congress," Trump said. "This agreement gives foreign bureaucrats control over how much energy we use right here in America."

Trump did tweet that view in 2012, though he made efforts earlier this year to describe that remark as a "joke."

However, Trump has repeatedly called climate change a "hoax" in speeches, tweets and media appearances, and while he hasn’t necessarily repeated the charge that China "invented" climate change, he has said as recently as Jan. 18, 2016, that action on climate change "is done for the benefit of China."

Mother Jones, "13 Tweets That Definitively Prove That Donald Trump Is Not a Scientist; The reality TV star has a long history of firing the facts," June 16, 2015

Business Insider, "TRUMP: I was joking when I said the Chinese 'created' the concept of climate change," Jan. 18, 2016

Daily Mail, "Trump insists it was a 'joke' when he claimed the Chinese invented global warming," Jan. 18, 2016