As you’re texting away on that snazzy smartphone, you may be "holding war" in your hands, says actress and activist Robin Wright.

Wright, known for her roles in House of Cards, Forrest Gump, and The Princess Bride, compared minerals extracted in the Democratic Republic of Congo for electronics to blood diamonds in a recent speech and urged consumers to learn more about their electronics.

Are the vast majority of Apple and Intel products made without financing war in the Democratic Republic of Congo?

The answer is complicated. While both Apple and Intel are commended by human rights groups for their leadership in transparency, Wright’s numbers are off. More importantly, experts told us it’s impossible to ensure that anything is completely conflict-free.

The Democratic Republic of Congo’s rich mineral deposits, worth about $24 trillion, supply the world’s demand for electronics and fund militias that have been warring with each other and the government for decades.

Rebel groups like the Lord’s Resistance Army (remember Kony?) and the Congolese military itself loot or seize control of mines in the Kivu region. These mines are notorious for their rampant human rights abuses.

The minerals eventually find their way into cell phones, computers, and other products. Armed groups earned an estimated $184 million from just four minerals in 2008 alone. Here’s a video from Enough Project, a human rights group, on how it all works:

Wright may have been thinking of figures in Apple’s and Intel’s filings to the Securities and Exchange Commission, but she misstated a few things.

As part of the 2010 Dodd-Frank Act, publically traded companies are required disclose use of conflict minerals — specifically tin, tantalum, tungsten and gold — annually to the SEC.

In 2014, Apple reported 88 percent of its smelters and refineries were verified as conflict-free or participating in third-party auditing programs. That same year, Intel said 100 percent of microprocessors and chipsets were conflict-free, but it couldn’t determine if the label applied to other products.

Here’s a chart showing how the two stack up next to other companies:

*Apple rejects the label conflict-free
**No 2015 report was available; numbers taken from 2014 report. Google and its subsidiary, Motorola, also did not report number of firms participating in audits.
***SanDisk was unable to determine whether their any of their products included conflict minerals or were conflict-free.

But experts told us participating in audits or even being deemed in compliance doesn’t guarantee that the minerals are actually conflict-free for several reasons.

"Our position is companies should not be allowed to make those types of statements," said Seema Joshi, Amnesty International's Head of Business and Human Rights.

According to Oboth, smelters and refineries receive verification based on their capacity to do due diligence (i.e. chain of custody documentation and proof of insurance), not whether they’ve taken the steps to ensure their supplies were actually mined humanely.

The auditing regiment is currenting being revised, Oboth said, "but for the time being, there’s no oversight on whether they’re negating risks." And while Global Witness commended Apple for its decision to reject the "conflict-free," Oboth said it and Intel could be doing more. 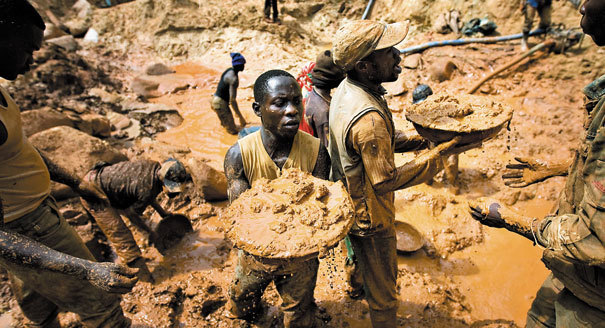 There are few means to verify in the conflict-ridden eastern part of the country where many mines are located. Beyond issues of accessibility, miners and the armed groups have found ways of circumventing the system.

The majority of minerals are being smuggled into neighboring countries with higher profit margins and much less rigorous certification methods, if they exist at all, Seay told us. ITR, a tin auditing firm, prices a kilo of tin at $2 while the same amount would fetch $4 or $5 in Rwanda.

"If you can get your minerals, which may or may not be conflict-free, into Rwanda, you can get it labeled conflict-free," she said. "Do you take the $2 or do you hire a boat and go to Rwanda? It’s a no brainer."

And even if the minerals stay in the country, Seay pointed out, the audit system has spurred a cottage industry for conflict-free labels: "You can also buy the tag in the markets in Kigali. All the incentives are set up for people to lie."

Then there’s the question of whether conflict-free labeling actually curbs violence and protects human rights. The evidence is mixed.

Dodd-Frank didn’t work out as planned initially. The Congolese government enacted a temporary ban on mining and companies avoided sourcing from the region altogether.

For one of the poorest countries in the world where mining employs one sixth of its population, Dodd-Frank "set off a chain of events that has has propelled millions of miners and their families deeper into poverty." Meanwhile, there were few signs that it had tempered violence or weakened the militias.

But now that the ban has ended and companies are once again buying from the Democratic Republic of Congo, experts view Dodd-Frank a bit more positively. Seay, an initial critic, says it’s draw attention to the issue.

"It got the attention of the Congolese government in a way that nothing else could have," she said, adding, "A lot of is lip service and a lot of is how much facade we should put up." 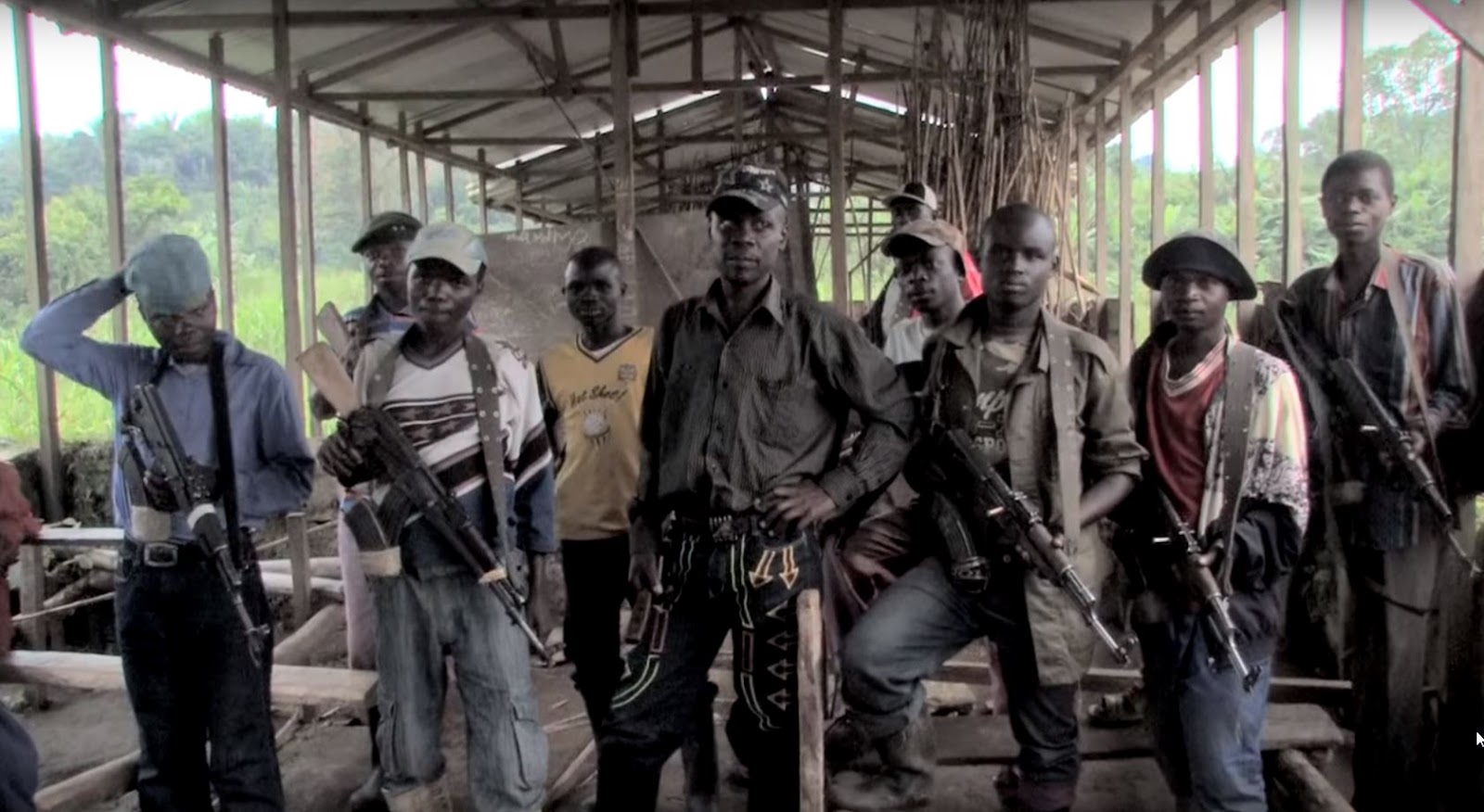 (Screengrab from When Elephants Fight)

A 2015 report by the International Peace Information Search, a development research institute, found that armed groups have been cut off from many tin, tantalum, tungsten mines, but still profit from gold. Seay said they’ve savvied up (i.e. by removing guards with machine guns from the mines) while finding funding sources in border crossings, charcoal, "conflict weed", wildlife smuggling, etc.

The narrow focus of Dodd-Frank also means that "conflict-free" isn’t the same thing as abuse-free. Amnesty has documented child labor in the DRC’s production of cobalt, which is not designated as a "conflict mineral." Global Witness found lapis lazuli funds the Taliban, but Dodd-Frank doesn’t apply because the mines are in Afghanistan.

"You can have a completely clean mine, as designated by Dodd-Frank, with child laborers and where woman are trading sex with the pit bosses in order to sell lunch around the periphery," Seay said. "There’s no such thing as 100 percent conflict-free anything."

The numbers are off. Intel says 100 percent of is processors are conflict-free, but couldn’t vouch for its other products. Apple reported that 100 percent of its supply chain was participating in audits, but rejected the label.

While experts commend both companies for leading the sector in moving away from conflict minerals, they cautioned against labeling anything 100 percent "conflict-free."

The Rockefeller Foundation, "'Making Noise': Robin Wright and the Path Towards Global Equality | Insight Dialogues," May 25, 2016

Oxford Policy Management, "The impact of mining in the Democratic Republic of Congo," Oct. 2013

Global Witness, "WAR IN THE TREASURY OF THE PEOPLE: AFGHANISTAN, LAPIS LAZULI AND THE BATTLE FOR MINERAL WEALTH," June 5, 2016