Jerry Brown
stated on January 24, 2017 in his State of the State address:
"One hundred and ninety-four countries signed the Paris Agreement to control greenhouse gases. Our own voluntary agreement to accomplish the same goal — the Under2  MOU — has 165 signatories, representing a billion people."

California Gov. Jerry Brown offered an energetic rebuke to the Trump administration’s "alternative facts" and "blatant attacks on science" in his State of the State address.

The solidly blue state voted overwhelmingly for Hillary Clinton, prompting Brown to reflect on California’s place in a broader national context in a speech traditionally used to set a state policy agenda. Contrasting Trump’s positions, Brown promised to oppose deportations of undocumented immigrants, to protect health care and to continue to act on climate change.

"One hundred and ninety-four countries signed the Paris Agreement to control greenhouse gases. Our own voluntary agreement to accomplish the same goal — the Under2 MOU — has 165 signatories, representing a billion people," Brown said. "We can do much on our own and we can join with others – other states and provinces and even countries, to stop the dangerous rise in climate pollution. And make no mistake, we are going to do exactly that."

We wanted to know more about what Brown was talking about and if it is accurate.

The Under2 MOU, or Subnational Global Climate Leadership Memorandum of Understanding, is a pact spearheaded by California and the German state of Baden-Württemberg in the leadup to the Paris agreement in 2015. United Nations Secretary-General Ban Ki-moon called it a "game changer."

Its 165 members represent about 1 billion people and pledge to limit carbon emissions to below 80 to 90 percent from 1990 levels with the goal of keeping global temperatures from rising 2 degrees Celsius from pre-industrial levels by 2100.

That’s the same goal and framework of the Paris agreement, the major international deal between nearly 200 nations. But there are a few differences between the two deals.

First, Brown’s numbers need explanation. Of the Under2 MOU’s 165 members, 155 are signatories, meaning they've declared their commitment to limit emissions and to provide action plans. The other 10 are countries that have endorsed the MOU, meaning they support the goal but don’t have to submit plans. 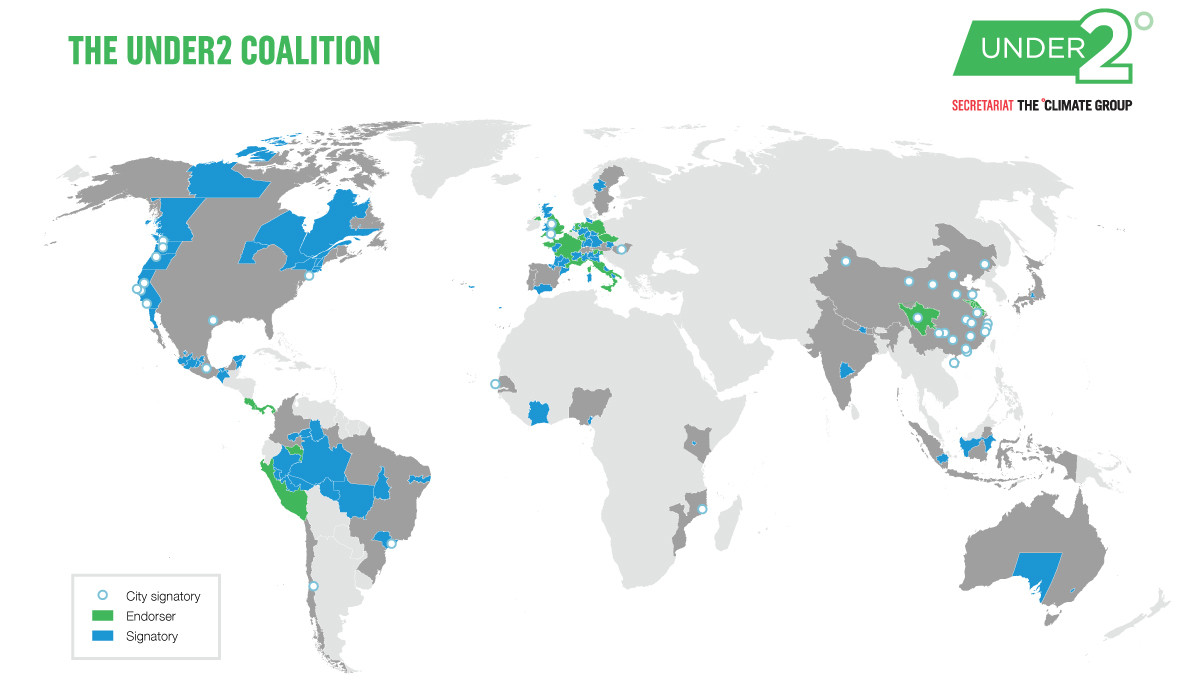 Second, the MOU is voluntary and nonbinding, and while the Paris deal is also voluntary, it includes binding obligations on reporting emissions and progress.

Third, unlike the MOU, the Paris agreement has increasingly stringent targets for signatories. The United States, for example, pledged to cut emissions 17 percent from 2005 levels by 2020, and then 26 to 28 percent percent by 2025 (equivalent to 19 to 24 percent from 1990 levels).

Despite these differences, experts we spoke with said the Under2 MOU was a strong and forceful compact. But they said the MOU was a complement to the Paris agreement rather than its equivalent in terms of potential impact.

"They’re part and parcel to each other. If you’re driving those kind of reductions, those can help you get to the national targets. They’re not distinct realms. They’re nested within each other," said Brendan Guy, the international policy manager at the Natural Resources Defense Council.

Under the MOU, California pledged to reduce emissions 40 percent below 1990 levels by 2030 and actually enacted legislation that codifies the target and sets a regulatory process in place. That’s a "really high watermark" that hardly any national governments have met, said Danny Cullenward, an energy economist at Carnegie Institute for Science.

Experts also pointed to California’s five-year-old cap-and-trade program (which the Obama administration tried but failed to implement on a national scale), extended renewable portfolio standards and its pledge to get 1.5 million zero emissions cars on the road by 2025 as examples of strong climate change action.

Just how far-reaching are these targets and policies? To state the obvious, cities and states do not account for all of a country’s emissions, so their reduction pledges will not have an equivalent impact to a national commitment.

California, despite being the largest state and equivalent to the world’s sixth-largest economy, accounts for 6 to 7 percent of the United States’ emissions. The other nine U.S. states that are part of the MOU (Connecticut, Massachusetts, Minnesota, New Hampshire, New York, Oregon, Rhode Island, Vermont and Washington) represent another 10 percent of the country’s total emissions.

Looking at it another way, if all 23,458 cities from the Energy Department's city energy profile tool enacted best energy-saving practices, it would lead to a 3 to 7 percent reduction in emissions, according to the National Renewable Energy Laboratory.

"Will these subnational efforts be enough to prevent a dangerous increase in average global temperature? Probably not," said Rachel Krause, a University of Kansas professor who focuses on local policy and sustainability. "But they still can have meaningful impact."

Cullenward pointed out that the Paris agreement’s depth is the result of two decades of negotiations, while the MOU is a relatively new compact and will likely become much more sophisticated over time.

"It’s no substitute for eventual national action. But it’s a really appropriate strategy where you have national governments that aren’t interested in taking action on climate change," he said.

Brown said, "194 countries signed the Paris Agreement to control greenhouse gases. Our own voluntary agreement to accomplish the same goal — the Under2 MOU — has 165 signatories, representing a billion people."

The Under2 MOU, spearheaded by California and the Germany state Baden-Württemberg, is a climate change agreement signed by 155 cities and states that have pledged reductions in carbon emissions and endorsed by 10 countries.

While its emissions impact is not as far-reaching as the Paris agreement, experts told us it is a very similar deal that fosters international cooperation on climate change and fills a void in times of national hesitation to act.

Politifact Rating:
"One hundred and ninety-four countries signed the Paris Agreement to control greenhouse gases. Our own voluntary agreement to accomplish the same goal — the Under2 MOU — has 165 signatories, representing a billion people."
Jerry Brown
Governor of California

Email interview with Rachel Krause, professor at the University of Kansas. Jan. 24, 2017

Interview with Ashley Lawson, researcher at the Center for Climate and Energy Solutions, Jan. 25, 2017