Clay Aiken
stated on June 12, 2016 in a posting on Twitter:
"A gay man who survived #orlando hate crime can STILL show up to work in FL tomorrow and have his boss fire him simply because he is gay."

As the motive behind the deadly June 12 shooting at a gay nightclub in Orlando was still being debated, singer Clay Aiken took to Twitter to characterize it as a hate crime and report that gays can be summarily fired in Florida simply because of their sexual orientation.

"A gay man who survived #orlando hate crime can STILL show up to work in FL tomorrow and have his boss fire him simply because he is gay," Aiken tweeted. 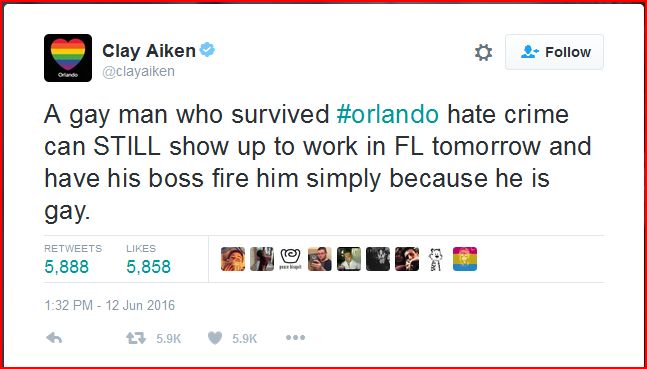 For this fact check, we will look at whether Florida really offers no job protection to gays and lesbians.

The short answer: Aiken is mostly correct when it comes to Florida as a whole, but he's wrong to suggest that there is no protection anywhere in the state.

Federal law does not protect the employment rights of the LGBT community, nor does the state of Florida.

However, thanks to city and county law, members of the LGBT community do have employment protection in some areas of Florida.

Penela also reported that although state law doesn't specifically reference LGBT status in employment, "the Commission will accept some cases under sex-based discrimination.  Allegations of gender identity/transgender discrimination, for example, can be viewed as sex discrimination."

"Regardless of existing employment anti discrimination ordinances protecting LGBT in at least 31 municipalities, covering as many as 15 counties in the state, the state does not provide such protections — leaving LGBT workers in as many as 52 of the 67 counties without any protection from being terminated because of their orientation," Pultz said in an email.

"Clay's comment stated nothing more than that a gay man in Florida can still be fired for being gay. It did not specify any certain municipality and therefore is factually accurate," he wrote.

Aiken tweeted, "A gay man who survived #orlando hate crime can STILL show up to work in FL tomorrow and have his boss fire him simply because he is gay."

That is generally true across the state, because gays and lesbians lack protection from employment discrimination under state law and under federal law. However, 19 Florida cities often offer protection to gay workers, including the city of Orlando. Another 10 counties also offer protections.