"In a speech about policing," Lemon said, "the FBI director, James Comey, borrowed a phrase saying, ‘Everyone is a little bit racist.’ What racial blind spot do you have?"

When it was Sanders’ turn to answer, he began by talking about several specific examples of racial discrimination. He then drew a contrast with what whites experience.

Several readers asked us to take a closer look at Sanders’ comment that "when you're white ... you don't know what it's like to be poor."

Sanders' point was that white people haven’t had to contend with racism based on skin color. But when he moves into the subject of whites’ experience with poverty, he’s on weak ground. Sanders’ suggestion that white Americans haven’t experienced poverty is undercut by statistics calculated by the U.S. Census Bureau.

Since the 1960s, the Census Bureau has tracked the numbers and percentages of Americans by race who have an income level that puts them at the poverty line. Here’s the most recent data, for 2014:

By this measure, Sanders was certainly wrong to suggest that whites haven’t experienced poverty. In 2014, there were actually more white Americans in poverty -- 19.7 million -- than members of any other group.

Part of the reason, of course, is that there are more white Americans than there are members of minority groups overall. (Whites account for 62 percent of the population.) Still, even though whites have a lower poverty rate than other groups -- roughly 10 percent -- even that percentage is hardly trivial.

The numbers are similar if you raise the income level slightly. At 125 percent of the poverty level, the number of white Americans rises to about 26.5 million. That’s a lot of white people who are in or near poverty.

"This was a misstatement. A lot of white people know what it’s like to be poor," said Julia Isaacs, a senior fellow at the Urban Institute.

If you look at the poor as a group, minorities are disproportionately represented. Still, the white population is large enough that the majority of the people in poverty are white. That’s been the case since at least 1970.

We calculated the racial and ethnic makeup of the population at the poverty line in roughly 10-year intervals, using data for the four categories above. Census data is available back to 1990 for all four groups, and they exist for all but Asians back to about 1970.

It’s easiest to grasp the scope of white poverty when using the following graphic, which was provided to us by Christopher Wimer, a research scientist at the Columbia University Population Research Center. It’s similar to the chart above, except that it uses a more precise, though still experimental, measurement of poverty that is adjusted for geography, government benefits and other factors not captured in the traditional poverty measurement.

The share of whites in the population of Americans in poverty is shown in purple. As the chart indicates, the white share has fallen, but it’s still the largest of any of the four groups studied. 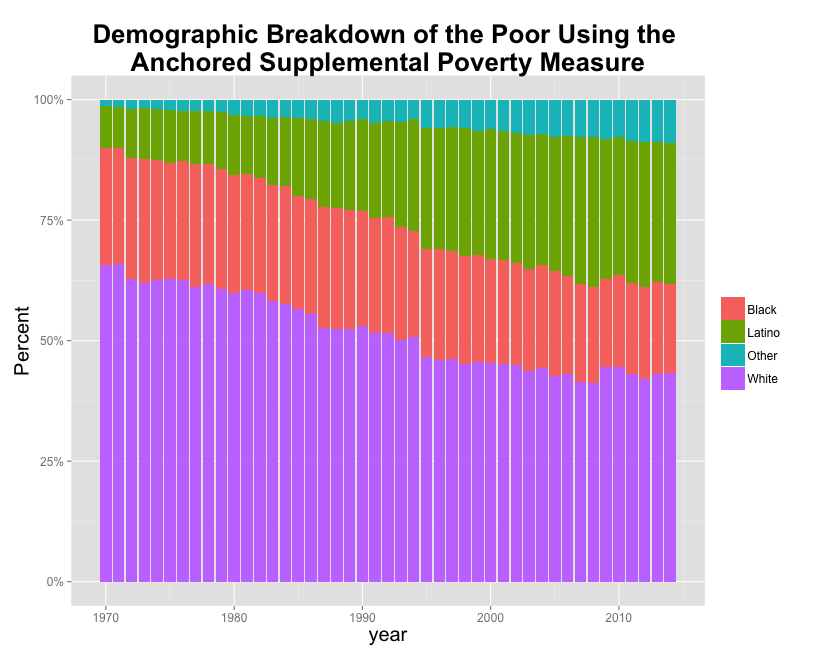 Sanders said the day after the debate that he misspoke, telling reporters, "What I meant to say is when you talk about ghettos traditionally, what you talk about is African-American communities. There is nobody on this campaign … who's talked about poverty, whether it's in the white community, the black community, the Latino community, more than I have."

Sanders says that "when you're white ... you don't know what it's like to be poor." On the contrary -- the most recent figures show that nearly 20 million white Americans are experiencing poverty. While that’s smaller as a percentage than it is for other racial and ethnic groups, that’s still a lot of people. In raw numbers, it’s actually more than any other group. We rate his claim False.

Politifact Rating:
False
"When you're white ... you don't know what it's like to be poor."
Bernie Sanders
Presidential candidate

Transcript of the Democratic presidential debate in Flint, Mich., March 6, 2016

Institute for Research on Poverty, "Who is poor?" accessed March 6, 2016

Email interview with Timothy M. Smeeding, professor of public affairs and economics at the University of Wisconsin, March 7, 2016

Email interview with Julia Isaacs, a senior fellow at the Urban Institute, March 7, 2016