Viral media reports
stated on March 22, 2016 in Newspaper, television and social media:
Emory University students were provided counseling after someone wrote "Trump 2016" in chalk on campus.

Oh, the horrors of the academic life.

The long walks to class, the agony of trying to decide between a skinny latte or an iced espresso caramel macchiato at Starbucks.

Now comes the possibility that someone might actually write a leading presidential contender’s name in chalk in a public place at a highly regarded institution of higher learning.

That happened on a recent Sunday night(or early Monday morning) at Emory University when someone wrote GOP front-runner Donald Trump’s name in chalk across the campus. The "chalking" incident ignited a campus protest where some students expressed "pain" and rabid paranoia in wake of the serial pro-Trump scribblings.

The protesters were immediately pilloried from the right and left as a bunch of coddled whiners. One part of the news stories and viral social media posts caught PolitiFact’s attention. Many of the reports said the offended students were provided counseling to ease their PTSD — Post Trump Scribbling Disorder. 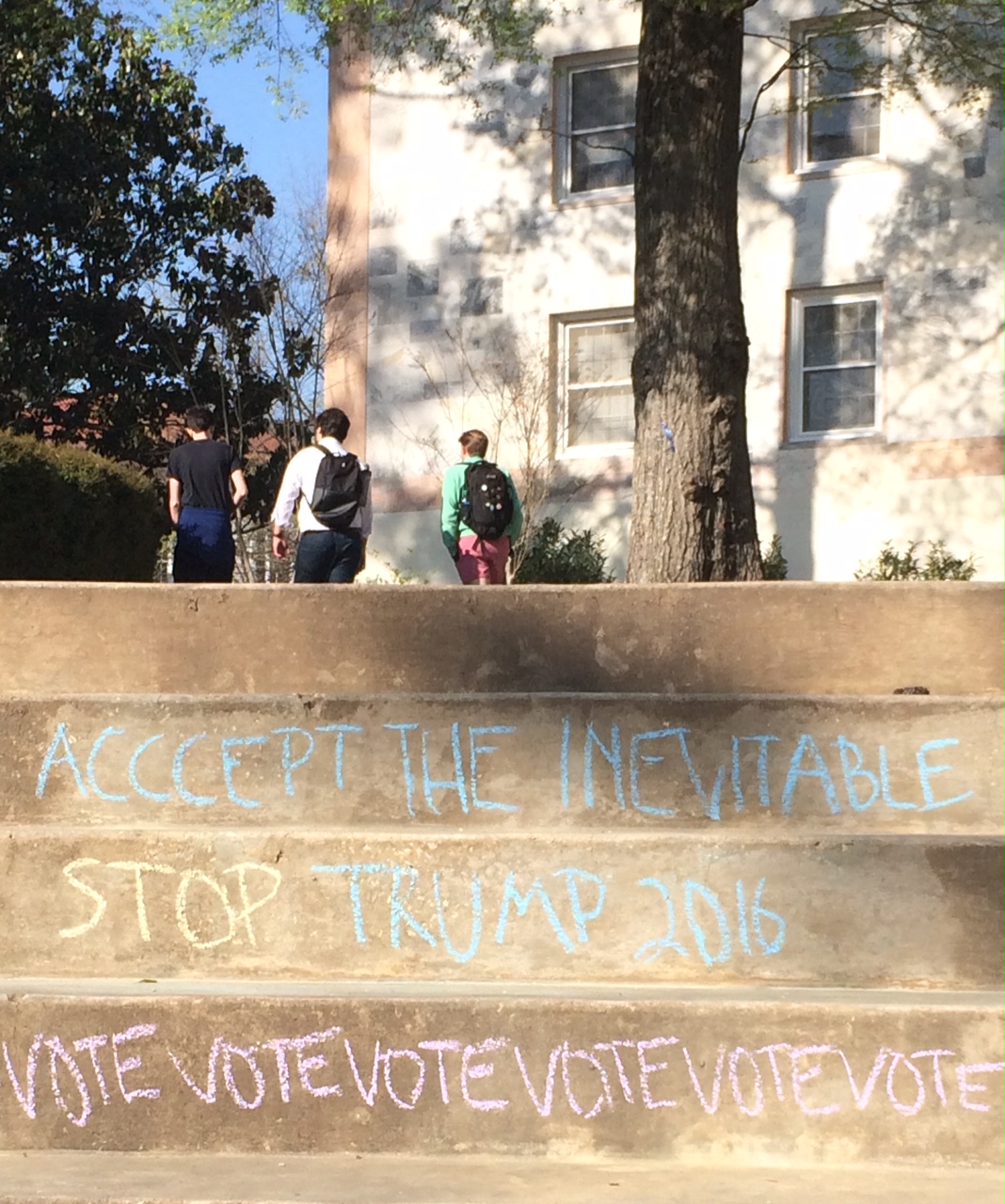 The trouble began when a yet-to-be-identified person(s) wrote pro-Trump slogans in chalk on sidewalks, steps and railings on the campus. Horrified students awoke to the madness and quickly noted Trump’s penchant for the politically controversial. Trump has advocated deporting all illegal immigrants and banning Muslims from entering the U.S.

The student newspaper, The Emory Wheel, reported that about 40 students soon staged a campus protest, at one point shouting to the school’s administration: "You are not listening! Come speak to us, we are in pain!" Then students moved into the administration building calling out: "It is our duty to fight for our freedom. It is our duty to win. We must love each other and support each other. We have nothing to lose but our chains."

Critics saw the incident as political correctness run amok at an institution that is supposed to promote free speech and a diversity of ideas.

The pundits pounced. The story was carried across the globe. Left-leaning comedian Bill Maher said this: "I so badly want to dropkick these kids into a place where there is actual pain and suffering."

Larry Wilmore fired off a brutal Comedy Central segment, complete with a fake Emory student (Justice Davenport) who opined: "I had no idea I went to school with people who had different opinions from me. It’s terrifying."

Newspapers, network television and social media joined the beat-down, many asserting that counseling was being offered to soothe the bruised psyches of the offended students.

But that part of the story is off base, Emory spokeswoman Elaine Justice said.

"Emory University did not offer counseling to students as a result of the incident and subsequent controversy," Justice said in an email.

Part of the counseling confusion comes from a March 22 email sent to students.

The email refers to "emergency funds" offered "for student groups seeking to respond to the incident."

But those funds were not for counseling, Justice said. Snopes.com ruled as "false" one report that Emory provided "emergency counseling."

But Justice also added this: "As is the case at every university, counseling is routinely available to all students in whatever circumstances they are experiencing."

Did any Emory student seek that routinely available counseling as a result of the chalkings? Justice said she did not know.

Various media outlets reported that counseling was specifically offered to Emory students upset over the fact that someone chalked pro-Trump messages on campus.

But no funds were provided for any kind of emergency counseling due to the incident.

Counseling is routinely provided to Emory students upon request. But there was no organized effort to counsel students due to this specific incident.

The university cannot confirm whether any individual students sought routine counseling as a result of the chalkings. And that does create a bit of uncertainty in the dust-up over the Trump chalkings and their aftermath.

Various media reports 2
stated on November 10, 2016 news media reports:
Newt Gingrich has been a proponent of selecting a president by popular vote instead of the Electoral College.

Newt Gingrich
stated on September 19, 2016 in a Facebook post and video:
Hillary Clinton said, "with a straight face, that the terrorist attacks this weekend were caused by Donald J. Trump"

Jim Barksdale
stated on September 15, 2016 On his campaign website:
In Georgia, women earn 82 cents for every dollar earned by men.

Jimmy Carter
stated on August 22, 2016 interview with an AP reporter in Memphis:
Both the Democratic and Republican candidates for president in 2016 are "quite unpopular."

Allen Buckley
stated on July 13, 2016 a campaign statement:
"U.S. Sen. Johnny Isakson has voted for $7 trillion of our national debt!"

Georgians for Bernie Sanders for President
stated on May 23, 2016 Facebook post.:
Polls show Bernie Sanders would do better than Hillary Clinton in a head-to-head battle against Donald Trump.

Video for Atlanta Super Bowl bid presentation
stated on May 24, 2016 Super Bowl bid:
"Our population has grown from about 1 million in the 1970s to almost 7 million today."

Vernon Keenan
stated on April 26, 2016 Newspaper interview :
The city of Clarkston "can’t decriminalize marijuana. Only state legislators and Congress can do that."

Romney allies
stated on March 18, 2016 The New York Times:
Mitt Romney did not "endorse" Ted Cruz, even though he said he is voting for Cruz and urged others to do likewise.

Donald Trump
stated on March 13, 2016 Donald Trump on Sunday, March 13th, 2016, in an interview on "Meet the Press":
Says a YouTube video shows Thomas DiMassimo, the man who rushed Trump at an Ohio rally, "dragging the American flag on the ground like it was a piece of garbage."

Viral BuzzFeed
stated on April 20, 2015 video:
Women make only 78 percent of what men make for the same job.

Jimmy Carter
stated on March 24, 2014 Television interview :
Women in the U.S. get 23 percent less pay than men for the same exact work.