Bernie Sanders
stated on May 1, 2016 in an interview on CBS News' "Face the Nation":
Winning enough pledged delegates is "not impossible."

With less than 20 primaries and caucuses left in the Democratic nomination race, Hillary Clinton has about 290 more pledged delegates than her rival Bernie Sanders. To close that gap and beat her outright, the simple numbers say Sanders has to win about 65 percent of the remaining delegates.

The host of CBS News’ Face the Nation, John Dickerson, pressed Sanders on his odds of pulling that off.

"To get there, many analysts who look at the pledged delegates just say, it's mathematically impossible," Dickerson said on May 1, 2016. "Are they wrong?"

"It's difficult," Sanders said. "It's not impossible."

So is it possible? Or impossible?

Seasoned primary watcher Alan Abramowitz at Emory University said Sanders had a point -- albeit, a limited one.

"Of course it’s mathematically possible for him to win 65 percent of the remaining pledged delegates," Abramowitz said, "But the probability of that actually happening is near zero."

One way of gauging Sanders’ odds is to look at how many times he hit the 65-percent mark since the first contests in February.

"He has won that large a share of the delegates in a few caucus states," Abramowitz said. "But he has never done it in a primary state other than Vermont, although he came close in New Hampshire."

The Sanders campaign sent us their count of pledged delegates. By their reckoning, he needs 64.17 percent of the remaining delegates available. This is pledged delegates, not the super delegates who are free to throw their support behind whomever they want. (The count can vary, but right now, Clinton has about 510 super delegates to Sanders’ 40, according to NBC News.)

Under Democratic Party rules, the pledged delegates are divided proportionately to the number of votes each candidate gets. That means there are no winner-take-all contests as there are on the Republican side. Using numbers from the Sanders campaign, we compared the number of contests where Sanders has taken at least 64 percent of the vote to the ones when he didn’t. (We rounded down for fairness.)

This table show why analysts give him long odds: 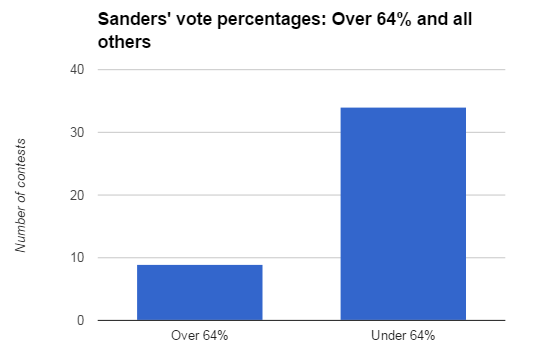 Sanders has crested the 64 percent mark on nine occasions, or about 20 percent of the time.

For those who say that a 20 percent chance is tough but doable, Kyle Kondik, managing editor of Larry Sabato’s Crystal Ball at the University of Virginia Center for Politics, reminds us that not all primaries are equal.

"Sure, Sanders could win California, the biggest prize remaining, but by enough to capture 65 percent of its delegates?" Kondik asked. "Nothing is impossible, but there’s absolutely no reason to think he could do that. Additionally, is Sanders really going to win New Jersey, a mid-Atlantic state, after Clinton generally dominated him in that region? Again, very, very doubtful."

Abramowitz said the numbers don’t give Sanders any room for error.

"Even if Sanders does better than expected in the remaining states, he would only slightly reduce Clinton’s pledged delegate advantage," he said.

Both experts told us that the Democratic Party rule of awarding delegates proportionately makes it very difficult for Sanders to gain much ground.

Clinton’s strength among the super delegates, and her overall lead of about 3 million votes, further weigh him down.

Outside the realm of theory, however, his performance in past contests shows it is far more likely that he won’t hit the winning percentage he needs. The proportional allocation rule works against Sanders, leaving him no room to fall short.

Sanders' claim is accurate with a major caveat. We rate the claim Mostly True.

Washington Post, Yes, Bernie Sanders can force a contested convention. That doesn’t mean he can win one., May 2, 2016