Gov. Gregg Abbott of Texas posted this tweet about the Texas economy Aug. 30, 2016.

CORRECTION, 2:50 p.m., Sept. 15, 2016: After this fact check posted, readers pointed out we'd presented Texas and California GDP figures in billions of dollars when relevant figures actually reflected productivity in the trillions of dollars. We made appropriate changes. Our rating of the claim didn't change.

In a tweet adorned with images of a rocket, a wind turbine, a steer, a factory and a microscope, Texas Gov. Greg Abbott declared: "If Texas were a country, it would have the 10th highest GDP in the world."

If so, that’s gained ground. When we looked into a 2012 claim comparing productivity in Texas versus the nations of the world, Texas ranked 14th internationally.

So, we decided to put Abbott’s statement to the Texas Truth-O-Meter.

The fine print in Abbott’s tweet states that it's based on information from Glenn Hegar, the Texas state comptroller, and from the International Monetary Fund and Bureau of Economic Analysis.

When we asked, Lauren Willis of the comptroller’s office emailed us its chart indicating that in 2015, Texas had a gross domestic product of $1.59 trillion -- placing it 10th among countries behind the U.S. ($17.95 trillion) and eight countries including Brazil ($1.77 trillion). The chart shows Texas ahead of No. 11 Canada ($1.55 trillion) as well as Korea, Russia, Australia, Spain, Mexico and four other countries.

GDP, the most-used measure of national economic output, is defined as the market value of goods and services produced by labor and property in country. 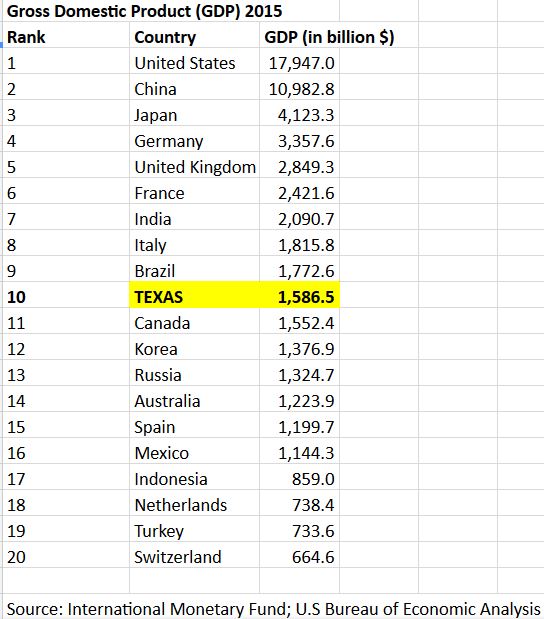 For our part, we found 2015 GDP figures posted in April 2016 by the International Monetary Fund matching the GDP figures in the comptroller’s chart. Willis also pointed out a World Bank breakout of GDPs by nation for 2015; the presented figures didn’t perfectly align with the comptroller’s chart, we found, though the ranking of the top 10 countries did.

Willis also sent a web link to the bureau’s U.S. and state-by-state GDP figures for 2015 and previous years. From the BEA, we downloaded figures indicating that in 2015, Texas had the GDP of $1.59 trillion that Abbott relied on. Then again, more populous California had a GDP of $2.46 trillion, which would have placed the Golden State No. 6 in the world if it were a nation, nudging Texas to No. 11. We recently found too that California in 2015 had greater per-capita productivity than Texas.

Abbott said that if Texas were a country, its economy would rank 10th in the world.

That’s so, figures show, if you leave out a bigger state, California. Considering California, in fairness, Texas would rank 11th in the world.