Donna Campbell
stated on March 22, 2017 in an email blast after meeting with President Trump:
"Seven out of ten doctors are not taking any new Medicaid patients as lower reimbursement rates make it cost-prohibitive."

In a March 2017 email blast, a Texas state senator who's a physician said that in a meeting with President Donald Trump, she’d promoted federal block grants as a way to give states more sway over the costs of Medicaid, the decades-old federal-state insurance program for the poor and disabled.

Donna Campbell, R-New Braunfels, then declared: "Seven out of ten doctors are not taking any new Medicaid patients as lower reimbursement rates make it cost-prohibitive."

A Senate aide to Campbell, Curtis Buckley, said by email that Campbell based her 7-out-of-10 statistic on a 2012 Texas Medical Association survey indicating 44 percent of doctors were declining new Medicaid patients, 26 percent limited such patients and 31 percent accepted new Medicaid patients without restriction.

Indeed, in 2013, we found Mostly True a claim tied to that survey that 31 percent of Texas physicians were accepting all new Medicaid patients. Those figures, we noted, were based on poll responses rather than hard numbers.

Both surveys, that is, indicated about four in 10 Texas practices not accepting new Medicaid patients.

Levine, asked why the association surveys suggest some inching up in the share of Texas physicians accepting all Medicaid patients, said a factor was a provision in the 2010 Obamacare law that temporarily raised Medicaid rates paid for services by certain physicians.

His nudge led us to find another Merritt Hawkins study, were released just before Campbell made her claim. It indicates that nationally as of early 2017, 53 percent of 1,414 contacted physician practices in major metro areas were accepting Medicaid insurance with 60 percent of 494 practices in mid-sized metro areas doing so.

The 2017 report said: "The rate at which physicians accept Medicaid can vary for a number of reasons. In some cases, reimbursement rates provided by Medicaid to particular specialists may be below their cost of providing services. If not actually below costs, Medicaid reimbursement often is relatively low compared to that offered by other payers, and busy physicians may have no economic incentive to see Medicaid patients. In other cases, the process of billing for and receiving Medicaid payment can be problematic and some physicians choose to avoid it."

A Merritt Hawkins spokesman, Phil Miller, pointed us to yet another report, though its focus wasn't on acceptance of "new" Medicaid patients. The 2016 national survey of 17,200 physicians conducted by the company for the Physicians Foundation, which says it seeks to empower physicians to lead in the delivery of high-quality, cost-efficient healthcare, found 16 percent not seeing Medicaid patients, 20 percent limiting such patients and 64 percent accepting Medicaid patients. A chart based on the survey showed variations among states -- and that nearly 30 percent of Texas physicians did not accept Medicaid patients.

Next, we asked the Texas Health and Human Services Commission for data on Texas physicians and Medicaid patients. By email, Christine Mann sent a spreadsheet indicating that in fiscal 2016, which ran through August 2016, 63,915 Texas physicians were enrolled in Medicaid, including 31,585 primary-care doctors.

The sheet further says that as of September 2016, per the Texas Medical Board, 74,098 physicians were licensed to practice in Texas. So, about 85 percent of the state’s physicians had a connection to Medicaid, though Levine separately said that could overly represent doctors who only occasionally treat Medicaid patients in emergency rooms and in unusual circumstances.

But the commission’s data showed that only 32,130 Texas physicians reported a paid Medicaid claim in fiscal 2016. Those doctors amounted to about 43 percent of physicians licensed to practice in the state.

Yet there’s a twist to that too, Miller helped us recognize: Data tracked by the Texas Department of State Health Services shows that in 2016, the state had 50,948 "direct patient care physicians," meaning doctors who worked directly with patients as opposed to those who were researchers, administrators or teachers. If you assume direct-care doctors predominantly submitted the tallied paid claims, then you can hypothesize that 63 percent of active physicians had a paid Medicaid claim.

For broader perspective, we turned to the Henry J. Kaiser Family Foundation, which focuses on national health issues and said in a March 2017 web post that nationally, about 70 percent of office-based physicians accept new Medicaid patients.

That figure is a little old; it traces to a 2015 study based on the 2013 National Electronic Health Records Survey, a nationally representative survey that collects information on physician and practice characteristics. According to the results, 68.9 percent of U.S. office-based physicians who accepted any new patients were accepting new Medicaid patients--with 57.6 percent of such Texas physicians doing so: 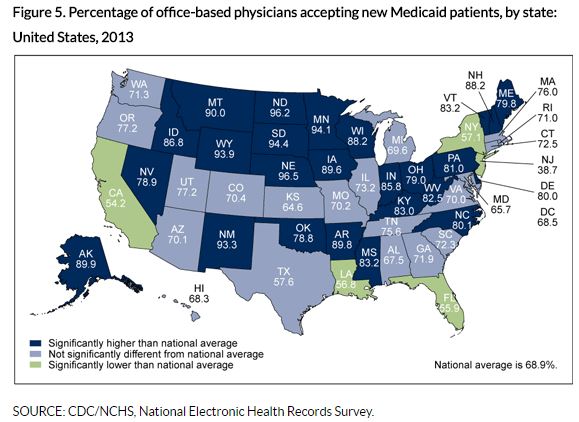 We sought more recent data and Jeff Lancashire of the National Center for Health Statistics emailed us an excerpt from the 2015 NEHRS survey indicating 28.2 percent of primary-care physicians weren't accepting new Medicaid patients with 71.6 percent accepting such patients--with Texas-specific results yet to be posted, the center's Corey Slavitt told us.

After Campbell made her statement, FactCheck.org, a fact-checking effort based at the University of Pennsylvania, posted a lengthy analysis of flaws in claims about low physician participation in Medicaid. "There are no continuous measures on Medicaid participation," that story says, "but federal statistics gathered over recent years show that the percentage of physicians accepting new Medicaid patients has remained around 70 percent," though the story says participation rates have been affected by differences in state-specific reimbursement rates.

Campbell’s aide, Buckley, said her reference to lower Medicaid fees tied to her professional background and her understanding that Medicaid fees have long been a factor in doctors not accepting or limiting new Medicaid patients.

Buckley also pointed out a June 2016 analysis published by the TMA confirming that in Texas, "reimbursement amounts for the same procedures differ among payers, with public payers (Medicare and Medicaid) setting a much lower rate than" what private payers offer.

Our hunt for expertise led us to Stephen Zuckerman, co-director of the Health Policy Center at the Washington, D.C.-based Urban Institute, which has surveyed state-set Medicaid fees since 1993. On March 5, 2017, the institute posted a report co-authored by Zuckerman indicating that in July 2016, Medicaid fees paid Texas physicians amounted, on average, to 65 percent of fees paid in the state by federally funded Medicare; nationally, Medicaid fees averaged 72 percent of Medicare fees.

Another expert, the Kaiser foundation’s Julia Paradise, said by phone that Medicaid fees and physician participation comprise part of the story. A broader issue, she said, is whether Medicaid beneficiaries have access to providers.

In that vein, Zuckerman pointed out a University of Pennsylvania study published in March 2017 finding that in 2016, appointments could be scheduled by phone by Texas Medicaid patients with about 60 percent of primary-care physicians--an insignificant change from 2013, the researchers wrote. Texas private-pay patients were able to schedule appointments with more than 80 percent of primary-care physicians, the researchers found.

Campbell said: "Seven out of ten doctors are not taking any new Medicaid patients as lower reimbursement rates make it cost-prohibitive."

Texas Medicaid payment rates indeed trail those for other kinds of insurance.

But the crux of this statement, the 7-in-10 statistic, lacks factual footing partly because it combines different answers to an outdated Texas physician survey.

Chart, "2016 Survey of American Physicians:  Where are physicians not seeing  Medicaid patients?," the Physicians Foundation, undated (received by email from Phillip Miller, April 5, 2017)