Greg Abbott
stated on July 14, 2017 in his speech kicking off his re-election campaign:
"More Texans have jobs today than ever before in the history of our state."

Texas Gov. Greg Abbott drew cheers from supporters in San Antonio as he vowed to keep the Texas economy rocking and laid a claim to history.

The Republican governor, kicking off his re-election campaign, said in July 2017: "And since I took office, in just the last two and a half years, in Texas, we’ve added more than 450,000 new jobs. More Texans have jobs today than ever before in the history of our state."

That jobs-gained number sounded a little low. According to Bureau of Labor Statistics figures we drew from a bureau economist, Cheryl Abbot, when Abbott took office in January 2015, the state was home to nearly 11.8 million non-farm jobs. As of June 2017, that count was up by about 507,500, exceeding 12.3 million.

We decided to check whether more Texas residents have jobs than ever before.

Abbott’s campaign didn’t answer requests for the basis of the claim. Meantime, economists concurred that according to bureau figures drawing on U.S. Census Bureau surveys, more than 12.8 million Texas residents had jobs from April 2017 through June 2017--with the April 2017 count of 12,872,506 employed people setting a record, though the tally subsequently slid marginally, reaching 12,848,980 in June 2017.

A bureau-provided chart shows the dip in employment after that count had mostly steadily increased since January 2015: 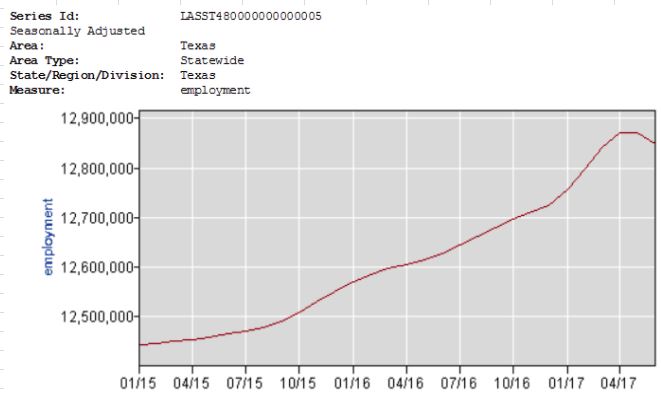 The economists we queried noted that because Texas continues to grow in population, it makes sense, barring economic disaster, that you’d see more people having jobs year after year.

"Status quo in Texas," Mark J. Perry, an economist at the University of Michigan-Flint, told us by email, "it’s always had steady job growth."

Perry passed along a chart showing the nearly uniform annual upticks in employed Texas since 1939: 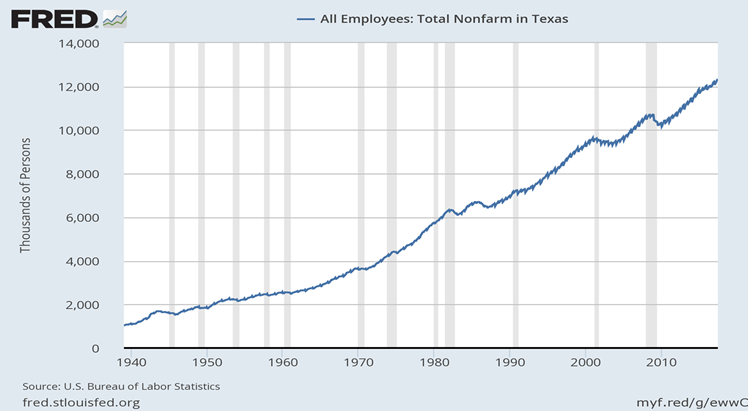 SOURCE: Chart based on data posted by Federal Reserve Bank of St. Louis (provided by email from Mark J. Perry, Ph.D., scholar at The American Enterprise Institute, professor of Finance and Business Economics, School of Management, University of Michigan-Flint, July 28, 2017)

So, Abbott was mostly right about the record count of Texans with jobs at the time he spoke.

Other indicators provide context, however.

For instance, the month before Abbott kicked off his re-election effort, the state’s unemployment rate of 4.6 percent--as in the share of able workers unsuccessfully seeking employment--was not a record low. We counted 59 months since 1976 when the Texas jobless rate was lower, per an Abbot-provided chart.

Also, a ratio that compares the number of people with jobs to the population as a whole was higher for Texas and other states in the 1990s, a facet explored by PolitiFact in Washington in July 2016. That story also noted that nationally since the end of the Great Recession, the U.S. employment-to-population ratio had climbed, slowly but fairly steadily.

When we asked, Abbot shared bureau figures rooted in Census Bureau survey findings to represent changes in the Texas employment-population ratio. Similarly, economist Tara Sinclair, an associate professor at George Washington University, drew on bureau figures showing that the state’s employment-population ratio exceeded 65 percent from 1995 through 2000 but fell to 61.5 percent in 2014 and to to 60.9 percent and 60.7 percent, respectively, in 2015 and 2016. In the latter year, the bureau says, that ratio reflected 12,671,801 Texans with jobs out of 20,861,611 residents.

By email, Sinclair wrote that similar "to the national pattern for the employment-population ratio, Texas is still low relative to its historical peak (although doing a bit better than the national ratio)." 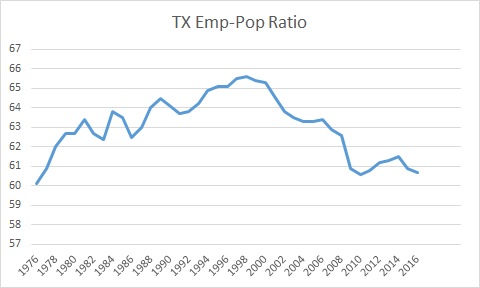 Abbott said: "More Texans have jobs today than ever before in the history of our state."

By raw numbers, the more than 12.87 million employed Texans in April 2017 set a record though that count had dipped to 12.85 million by the time Abbott spoke. Also, the state’s June 2017 jobless rate, 4.6 percent, exceeded the rate in more than 50 months since 1976 while Texas in 2016 (like the nation) had an employment-population ratio trailing what it used to be.

PolitiFact Rating:
Mostly True
"More Texans have jobs today than ever before in the history of our state."
Greg Abbott
Governor of Texas