Donald Trump
stated on August 22, 2017 in a rally:
"There aren't too many people outside protesting" his speech at the Phoenix Convention Center.

President Donald Trump opened his campaign rally in Phoenix noting a matter of importance to him: crowd sizes.

"What a crowd," Trump said Aug. 22 about his supporters inside the Phoenix Convention Center, the site of one of his first major campaign rallies two years earlier.

He immediately drew attention to another group of people: "And just so you know from the Secret Service, there aren't too many people outside protesting, OK. That I can tell you."

Trump downplayed the number of protesters at other points in his 75-minute speech.

But the president’s narrative was at odds with what TV news viewers had seen for hours leading up to Trump taking the stage. The coverage on national networks showed sizeable crowds out on the streets carrying signs criticizing the president and his response to the Charlottesville, Va., riots ignited by supporters of white supremacist and anti-Semitic groups.

The Phoenix Police Chief also said there were "tens of thousands" of people out on the streets.

As Trump delivered his speech, he sought to spotlight the people inside the convention center, asking cameras to put them on TV "because it is rather incredible." (CNN obliged.)

Trump was also interrupted by a protester inside the convention center as he defended his series of responses to the violence in Charlottesville.

"Don't bother, it's only a single voice. And not a very powerful voice," Trump said. "How did he get in here? He's supposed to be with the few people outside." 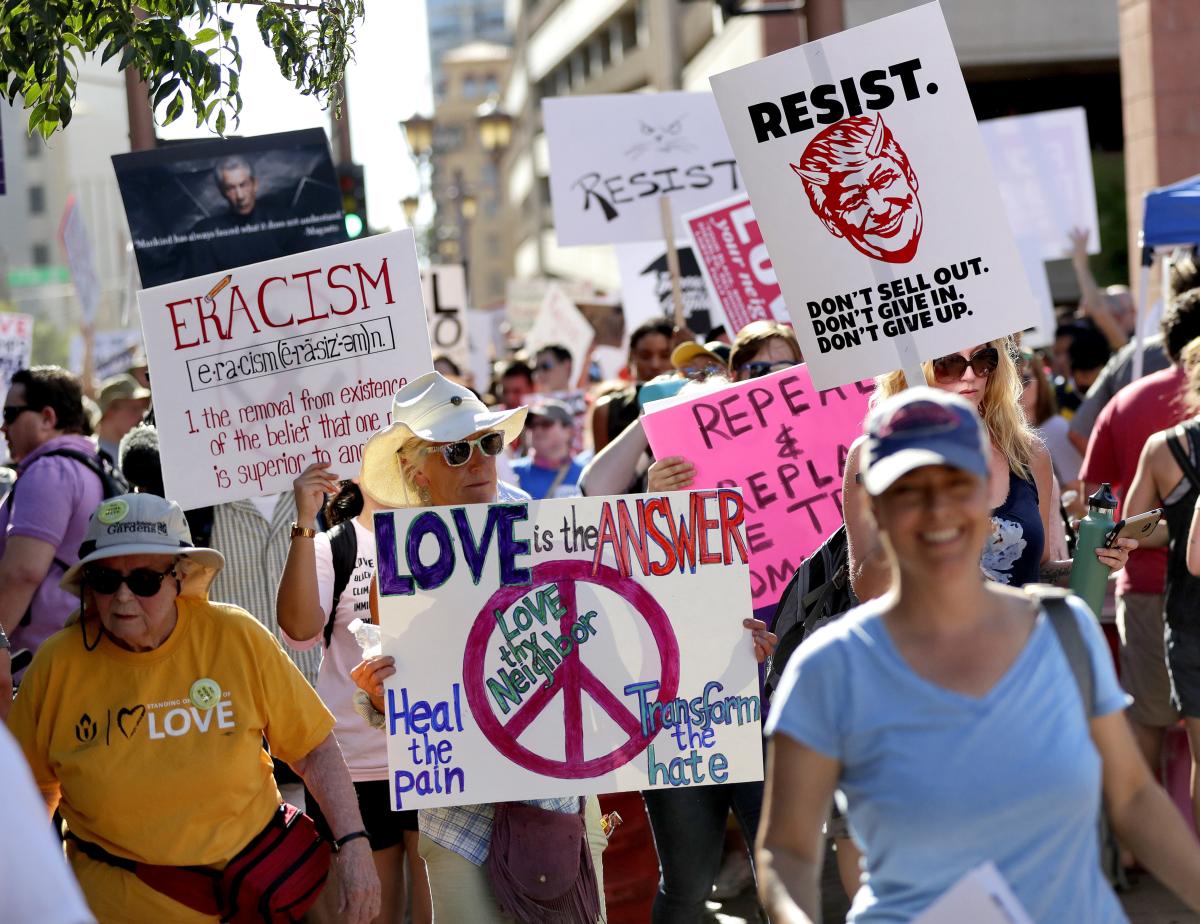 (People protest outside the Phoenix Convention Center on Aug. 22, 2017, in Phoenix. Protests were held against President Donald Trump as he hosted a rally inside the convention center. / AP)

"How about all week they're talking about the massive crowds that are going to be outside. Where are they? Well, it's hot out. It is hot. I think it's too warm," Trump said. "You know, they show up in the helmets and the black masks, and they've got clubs and they've got everything."

The next day, Trump continued boasting about the amount of people who showed up to support him.

"Phoenix crowd last night was amazing - a packed house. I love the Great State of Arizona. Not a fan of Jeff Flake, weak on crime & border!" another tweet said.

Phoenix crowd last night was amazing - a packed house. I love the Great State of Arizona. Not a fan of Jeff Flake, weak on crime & border!

We did not get a response from the White House when we requested more information on Trump’s claim of few protesters. We asked the U.S. Secret Service — which Trump cited as his source of information — about their estimates of crowd sizes outside the convention center, but did not get a figure.

"For operational security purposes we do not publicly discuss the methods and means on how we conduct our protective operations," said Mason F. Brayman, Assistant Special Agent in Charge for the Secret Service.

Leading up to the rally, Phoenix police chief Jeri Williams said the department would have "maximum staffing" and emphasized its experience handling other major events, such as Super Bowls.

In a press briefing after the events, Williams said there had been "tens of thousands" of people downtown. (Trump said he brought 15,000 people into the convention center. The Phoenix Fire Marshal approved capacity up to 19,000 people.)

"We had tens of thousands of people downtown peacefully exercising their First Amendment rights," Williams said. "What’s unfortunate is that a very small number of individuals chose criminal conduct." 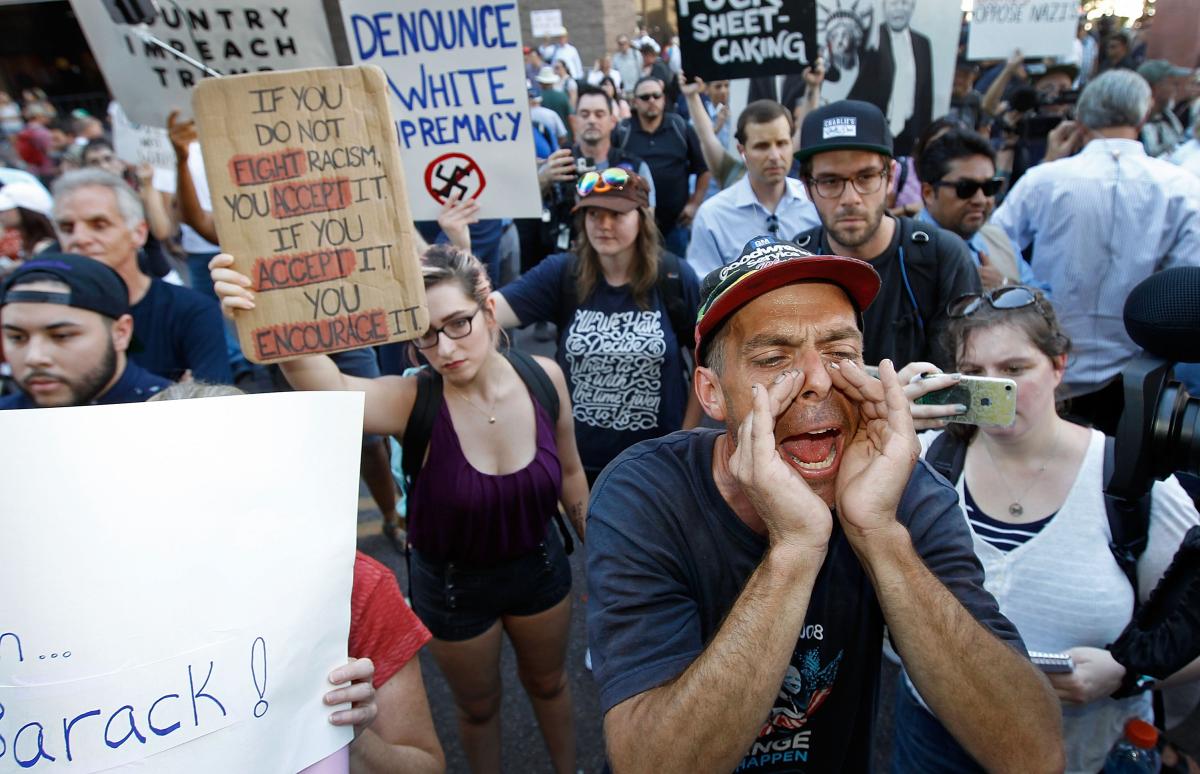 (Protesters outside the Phoenix Convention Center hold up anti-President Donald Trump signs and shout back at Trump supporters waiting to enter a rally by Trump on Aug. 22, 2017, in Phoenix, Ariz. / Getty)

Azcentral.com reported that demonstrators outside the convention center "largely refrained from violence" throughout the day. That changed after Trump’s speech ended and a few people threw rocks and bottles at police. Police used pepper spray and pepper balls to disperse protesters.

Local media also said there were thousands of anti-Trump protesters out on the streets. Some photos show protesters held back by barricades outside the convention center where Trump was speaking.

Several videos and photo galleries from local media depict the crowds of protesters, which included people advocating for immigrant rights and against hate groups.

Views from the roof of the parking lot across from Phoenix convention center. People packed on every floor. #trumprally protest pic.twitter.com/pHMc1rbAik

Trump at a rally in Phoenix said, "There aren't too many people outside protesting."

Thousands of people were out on the streets of Phoenix protesting Trump’s speech, according to multiple media accounts and the Phoenix police chief, who said the city’s downtown had "tens of thousands" of people exercising their right to free speech.

PolitiFact Rating:
False
https://www.youtube.com/watch?v=gxwe16H2g9U&t=147s
"There aren't too many people outside protesting" his speech at the Phoenix Convention Center.
Donald Trump
President of the United States

Abc15.com, Trump protests in Phoenix: Experience the conflict between attendees and protesters, Aug. 22, 2017