Donald Trump
stated on December 8, 2017 in a rally in Pensacola, Fla.:
"Black homeownership just hit the highest level it has ever been in the history of our country."

When President Donald Trump noticed some African-American support at a recent rally in Pensacola, Fla., he offered a statistic about black homeownership.

"Look at these guys, ‘Blacks for Trump,’ " Trump said, quoting their sign, on Dec. 8, 2017. "I love you. I love you. By the way, now that you bring it up, black homeownership just hit the highest level it has ever been in the history of our country. Congratulations."

He brought up the claim in the company of other boasts about enhanced 401(k) accounts, consumer confidence and job growth since the start of the year. But black home ownership hasn’t hit a new record high. (The White House did not respond to an inquiry.) 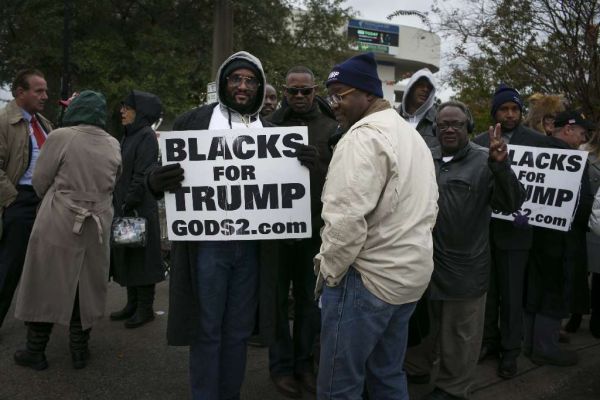 Attendees hold "Blacks For Trump" signs while waiting in line for a campaign rally with President Donald Trump in Pensacola, Fla. (Bloomberg/Nicole Craine)

According to Census Bureau data, black homeownership peaked in 2004 at 49.1 percent. It has fallen incrementally almost every year since. In fact, the rate is now about one-sixth lower than it was at its peak.

In fact, in 2005 the Hispanic homeownership rate overtook that of African-Americans, with the two groups diverging ever since.

So why has the African-American homeownership rate fallen for the past dozen years? More than anything, it’s been the Great Recession and its aftermath.

"Blacks were hit disproportionately hard by the foreclosure crisis, in part because they were heavily targeted for subprime and other risky mortgages," said Alex Schwartz, a professor at the Milano School of International Affairs, Management, and Urban Policy at the New School. Those types of mortgages were at the center of the housing crisis that helped cause the recession.

As for the continued decline, Schwartz said, "banks and other mortgage lenders adopted much stricter underwriting standards after the crisis, making it far more difficult to qualify for mortgage credit. Since black and Hispanic households tend to have lower incomes and much less wealth than other groups, they are even less likely than before the crisis to purchase homes."

Meanwhile, rising inequality and slow income growth for the bottom 80 percent of the income spectrum have made it more difficult for families to accumulate the savings necessary to make the downpayment to purchase a home.

"Our research shows that homeownership was not a conduit to wealth accumulation either in the housing boom or in the Great Recession," said Sandee Newman, who directs the Center on Housing, Neighborhoods and Communities at Johns Hopkins University.

Trump said, "Black homeownership just hit the highest level it has ever been in the history of our country." In reality, the black homeownership rate peaked in 2004 and has fallen almost every year since, due in large part to the Great Recession and its aftermath. We rate the statement False.

PolitiFact Rating:
False
"Black homeownership just hit the highest level it has ever been in the history of our country."
Donald Trump
President
https://www.realclearpolitics.com/video/2017/12/09/full_video_trump_holds_make_america_great_again_rally_in_pensacola.html

Email interview with Alex Schwartz, professor at the Milano School of International Affairs, Management, and Urban Policy at the New School, Dec. 11, 2017

Email interview with Sandee Newman, director of the Center on Housing, Neighborhoods and Communities at Johns Hopkins University, Dec. 11, 2017