Marco Rubio
stated on January 27, 2017 in an interview:
"In Florida, 70 percent of the people here illegally came on an airplane. They overstayed a visa."

U.S. Sen. Marco Rubio supports President Donald Trump’s promise to build a wall at the Mexican border but says it won’t address the main path that undocumented immigrants use to arrive in Florida.

"In Florida, 70 percent of the people here illegally came on an airplane," Rubio, a Florida Republican, told reporters while visiting growers in Immokalee Jan. 27. "They overstayed a visa -- the wall isn't going to address that."

Rubio, who along with Trump advocated for implementing a system to track visa overstays, is one of many politicians to raise concerns about immigrants overstaying their visas -- in 2015 he said that nationally 40 percent of illegal immigrants had overstayed a visa, a claim we rated Mostly True. But in Florida, is the rate really 70 percent?

We found no comprehensive data from the federal government to back up Rubio’s point and his spokespersons didn’t respond. However, a former government official and longtime researcher about the undocumented population came up with an estimate for Florida that was close to Rubio’s number.

Although there are legislative requirements to track nonimmigrants’ entry into and exit from the United States, the federal government has struggled to accurately count visa overstays.

What we know about the number of immigrants who overstayed their visas nationally is largely based on either recent incomplete data from the federal government or data that is several years old or estimates.

In 2016, the Department of Homeland Security estimated that out of 45 million U.S. arrivals by air and sea whose tourist or business visas expired in fiscal year 2015, about 416,500 people remained in the country in 2016.

However, that data only covers a small slice of the undocumented population, capturing one year of data and omitting people who arrived via land. Also, the report did not provide a breakdown by state.

In 2006, the Pew Research Center estimated that as much as "45 percent of the total unauthorized migrant population entered the country with visas that allowed them to visit or reside in the U.S. for a limited amount of time."

That report relied on a 1997 study from the Immigration and Naturalization Service, which concluded that in 1996, 41 percent of illegal immigrants had entered the United States legally.

There have been other estimates of overstays (though they are also old): In January 2003, an INS report said that 33 percent of the illegal immigrant population in 2000 had entered the country legally. A 2004 report from the General Accounting Office, based on 2000 data, estimated visa overstays ranged from 27 to 57 percent.

Since the U.S. government has not provided an overstay rate for the entire unauthorized population in recent years, the only way to come up with a figure is an estimate.

Robert Warren, a former INS demographer whose work was a part of that 1997 INS report, said that in recent years relatively more immigrants have overstayed their visas than have "entered without inspection." 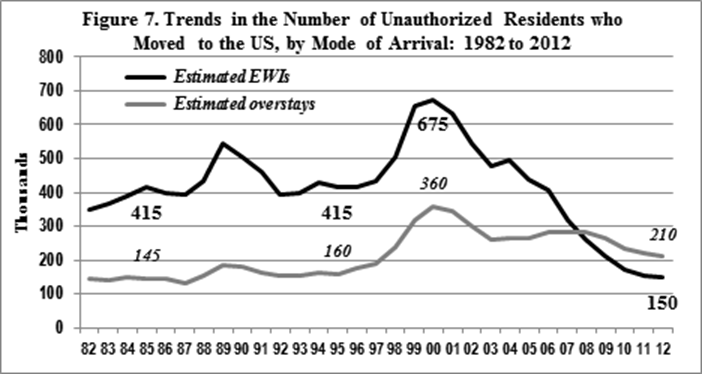 The percentage of undocumented immigrants coming from Mexico dropped significantly during the past 15 years -- and that’s a key country for the group of immigrants who cross the border illegally without a visa.

Warren, who is now a fellow at the nonpartisan Center for Migration Studies, did some calculations for PolitiFact Florida.

Warren used the Center for Migration Studies’ estimates of the undocumented population in 2014 based on data from the Census Bureau’s American Community Survey. Those estimates show about 10.9 million undocumented immigrants living in the United States, including 710,000 in Florida.

Using those assumptions, he concluded that in Florida an estimated 430,000 of 710,000 undocumented immigrants -- 61 percent -- were visa overstayers.

It’s not a surprise that Florida’s undocumented immigrant population would include a higher percentage of visa overstayers than the national average.

While most people crossing the border illegally come from a few countries including Mexico, undocumented immigrants who come from countries in South America, Asia or Europe are nearly all visa overstayers, he said.

"What it comes down to is Florida has a higher mix of people who don’t come from Mexico or Central America than the country as a whole," he said.

However, Warren said that the percentage of visa overstayers in Florida probably would be higher if you just looked at arrivals in the past 10 years.

"To make estimates in this area of research you must make some assumptions based on the best information you have -- that is what I have done here," he said.

We sent Warren’s estimate to other immigration experts, including Jeffrey Passel at the Pew Research Center, a nonpartisan "fact tank" that doesn’t take policy positions, and Jessica Vaughan, who works for the Center for Immigration Studies, which advocates for low levels of immigration.

Both Passel and Vaughan said Warren’s estimates were reasonable, although Vaughan said his starting point numbers for the size of the undocumented population are too low.

"Warren’s calculations on the overstay rates are reasonable, although I sometimes disagree with some of his assumptions," Vaughan said.

Rubio said, "In Florida, 70 percent of the people here illegally came on an airplane. They overstayed a visa."

Rubio’s spokespersons provided no evidence for his claim so we are uncertain of his source. The federal government does not appear to provide comprehensive data on the percentage of undocumented immigrants who overstayed their visa. However, a demographer who has studied the undocumented population for decades estimated that about 61 percent in Florida overstayed their visas.

We rate this claim Mostly True

Department of Homeland Security, Estimates of the Unauthorized Immigrant Population Residing in the United States: January 2012

Journal on Migration and Human Security, "Beyond DAPA and DACA: Revisiting Legislative Reform in Light of Long-Term Trends in Unauthorized Immigration to the United States," 2015

PolitiFact Florida, Rubio says 40% of illegal immigrants stayed in the U.S. after their visas expired, July 29, 2015

Mark Finchem
stated on July 28, 2022 a speech:
Then-Vice President Mike Pence "seized power" from President Donald Trump and undertook "a coup" when he called on federal agencies to stop the Jan. 6 Capitol riot.

Jim Marchant
stated on August 9, 2022 an interview with Steve Bannon:
“Here in Nevada, the DMV registers everybody (to vote) and so that means illegals. They don’t check.”

Tom Cotton
stated on August 31, 2022 a tweet:
“60% of Alaska voters voted for a Republican, but thanks to a convoluted process and ballot exhaustion — which disenfranchises voters — a Democrat ‘won.’"

Mark Finchem
stated on August 25, 2022 a radio show:
“In Arizona, we have flood the zone with fake ballots.”

Facebook posts
stated on August 18, 2022 a TikTok on Facebook:
The Supreme Court will put Donald Trump back in office in October