Donald Trump
stated on June 21, 2017 in a White House tweet:
Obamacare has led to fewer health insurance options for millions of Americans.

In its drive to repeal and replace the Affordable Care Act, popularly known as Obamacare, the Trump administration turned to Twitter with a list of how bad the program is.

"Obamacare has led to higher costs and fewer health insurance options for millions of Americans. It has failed the American people," it tweeted June 21. An accompanying video described multiple failings.

#Obamacare has led to higher costs and fewer health insurance options for millions of Americans. It has failed the American people. pic.twitter.com/xmhT82w3Ii

One of its attack lines jumped out at us as particularly wrong: that Obamacare has led to fewer health insurance options for millions of Americans.

On its face, it is wrong. Before passage of the Affordable Care Act in 2010, many Americans either couldn’t afford insurance or were denied coverage because of pre-existing conditions. That changed with Obamacare.

A 2016 estimate from the U.S. Health and Human Services Department put the number of people who gained coverage at 20 million. That included 2.3 million young adults who took advantage of a provision in the law that allowed them to stay on their parents’ plans until they turned 26. The remaining 17.7 million got coverage through either a private plan or public insurance, primarily Medicaid.

"Americans inherently have more access to care then they did before Obamacare," said Timothy Callaghan, a health policy professor at the Texas A&M School of Public Health.

The drop in the uninsured rate gives another way to look at this. Gallup, a major polling organization, reported that by the first quarter of 2016, the fraction of people ages 18 to 64 without insurance had fallen to 11 percent.

"This marks a record low since Gallup and Healthways began tracking the uninsured rate in 2008," the report said. 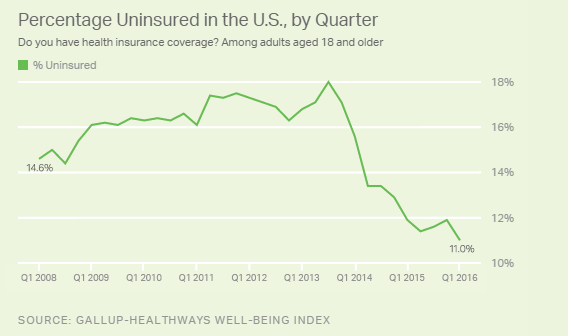 Part of the decline was due to an improving economy. About half of Americans get their insurance through their employer. Part was tied to the individual mandate, the provision in the health care law that required all adults to have insurance. Another factor was the expansion of Medicaid for poor people, an option chosen by about 36 states.

That provided coverage to about 10.7 million people who weren’t eligible before, according to the Kaiser Family Foundation, a trusted source of neutral data.

The White House statement does apply in a more limited sense. The video included the statistic about insurance companies deciding not to offer policies on the health insurance exchanges set up under the law.

The original idea of the exchanges was to have companies competing for business. In many counties, particularly rural ones, it hasn’t turned out that way, said Daniel Polsky, professor of health management at the Wharton School.

"Fewer plan options will be available when compared to the early years of the Affordable Care Act," Polsky said.

He called that "an unfortunate aspect" of the law, but noted that the White House has added to instability inside the exchanges. Despite requests from insurance companies, the administration has not promised to continue payments that make policies affordable, plus it has indicated it won’t enforce the individual mandate.

The exchanges represent a small slice of the insurance market. It’s for people who don’t get insurance through their jobs or a public program like Medicaid or Medicare. The individual market covers about 7 percent of all Americans, and slightly more than half of those policies are sold on the exchanges.

We reached out to the White House for this fact-check and did not hear back before we published.

The White House tweeted that Obamacare has led to fewer health insurance options for millions of Americans.

About 20 million more people have insurance today than before, directly as a result of the new health care law. The White House neglects that critical point.

The sole thread of truth is that with the insurance exchanges set up by the law, the number of carriers has dwindled. That is a real problem, but as experts and insurance companies have noted, that is partly a result of what this administration has done. Its policies on spending and enforcement have undercut the ability of carriers to participate in the exchanges.