Carolyn Maloney
stated on March 16, 2017 in remarks on the House floor:
"More than half of Planned Parenthood facilities are in rural or medically underserved areas."

During debate on the Republican health care bill, U.S. Rep. Carolyn Maloney, D-N.Y., spoke passionately about the impact it will have on women’s health and especially on Planned Parenthood.

"We all know by now that the recent CBO analysis has bad news for millions of Americans, but it has some especially bad news for women," Maloney said on the House floor on March 16, 2017, the same day that the House Budget Committee approved the bill.

Maloney was right that the bill restricts funds for Planned Parenthood. The American Health Care Act has a provision that won’t allow states to use direct spending of federal funds on prohibited entities.  Planned Parenthood is a prohibited entity under the bill because it is a provider that is "primarily engaged in family planning services, reproductive health and related medical care" or "provides for abortion" in any situation besides saving the life of the mother, incest or rape.

We were intrigued, however, by the claim that half of Planned Parenthood facilities are in rural or underserved areas. It’s a tricky thing to measure, but the evidence suggests the claim is sound.

The HRSA is an agency of the U.S. Department of Health and Human Services. The HRSA's programs help provide health care to people who are geographically isolated, or economically or medically vulnerable. The agency identifies areas where health care is difficult to come by.  Planned Parenthood matched up their locations to the HRSA data. 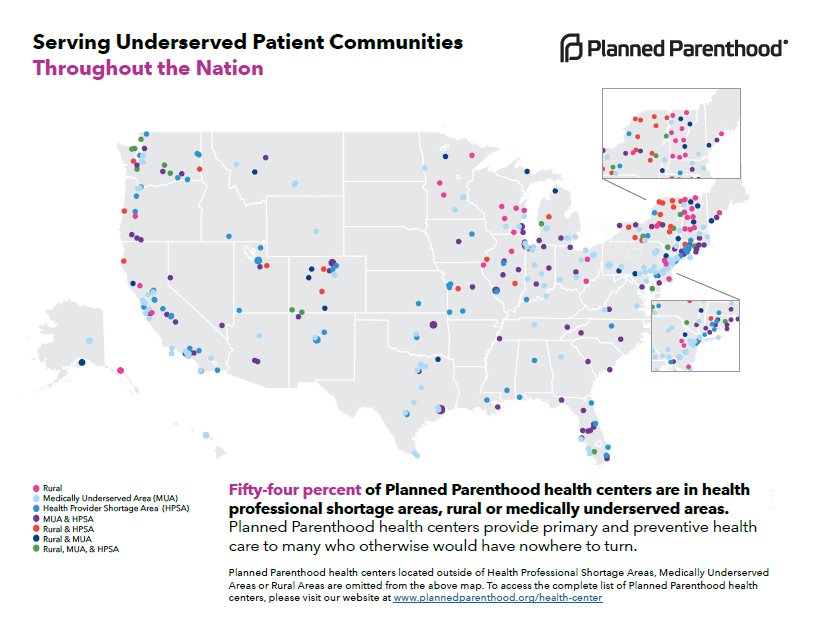 Mark Holmes, an associate professor in health policy and management at the University of North Carolina, told us the government system of identifying underserved areas is reliable.

"The HRSA database for shortage areas is pretty accurate.  In terms of additional context, there are multiple types of shortage areas," he explained.

Holmes said some shortage areas are designated as a "population" shortage area.  "This area is okay in general, but for certain kinds of populations, they may have a tough time getting the care they need," he said.

He used an example of "low-income" populations.  "Medicaid beneficiaries may live in an area with lots of providers, none of whom take Medicaid, so then although it looks like the area is well-served, there is actually a considerable shortage," Holmes said.

We ran this by two other health care experts, and they said that the claim was accurate.

Maloney said, "More than half of Planned Parenthood facilities are in rural or medically underserved areas."

That claim is supported by data from Planned Parenthood and the federal health care database.  Experts familiar with the data told us that there is enough evidence to show Maloney was on target with her claim.

Carolyn Maloney
stated on March 16, 2017 remarks on the House floor:
"More than half of Planned Parenthood facilities are in rural or medically underserved areas."

Jack Kingston
stated on March 12, 2017 an interview on CNN:
"I remember years ago looking at a CBO report that in 1964 predicted that Medicare would cost $9 billion 10 years later. And I think it was already over $100 billion at that point."