Nate Walker
stated on March 20, 2017 in on MissouriNet.com:
"(Charter schools in Missouri) are actually failing in a greater capacity than the public school systems."

Since the confirmation hearing for U.S. Secretary of Education Betsy DeVos, charter schools have been under increased scrutiny.

In Missouri, charter schools have only been built in Kansas City and St. Louis, but a bill now before the legislature may make it easier for the schools to pop up in other towns.

On March 17, the Missouri House of Representatives narrowly passed and sent House Bill 634 to the Senate to allow for the expansion of charter schools. One legislator who didn’t vote in favor for House Bill 634 was Rep. Nate Walker.

The Republican from Kirksville told MissouriNet that Speaker Todd Richardson, R-Poplar Bluff, tried to persuade him to change his mind, but Walker wouldn’t budge. One reason, Walker said, was because "(charter schools in Missouri) are actually failing in greater capacity than public school systems."

But are they? Walker didn’t provide a definition for what he meant by failing, and the Missouri education department doesn’t have a specific definition, either. However, after looking at the education department's performance reviews, the data shows that charter schools are performing about the same as nearby public schools.

When PolitiFact called Walker and asked him where he got his data, he said he got it from a "lot of different things," and began providing some numbers.

When we asked Walker in a phone interview what his definition was for "failing," this was his response:

"Well, they’re not meeting the standards of the (education department). You go check the facts, I’m not a reporter. You’ve got a degree in journalism and understand factual information, but I stand by my comments, and all you need to do is go do your research and find I’m absolutely right. Probably more than right."

We went to the education department to learn more. Sarah Potter, the communications coordinator for the department, wrote in an email, "There are no parameters in state statute for a ‘failing’ charter school."

However, the department does issue an Annual Performance Review score for both charter and traditional public schools to determine how well they’re educating the students. Charter schools are independent public schools freed from certain regulations. They are also subject to other rules defined by their contracts with their sponsors, such as universities, who then hold charter schools accountable for their results instead of the state.

These numbers are correct — though there were 39 districts and not 38 as Walker said — according to the latest data available at the state education department’s website.

Not so fast, said Doug Thaman, the executive director of the Missouri Charter Public School Association.

"One of the concerns we have is that when statements are made like (the one) Walker made, that’s a comparison of charter schools to an entire school district, and that is just not a true comparison," he said. "You can’t compare a single school to an entire district or to the entire state."

What Thaman means is that performance scores are assigned to both individual schools and the districts in which several schools reside, and the scores are often different. He also pointed out that charter schools, which have to accept any student who applies, often educate lower-performing students whose needs haven't been met by traditional public schools, so charter schools score poorly on the performance review because they're helping students who score below grade level catch up.

Thaman suggested it would be better to compare the performance score of individual charter schools to individual competitor public schools within the same district. So we did. 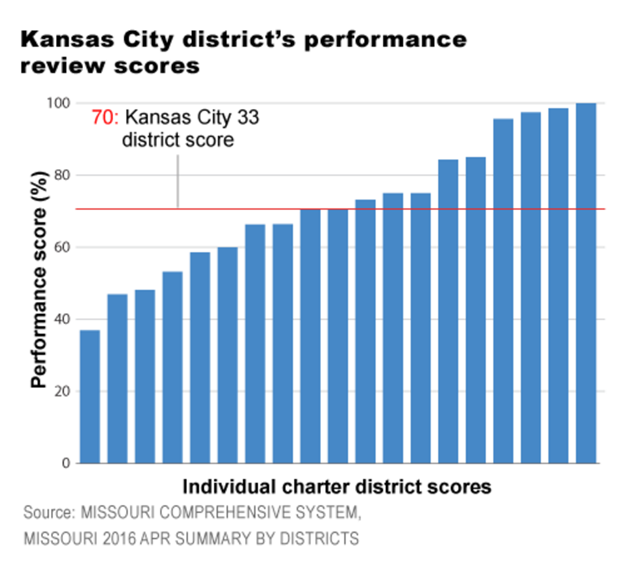 In Kansas City, the charter schools reside inside public school district Kansas City 33, which had an overall performance score of 70 percent, which is also the lowest score to earn an Accredited or above rating.

So overall, it appears that most charter schools in Kansas City are doing just fine when compared to Kansas City 33 district and its schools. 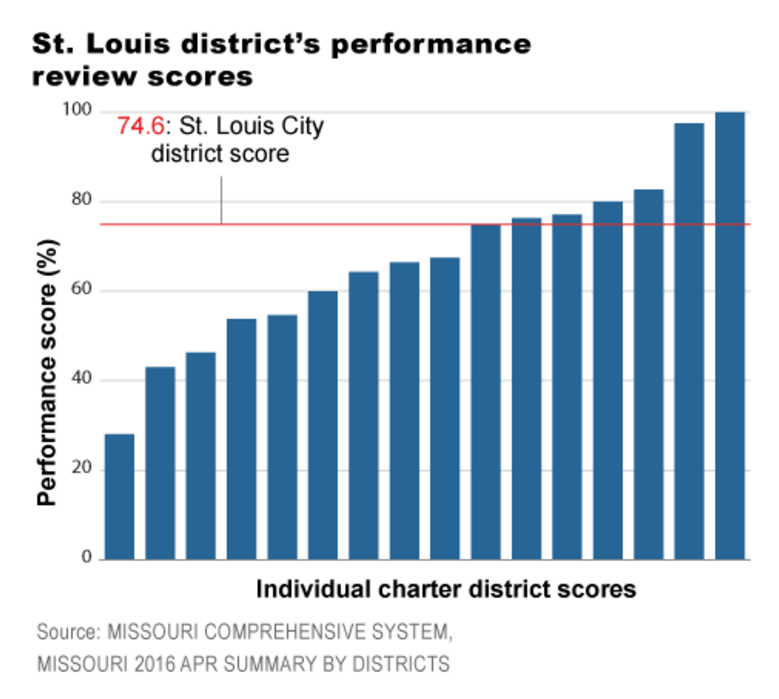 However, when comparing districts’ scores, the scales tip toward the public schools. St. Louis City district has an overall score of 74.6 percent. Nine charter school districts, or 56 percent, score below that. However, 57 percent of the traditional public schools fall below their districts’ performance rate.

Rep. Walker said, "(Charter schools in Missouri) are actually failing in a greater capacity than the public school systems."

Walker’s statement contains an element of truth but ignores critical facts that would give a different impression. We rate this claim as Mostly False.

Nate Walker
stated on March 20, 2017 on MissouriNet.com:
"(Charter schools in Missouri) are actually failing in a greater capacity than the public school systems."

Allen Andrews
stated on February 24, 2017 an article on KMAland.com:
"Missouri is actually the only state that has been forced to borrow money from the federal government to pay for unemployment benefits during each of the last five economic downturns."

Eric Greitens
stated on February 2, 2017 a budget speech at Nixa’s Early Childhood Center:
"K-12 education is getting more money this year than they did last year. ... It is a total increase of 4.1 percent."

Kip Kendrick
stated on January 20, 2017 an interview on KMIZ’s “This Week”:
"Corporate entities are paying a lot less taxes this year than they have in the past. Part of that is from a loophole in a bill that was passed in 2015."