Mary González
stated on May 11, 2017 in House debate of House Bill 2962:
An "abortion procedure is actually safer than a vasectomy."

State Rep. Mary González of Clint made a claim about the relative safety of vasectomies and abortions in May 2017 House floor debate (Austin American-Statesman photo).

A Democrat opposed to an abortion-related measure suggested that a snip exclusive to men has proved less safe than an abortion.

Rep. Mary González of Clint asked the proposal’s author, Rep. Giovanni Capriglione, in May 2017 floor debate: "First and foremost, did you know that an abortion procedure is actually... safer than a vasectomy?"

Capriglione, R-Southlake, replied that he hadn’t researched complications from procedures other than abortion and he also doesn’t believe all outcomes of abortion procedures in Texas are currently reported. His House Bill 2962 requires hospitals to submit reports to the state on abortion complications.

Capriglione added: "Not all medical procedures are equally important."

Maybe not. Still, are abortions safer than vasectomies?

A González aide, Andrea Chevalier, said by email the legislator based her abortion-vasectomy safety claim on figures in a Texas Tribune news story and a Kentucky report.

The cited June 2016 news story says that according to the Texas Department of State Health Services, fewer than 1 percent of Texas abortions in 2014 resulted in any complication to the woman. The story says the overall number of abortions in Texas had dropped to 54,902 from 63,849 in 2013 in the wake of changes in law, advanced by Republicans, expected to drive down the number of abortions by imposing hospital-level safety standards for clinics and requiring physician-providers to hold admitting privileges at nearby hospitals.

Chevalier said that according to a 2006 article by two Kentucky physicians, the incidence of complications such as infection and bleeding from vasectomies can be as high as 15 percent.

The article, published in American Family Physician, includes a chart indicating that how a man’s scrotum is penetrated to begin a vasectomy can result in different complication rates. "No-scalpel vasectomy has been shown to reduce the risk of complications (i.e., bleeding and infection) compared with the incision technique," the article says.

The chart, citing three studies published from 1990 through 2002, shows varied complication rates of 0.2 percent to 15.9 percent--and also wide variations in the results: 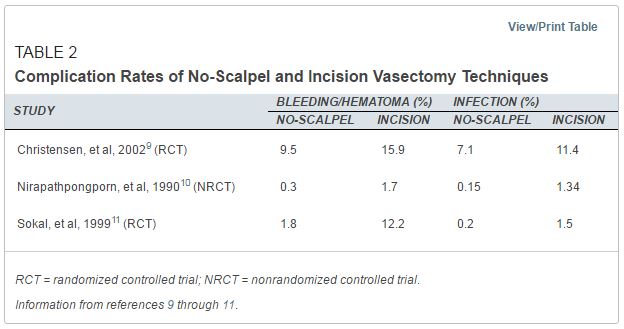 We tried to reach the lead author of the update, Tennessee physician Paul Dassow, and didn’t hear back. We turned next to our own research.

When we queried DSHS officials about complications due to abortions or vasectomies, spokesman Chris Van Deusen said by email the state doesn’t track fall-out from vasectomies.

Van Deusen otherwise pointed us to agency-posted counts indicating that 54,310 Texas residents had abortions in the state in 2015. A separate chart says 52,938 abortion procedures led to no reported complications with 25 procedures resulting in complications, including 10 hemorrhages--which breaks out to a complication rate of less than one-tenth of 1 percent: 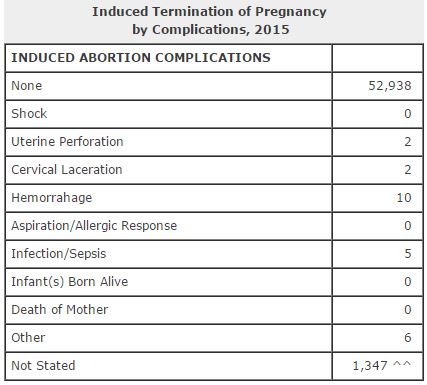 ^^ Abortions that took place outside of Texas.

For national perspective, we emailed Rebecca Wind of the Guttmacher Institute, a reproductive health and abortion rights nonprofit. Wind answered by pointing out the institute’s January 2017 "fact sheet," which states a first-trimester abortion carries a risk of less than 0.05 percent of "major complications that might need hospital care." A footnote notes a California study, published in 2013, that tallied a total of six major complications after 11,487 abortions. The study said complications of any kind--mostly minor--occurred 1.3 percent of the time.

Also to our email inquiry, Barbara Tims of the Texas Medical Association pointed out a 2015 review of 57 studies of abortion complications published from 1980 through April 2015. With few exceptions, the review said, 1 percent or fewer first-trimester abortions resulted in "cervical laceration needing sutures or hemorrhage that required medical management." Also, the report said, physicians who provided antibiotics to women after an abortion said that less than 2 percent of the patients developed infections.

The researchers wrote: "Major complications following first-trimester aspiration abortion were very rare. Unanticipated abdominal procedures and hemorrhage requiring transfusion occurred in ≤0.1% of abortions, and the proportion of patients requiring hospitalization to treat major complications was less than <0.5% in most studies reviewed.

Wind said the institute doesn’t have expertise on vasectomy complications. But she helped us track down a 2005 analysis of available worldwide evidence for a British medical journal that said: "Vasectomy, though safe and relatively simple, requires a high level of expertise to minimize complications."

An accompanying chart indicates a 2 percent chance of hematoma, meaning swelling due to blood clotting. "The incidence of hematoma formation," the article states, "seems to correlate with the surgical experience. The hematoma rate was 4.6% for those performing 1–10 vasectomies per year, as against 1.6% for those performing 11–50 vasectomies a year," the article states, footnoting a U.S. study published in 1987.

On the high end, the chart shows an average 3.4 percent chance of infection which the article says includes wound, urinary and epididymal infection.

Separately, Tims of the TMA pointed out a July 2016 article from the Canadian Urological Association, footnoted to studies from 1984 through 2007, describing varied complication rates from vasectomies. The article states: "Men must be informed about wound care and the potential for early complications: infection (0.2‒1.5%), bleeding or hematoma (4‒20%), and primary surgical failure (0.2‒5%). Men should also be made aware of late complications: chronic scrotal pain (1‒14%) and delayed vasectomy failure (0.05‒1%)."

We also queried the American Urological Association; by email, spokesman Brandon Corbett guided us to its "Guideline" for physicians, last amended in 2015, which states: "The rates of surgical complications" from vasectomies "such as symptomatic hematoma and infection are 1-2%. These rates vary with the surgeon's experience and the criteria used to diagnose these conditions."

González said an "abortion procedure is actually safer than a vasectomy."

Both procedures rarely have complications, a clarification missing from this declaration. That said, abortion procedures appear to have lower complication rates.

Texas House floor
Thursday, May 11, 2017
2017-05-11
Read More
info
CORRECTION, 12:00 p.m., May 18, 2017: Our initial post of this fact check overstated the percentage chances of complications from abortions in Texas in 2015. We amended the story to present the correct percentage. This correction did not affect our rating of the claim.

Article, "Complications of vasectomy," Annals of the Royal College of Surgeons of England, November 2005 (accessed May 17, 2017)