Florida Agency for Health Care Administration
stated on October 25, 2017 in a news release:
"Under Gov. (Rick) Scott’s leadership, Florida has had much success in lowering the rate of uninsured children."

The vast disruption of Hurricane Irma meant many families risked losing their children’s health insurance coverage due to missed payments.

As the board for the state’s children’s health insurance program prepared to meet about this issue, the Agency for Health Care Administration defended Gov. Rick Scott’s record on insuring children.

The agency sent out a news release with comment from Secretary Justin Senior before the meeting of Florida Healthy Kids, which operates the KidCare insurance program that provides coverage for children ages 5 through 18. Members discussed the possibility of asking the federal government for a waiver to assist families financially burdened by Hurricane Irma but ended up postponing a decision.

Through the agency, the Scott administration said it would work to ensure no children lose their insurance coverage as a result of the hurricane, touting its history of getting kids insured.

"Under Gov. Scott’s leadership, Florida has had much success in lowering the rate of uninsured children," the Oct. 25 news release said.

We wondered if it was fair for the administration to give Scott credit for decreases in the rate of uninsured children, given his general record against public health care expansion.

What does the report say?

According to the report, the uninsured rate has been dropping since before Scott took office in 2011. Florida cut the rate of uninsured children by more than half since 2009.

There are four sources of public coverage in Florida: the largest is Medicaid (2.2 million), followed by the Children's Health Insurance Program (almost 196,000), CHIP-funded Medicaid (about 145,000) and the federal heath care exchange (about 121,000).

The report says Florida’s progress is "largely a result of public coverage eligibility expansions and improvements for children through Medicaid and the Children’s Health Insurance Program that began decades ago."

In addition, the report also gives credit to the Affordable Care Act signed by President Barack Obama. Its implementation "solidified the gains" and "accelerated the positive trend for children."

Scott was a persistent critic of Obamacare and flip-flopped on whether to expand the state’s Medicaid eligibility pool under the federal law. Scott’s most recent position in 2015 suggested the state Legislature should not expand Medicaid, saying it would be "hard to understand how the state could take on even more federal programs."

How the health care law helps kids get insurance

Mallory McManus, a spokeswoman for the health care agency, said "the ACA actually did not alter or expand coverages for children." She noted that Florida, under Scott, reduced its children’s uninsurance rate faster than every other state but one — faster than roughly 30 expansion states.

McManus pointed to two strategies to reduce uninsurance taken by the Scott administration: improving the economy and reducing unemployment; and getting kids enrolled in Medicaid who are already eligible for the program — before they get sick or go to the emergency room.

But health care experts — including the author of the report the agency cited — all said the federal law likely lowered the rate of uninsured children in Florida.

While Medicaid and CHIP eligibility were not technically expanded for children under the ACA, health policy experts said they expected that children would gain coverage due to the new marketplaces, outreach efforts, and the expansion of coverage to parents.

"I think the Affordable Care Act has much more to do with decreasing Florida’s uninsured rate than any actions that have come out of the Legislature and governor’s office," said Anne Swerlick, a health policy expert at the Florida Policy Institute, a nonprofit that examines how policy affects the economy.

(Swerlick said the the Florida Legislature did implement a provision allowing lawfully residing immigrant children to enroll in Medicaid and CHIP without waiting five years, which the Georgetown study includes.)

Joan Alker, who co-authored the Georgetown study, said the ACA has clearly contributed to a sharp decline in the percent of uninsured children in Florida and nationwide. 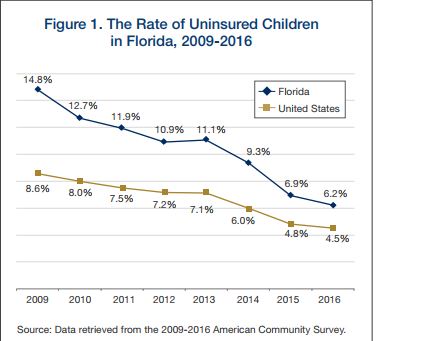 In 2013, the year before the the federal health care law was implemented, Florida’s uninsured rate for children was 11.1 percent, and by 2016 it had fallen considerable to 6.2 percent, she said.

One way the health care law might have helped, which Alker and Fiedler both mentioned, was the "welcome mat" effect.

"In general, the outreach efforts and new coverage opportunities of the ACA created a ‘welcome mat’ for children who were already eligible for Medicaid and CHIP but not enrolled," Alker said.

By contrast, subsidized Marketplace coverage is available to families with incomes as high as 400 percent of the federal poverty level, Fiedler said.

And had Florida decided to expand Medicaid under the ACA, experts said that the expansion would likely improve the state’s child uninsured rate because research has shown that when parents are covered more children get covered.

For example, the Urban Institute found larger increases in children getting insurance in states that expanded Medicaid under the ACA, which was also documented in a study that found that Medicaid expansion to parents had a measurable "welcome mat" effect on their kids.

The state health care agency said, "Under Gov. Scott’s leadership, Florida has had much success in lowering the rate of uninsured children."

The rate of uninsured children has declined dramatically since 2011. But the decline really was in the works since before Scott’s term, in 2009. Also, this claim leaves out important context in the report as to why there’s been a decline.

The report credits the decline to decades of improvements for children in Medicaid and CHIP that have been in the works long before Scott took office. The report also said that the ACA solidified the state’s gain, which Scott opposed.

This statement is partially accurate, but gives too much credit to Scott. We rate this claim Half True.

PolitiFact Rating:
Half True
"Under Gov. (Rick) Scott’s leadership, Florida has had much success in lowering the rate of uninsured children."
Agency for Health Care Administration
main health policy and planning entity for the state
https://capitalsoup.com/2017/10/25/ahca-statement-florida-healthy-kids-board-meeting/

A Closer Look at Medicaid and the Children’s Health Insurance Program, September 2017