Markwayne Mullin
stated on November 3, 2017 in a post on a congressional office website:
"Under the Tax Cuts and Jobs Act, the average American family of four will receive a $1,182 tax cut."

Republicans promised that their tax overhaul would save money for the middle class, and Rep. Markwayne Mullin, R-Okla., was quick to make the case that it did.

"I’m working alongside the White House and other members in the House to lessen the tax burden that currently weighs on so many Oklahomans," Mullin posted on his congressional blog. "Under the Tax Cuts and Jobs Act, the average American family of four will receive a $1,182 tax cut.  Imagine what you could do with $1,182 more in your pocket!"

Mullin's talking point has been popular among House Republicans trying to sell the tax plan. In the past week, we've heard House Speaker Paul Ryan and a Georgia congressman tout the same figure. In each case, they overstated the impact of the tax cut. Mullin did, too, but less so.

Here's what you need to know.

The figure comes from the House Ways and Means Committee, which wrote the tax bill. That committee calculated several scenarios for how the proposal’s changes could affect different types of taxpayers.

The key elements in the committee's calculation involve tax brackets, the standard deduction and the child tax credit.

The example Mullin highlighted refers to a "family of four making $59,000 per year." Here’s the scenario outlined in the House’s fact sheet, using the fictional example of "Steve and Melinda" with two middle school-aged children:

The Ways and Means Committee said they chose a household income of $59,000 because it’s the median household income nationally. (Mullin talked about families and families are not identical to households, but in Oklahoma, the median family income is about $58,000, so the distinction makes little difference in his state.)

So the number adds up, but there are some caveats that show it might not work out this way for all families like Steve and Melinda’s.

Watch out for deductions

The GOP bill eliminates or shrinks a number of widely used itemized deductions, and those factors aren’t taken into account in the figure House estimate.

For example, nearly 9 million people with high medical bills deduct them on the taxes.

The tax cut would fade over time

David Kamin, a tax and budget specialist at the New York University law school, told us that the bill has some wrinkles that can turn a tax cut into a tax hike.

According to Kamin’s calculations, the initial tax cut for the family making $59,000 becomes about a $450 tax increase by 2024 compared to the status quo. Here’s the graph he put together: 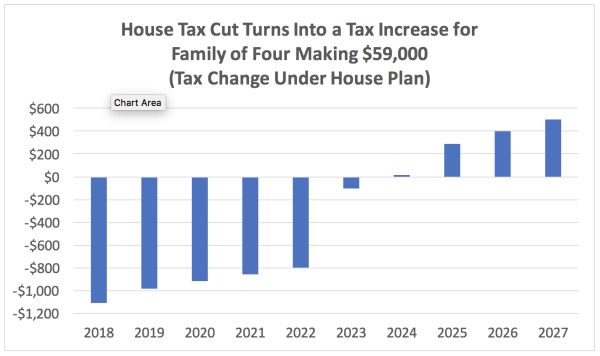 Mullin didn’t promise that the initial tax cut would last, as other Republicans have.

After Mullin made his statement, the congressional Joint Committee on Taxation analyzed the tax plan using a different approach. The committee found that while tax collections from people making under $40,000 would fall at first, they would go up in 2023. The groups that would do the best under the plan would be people making between $100,000 and $200,000, and those making over $1 million a year.

Mullin said that the average American family of four would get a tax cut of $1,182. The number is a reasonable estimate, based on certain assumptions.

What might not be obvious is that families who take advantage of deductions today might see their taxes rise. And even those who benefit immediately might see those gains turn into losses after 2023. So if you think this tax cut would be ongoing, or every year, you'd be wrong.

Unlike his colleagues, however, Mullin didn’t outright promise that the initial tax cut would last for more than one year.

Bloggers
stated on November 6, 2020 a blog post:
Says Nancy Pelosi has “suspicious ties” to a voting software company that was involved in glitches that favored Joe Biden.

Tucker Carlson
stated on November 2, 2020 a Fox News broadcast:
“When large numbers of people in Butler (Pa.) started killing themselves with narcotics, no one in Washington or New York or Los Angeles said a word about it.”

Donald Trump
stated on October 30, 2020 a campaign rally in Waterford, Mich.:
“Our doctors get more money if somebody dies from COVID. … So what they do is they say, ‘I'm sorry, but, you know, everybody dies of COVID.’"

Donald Trump
stated on October 29, 2020 a rally in Tampa, Fla.:
“Nobody's ever seen a number like this… (33.1%) economic growth is four times greater than what the experts expected.”