Matt Gaetz
stated on October 17, 2017 in a tweet:
"Opioid crisis (is) the worst in ObamaCare expansion states!"

As Florida’s lawmakers grapple with the opioid crisis, one U.S. representative says there’s a correlation between states that expanded Medicaid through Obamacare and states affected the worst by the epidemic.

Gaetz’s claim quoted a Tucker Carlson tweet that questioned if "big pharma" is responsible for Congress’ inaction toward the opioid crisis.

Information supplied by Gaetz’s office rests on the notion that patients in states that expanded Medicaid through Obamacare have more access to legal prescriptions that fuel the opioid epidemic. Experts said the theory ignores critical facts and does not take into account the other factors that have led to an increase in opioid deaths.

"It is important to avoid confusing association with causation," said David A. Fiellin, a professor of medicine at Yale School of Medicine. "Just because one event (Medicaid expansion) occurred during a period of increasing opioid deaths, many from illicit sources doesn't mean that it caused the increase in deaths."

Researchers have poked holes in this argument before

Thirty-two states plus D.C. currently have adopted Medicaid benefits to all adults. The expansion for most states went into effect in January 2014. The timeframe matters because the most recent data is from 2015, meaning there’s not a lot of data to work with.

In 2015, the five states with the highest rates of death due to drug overdose were West Virginia, New Hampshire, Kentucky, Ohio and Rhode Island, according to the Centers for Disease Control. All of those states expanded Medicaid.

But there’s little evidence Medicaid expansion is the reason why. Many researchers, for instance, have noted that the overdose death rates were higher to begin with in those states.

Richard Frank, a professor of Health Economics in the Department of Health Care Policy at Harvard Medical School sent PolitiFact Florida a research memo he co-wrote on the issue.

Data he compiled from the CDC showed that the states that expanded Medicaid were experiencing higher levels of deaths due to opioids than non-expansion since 2010. 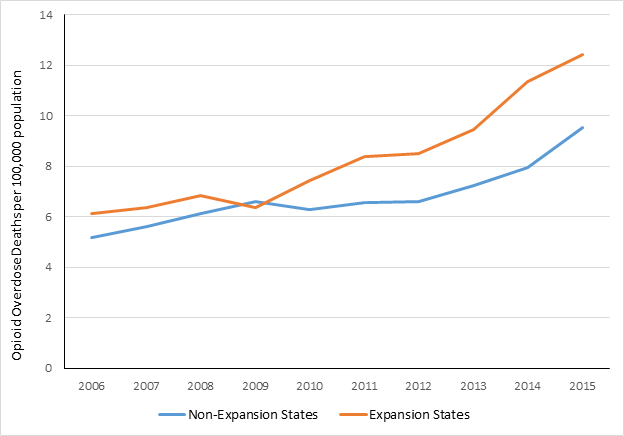 "The opioid epidemic had already hit those states hardest before the ACA even passed and well before the expansions were implemented," the memo said.

Vanderbilt University economist Andrew Goodman-Bacon and Harvard’s Emma Sandoe posit that other factors, including the opioid epidemic itself, led states to adopt the ACA Medicaid expansion in their look on the issue.

"A state with rapidly rising opioid deaths may have decided to expand Medicaid in order to provide drug treatment to more residents," the pair wrote.

Frank and his colleague also found another problem with the Medicaid theory. The memo said since 2013, nearly all the increases in opioid overdoses in the United States is due to heroin and synthetic heroin substitutes.

In other words, it treats all drug overdoses the same. The data Gaetz cited from the CDC includes prescription and illicit drugs. Medicaid coverage does not provide access to illicit drugs.

Data from the CDC shows that since about 2010 the number of deaths from commonly prescribed opiates has not fluctuated one way or another. In contrast, opioid deaths from heroin and other opioids, such as Fentanyl, have increased dramatically in that same time period.

"A significant portion of the increase in deaths was due to deaths involving synthetic opioids other than methadone, which includes Fentanyl," the CDC says.

But the data they cited was last updated in 2009, so Gaetz’s evidence was before the Affordable Care Act was even passed. This argument is common among individuals who believe Medicaid makes drug abuse worse, but it’s not accurate, according to the Goodman-Bacon and Sandone analysis.

"Medicaid patients, especially those who qualify through a disability and many who do not, are more likely to have chronic conditions and comorbidities that require pain relief," the duo wrote.

Gaetz said the "opioid crisis (is) the worst in ObamaCare expansion states."

Gaetz is isolating on one year’s worth of data that, by itself, is flawed. The CDC data at the heart of this claim includes drug overdoses from illicit drugs that are not prescription opioids. And by ignoring a larger window, Gaetz misses the fact that the Medicaid expansion states he’s talking about had an opioid problem before the health care legislation took effect.

Email interview with Richard Frank, a professor of Health Economics in the Department of Health Care Policy at Harvard Medical School, Oct. 23, 2017

Health Affairs Blog, Did Medicaid Expansion Cause The Opioid Epidemic? There’s Little Evidence That It Did. Aug. 23, 2017

PolitiFact, Are a third of people with drug problems on Medicaid, as Elizabeth Warren said? July 18, 2017